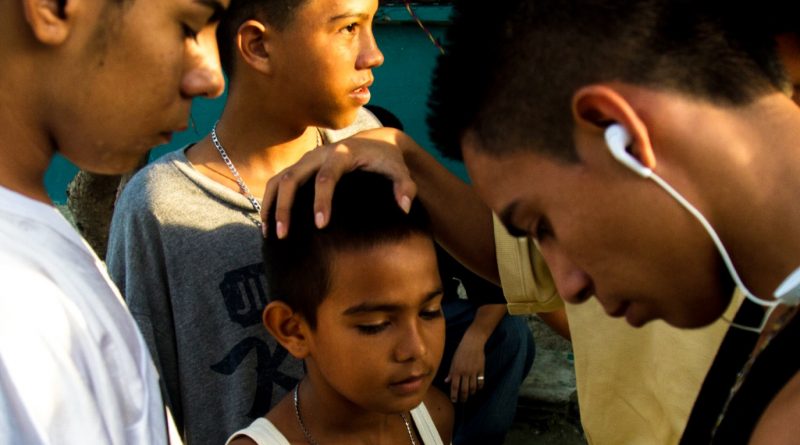 The following is an edited version of a conversation with PRAXIS:

For the purpose of our journal, we want to ask what you how you would define “human security.”

Human security is the natural right to dignity and justice. By dignity, I mean that you can be who you are, love who you want, and live how you want without any fear of repercussion or hate or persecution. By justice, I mean that no one can infringe on your life and that of your family based solely on arbitrary means designed by the aggressor. It is an aspirational concept, of course, but that is how I frame it when I use the phrase ‘human security’ in my texts.

What drew you to photography, and when did you begin your artistic career?

When I was initially drawn to photography, I was an analyst on subjects dealing with gun trafficking and patterns of drug trafficking. I was able to gain access to various different armed groups, as it were, because I was quite skilled at talking my way into places. Once I actually began to meet people, I started witnessing a whole range of situations that introduced me to characters and places that one would normally only see in the realm of film.

After I transitioned from analysis into journalism in 2015, and I retained that ability to speak with people from all walks of life, and I thought, ‘why not pick up a camera.’ Essentially, the short answer for how I came to photography was happenstance, and luckily, the ability to take an aesthetically pleasing picture to tell a story followed.

After starting off doing analysis work and then going into journalism – how have you seen photography tell stories differently, particularly when you’re working in these violent situations in Central America? How has photography allowed you to engage with communities and tell stories in a different way than through written journalism and analytic research?

With written word, a reader must have to imagine the character and what they look like, whereas with photography, imagery removes that nuance or ambiguity, and you see a person as who they really are. If it’s a story about a grieving mother who can’t find a disappeared son, you can see the pain in their face, and if it’s a picture of a conflicted killer trapped in the middle of this lifestyle, you can see in his face that he is blinded by sociopathy and wants resort to violence. If you’re a really gifted writer, you can express that, but a picture will always show something more. Photography eliminates the ambiguity, much more so than the written word.

You’ve noted that your goal is to portray “the human experience” amidst what is being laid out in the media. When you’re moving around and working in different places – from Honduras, to Mexico, to Colombia – what is the common human experience that you’re portraying, and how does the media create a different perception of what is going on?

More so than the media, I’d say the news cycle is something that has a steamrolling, flattening effect. As an example, take “the caravan” from last year. Whereas prior, when the conversation was about Central American life, there was some nuance that was injected into understanding how Hondurans live, and how Salvadorans live, and so forth. But when it came to “the Central American caravan,” it was just completely two-dimensional. It was, on one axis, people leaving, and on the second, where they were going. All the color in between – if they came from the mountains, if they were indigenous, if they were mestizo, if they were city dwellers – that was completely disregarded.

Particularly when it comes to places of conflict and places that have endured a history of violence, my goal is always to show how despite the different forces that tear at a society, however big or however small they are, societies are able to express humanity and imbibe their space and time with different manifestations of culture.

In the case of “the caravan,” I wanted to show how Hondurans would celebrate their very clearly-defined anti-government stance with art and music and flags. These flags would be hand-painted and would have anti-government slogans, and when they were celebrating, they would dance our specific Honduran dance – something that would be lost on someone who wasn’t Honduran. I wanted to show things that wouldn’t fit into a news title that would say “CNN,” or “Univision.” That is where the importance of these paradigm shifting moments of history happen. Those are the minutiae that have always interested me – what occurs in day-to-day life.

With that idea of “day-to-day,” have you built relationships with those who you’ve taken photographs of? How has that personal connection played into your work?

If a story involves someone with whom I developed a relationship, it will come through, either in the pictures or in the text. Behind the scenes, just like any relationship, you can’t pick and choose who your best friend is going to be or who with whom you’re going to be in a relationship. Once you meet someone, you either connect with them or you don’t. But the best-case scenario is when you develop this strong, friendly, platonic relationship and it comes through in the story, because it is truly what happened.

There’s the story of a young man I met named Moises. That is a real friendship. From the moment that we met, we connected. There were 15 other boys and girls there, some of them gang members, some of them kidnappers, some of them killers. Moises was neither, but he exists in that social circle. We instantly connected, and I was the one he called to inform that he was leaving the country. I went as soon as I could to his village to see him off, and then he told me, heart to heart, ‘I don’t think I’m strong enough, I want you to come with me because I’m traveling with my daughter and my girl.’ He confessed to me at that point that he saw me as an older brother. He just wanted someone to support him – which I would have done any way just to document what it looks like for someone to be displaced. These relationships, I think any journalist would tell you, are what define the work that someone does.

Do you ever worry if the impact of your photography will put someone in danger? You mention that the photographs are always consensual, but do you worry about the future impact of the published photography?

Yes. When it comes to the impact, I think about it as two separate gates that I go through. The first gate is the consent portion – is the person okay with me taking this picture? The second gate is, given that I how the rest of the world operates, will taking this picture endanger this person against people they might not know, and that I might not be aware of?

This has already happened to me – when someone said yes to a picture, it was published, and then this person changed their mind. You can’t assume that everything is going to be fine. It’s a gamble most of the time, but you can do your absolute best to get consent that is long-standing.

I think that most people get into sticky situations when they parachute in, take a picture and leave, without gaining the trust of the person in the photo. My method in that regard is to earn trust as fully as possible, and have the people consider me one of them. This tactic works more often than not, but even then, I have the responsibility to consider the consequences: what if someone from a rival neighborhood sees something in a picture that identifies a person as living in a certain neighborhood, and that becomes a motive to go after them?

When you’re working in scenarios of gang violence or conflict ridden areas, does that consent process and the way you gain trust look different? Compared to say, in a home, or with farmers?

Here, I’m referring specifically to conflict in Latin America that is, to a point, very similar between Mexico, Honduras and Colombia. With victims, there’s a strange normalization that takes place, as though speaking to a farmer. However, this changes if you’re speaking with belligerents. It’s a matter of being in a conflict zone, where consent is everything. If it’s not there, the picture won’t exist.

Is there a particular series or photographs or situations that were really challenging or memorable for you?

For the longest time, no one cared about my project, “The Right to Grow Old, which was looking strictly at Honduran life. But when “the caravan” happened, journalists from all over the world were suddenly in Honduras – PBS, Frontline, Xinhua News Agency and the Japanese newswire. There was an entire babble of media, and at the time, I felt as though people were walking into my kitchen. This was memorable because, given by ability to code-switch, I could be a part of both the media and the Honduran community: I could speak like an American, but as soon as I spoke Spanish, it came out as ‘our Spanish.’

The issue with journalism about Honduras is that it usually only regards the question of migration, because, in reality, that’s the key issue foreign media care about in Honduras.

It almost always feels as if, when foreign journalists come to Honduras, they come with an axe to grind. Imagine if I asked an American, every single day or every other week, ‘what is the issue with gun violence? Why hasn’t America stopped the guns?’ If I were to ask that question constantly, all the time, reducing the entire American experience to gun violence, it would drive an American crazy. I’m assuming it would make them feel like a storytelling device for some hack hopeful from the other side of the planet.

This is what it feels like for a lot of people in Honduras – that we’ve become dehumanized, and that our country is just a place for gang violence. People live that, and they don’t have to be reminded that by foreign media who may reduce their whole life experiences to something trivial.

Tomas Ayuso is a photojournalist from Honduras, whose work focuses on how drug war, forced displacement, and urban dispossession in Latin American conflicts impact day-to-day lives.. Ayuso was the winner of the 2019 James Foley Award for Conflict reporting, and his work has been featured in The New York Times, The Washington Post, National Geographic and more. To see his current field journal, primarily featuring Honduras, Mexico and Colombia, please visit his Instagram page.