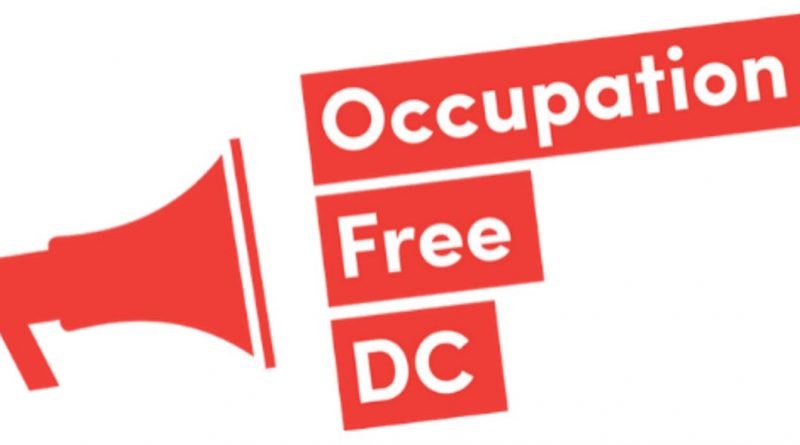 Occupation Free DC (OF DC) is a community safety campaign based in Washington, DC. It is one of the many campaigns that organize in cities around the country to end international “deadly exchanges” between American law enforcement agencies and Israeli security and military forces. On these trips, Israeli military and law enforcement agencies train American police in discriminatory, anti-democratic tactics including racial and religious profiling as well as the suppression of protests. Durham, North Carolina, as a result of the activism of the Demilitarize from Durham2Palestine coalition, was the first city in the U.S. to ban these deadly exchanges in 2018. Groups like Durham2Palestine and OF DC recognize that the violence perpetrated against Palestinians in historic Palestine and Black people in the United States is cut from the same oppressive cloth. We can see this through many “law enforcement” practices, including the fact that security forces in both Ferguson, Missouri and the West Bank attacked protesters with the same brand of U.S.-manufactured tear gas.

OF DC’s topline strategy is to pressure the DC city council to end these exchanges and adhere to the city’s Human Rights Act, which states that municipal employees will not participate in trainings “in or by any facility that discriminates on the basis of race, color, religion, national origin…or other factors unrelated to the need for training.” On these training exchanges, American police departments learn from Israeli security services including Shin Bet (the Israeli Security Agency), the Israeli National Police (including their “riot-control” unit), and the Israeli airport security force. Each of these agencies is infamous for its prejudice, brutality, and abuse of power, all of which are targeted at Palestinians, including children and infants. Palestinians are forced to endure invasive measures at checkpoints, malnutrition in detention facilities, and extreme levels of brutality – including lethal force – in the name of “security.” We in the United States know this dangerous logic all too well. The rhetoric of “law and order” has led to stop-and-frisk, “three strikes” policies, and the deadly and racist war on drugs. American officials who go on these deadly exchange trips visit Israeli prisons and detention facilities, which have high rates of prisoner abuse and neglect, as well as checkpoints along Israel’s apartheid wall, which has been cited by President Donald Trump as an inspiration for his vision of a wall at America’s southern border.

Our campaign believes that real safety means investing in our community, not in biased police trainings. I organize with OF DC because I am a Black resident of the District who knows that Palestinians are living with second-class citizenship under an unjust, violent government. When I moved to D.C., I was glad to find a political home that recognized the parallels between state violence against Black people and Palestinians, and understood that the intersectionality of oppression also requires an intersectional analysis and praxis. Our campaign partners include Collective Action for Safe Spaces, Black Youth Project 100, Sanctuary DMV and Jewish Voice for Peace, which focus on gender-based violence, anti-racism initiatives, migrant justice, and Palestinian solidarity work respectively.

However, OF DC does not only focus on state violence in Palestine. The campaign understands that it cannot win that fight without fighting the same injustices here in the United States. Our core values include an acknowledgement of the manifestations and effects of white supremacy, de-centering whiteness, and solidarity and collective liberation. OF DC makes a transparent effort to center the experiences and needs of native Black Washingtonians, the people hit hardest by state violence in D.C. Besides trying to end these deadly police exchanges, the campaign also supports affordable housing, decriminalization of sex work, abolition of police and prisons, and an end to gentrification and pushout of longtime Black residents from the city.

Jordan Brown (she/her or he/him) is an undergraduate student at Georgetown University, majoring in Justice and Peace Studies. Her studies focus on the intersections of race, dis/ability, and communication. Outside of classes, she organizes around Palestinian solidarity with Occupation Free DC. She is also a poet.