with Peter Lewis, Brian Smith and others at Draper Labs

This research employs aerosol jet printing to rapidly manufacture a multilayer PCB with COTs component integration. Specifically, this research provides a method to making a system-on-a-chip (SOC) circuit on a variety of substrates with novel integration methods. This fits well into the recent research phenomenon deemed “Internet of Things” (IoT). By advancing the manufacturing capabilities for a system that can measure and transmit data, one can integrate such circuits with minimal spatial and geometric interference to the broader device. A unique manufacturing process was developed for non-embedded components which involves the building up of the circuit around the system’s microprocessor. The transceiver circuit and its microprocessor, based off a commercially available circuit, has been successfully programmed and has shown to be working. The matching network is still being worked on, however, the goal is to have it working by the conference. To the best of the researchers’ knowledge, this research is novel in that it is the most complicated multilayer circuit that has been built using aerosol jet printing technology. Rapid ageing tests for a silver and a CNT ink were done and analyzed to determine the reliability of an aerosol jet printed circuit board. Results show adhesion is the primary mechanism of device failure as opposed to conductor degradation. 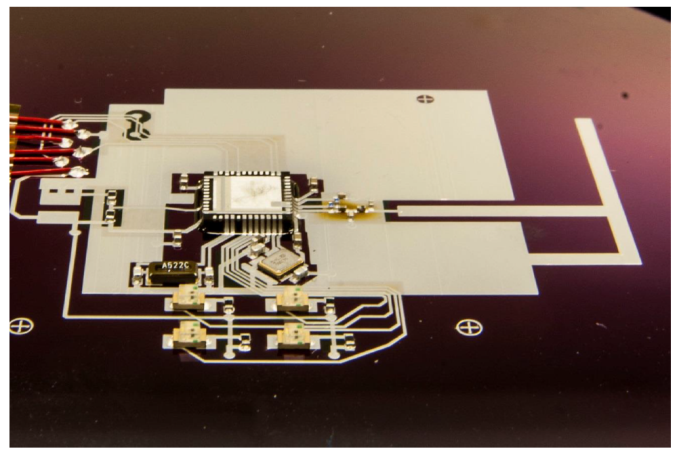 with Daniela Torres, Caprice Gray, Tony Kopa and others at Draper Labs

Low inductance micro-coaxial cables for power distribution as well as micro-coaxial cables for signal distribution have been fabricated using an in-situ fabrication and attachment strategy. These cables have been fabricated to expedite characterization of different wires for the Miniature Multi-Wire Systems (MMS) IR&D at Draper. MMSmain goal is to create a microelectronic packaging technology that will greatly reduce the time required to design and fabricate multi-chip modules and other complex electronic assemblies. This technology will be based on the use of shielded micro-wires (micro-coax) for all component interconnects to eliminate the lengthy layout and fabrication processes associated with today’s high-density packaging technologies. The first type of cable is a low inductance cable made with 1 Mil wire bonded Gold, 1 5m Parylene dielectric, and 5 5m Gold shield. The second set of cables are also low inductance cables made with 1 Mil wire bonded Gold, 100 nm Hafnium (HfO2) dielectric, and 5 5m Gold shield. The third set of cables are signal coaxial cables made of 1 Mil wire bonded Gold, 38 5m of Parylene dielectric, and 5 5m Gold shield. The characteristic impedance of these wires are measured to be 2.0-3.5O Ohm, 0.07-0.13O Ohm, and 44.6-51.5O Ohm respectively. Further characterization of these wires will also be discussed in this presentation, which will include cross-talk integrity and thermal shock reliability.

(Left) SEM image of the attachment end of a micro-coax wire where the core has been exposed for contact. (Right) SEM of a FIB cross-section of the micro-coax showing the shield, dielectric, and core.

Our group has recently been working on two concepts in robotics. The first is design and control of soft foam robots. A motor tendon actuated soft robot was built from castable polyurethane foam with a low cost and robust manufacturing method. This method can produce a robot in less than one hour with lower cost and greater durability than 3D printing. The robot produced by this method exhibits the ability to change shape, by compressing and folding, allowing it to perform complex locomotion. Hard components, such as motors and sensors, are sutured into cavities in the foam body in order to facilitate the construction process and reduce interaction with the soft body. This highly deformable robotic platform will be useful in evaluating factors that affect locomotion including material selection, structural design and control methodologies. 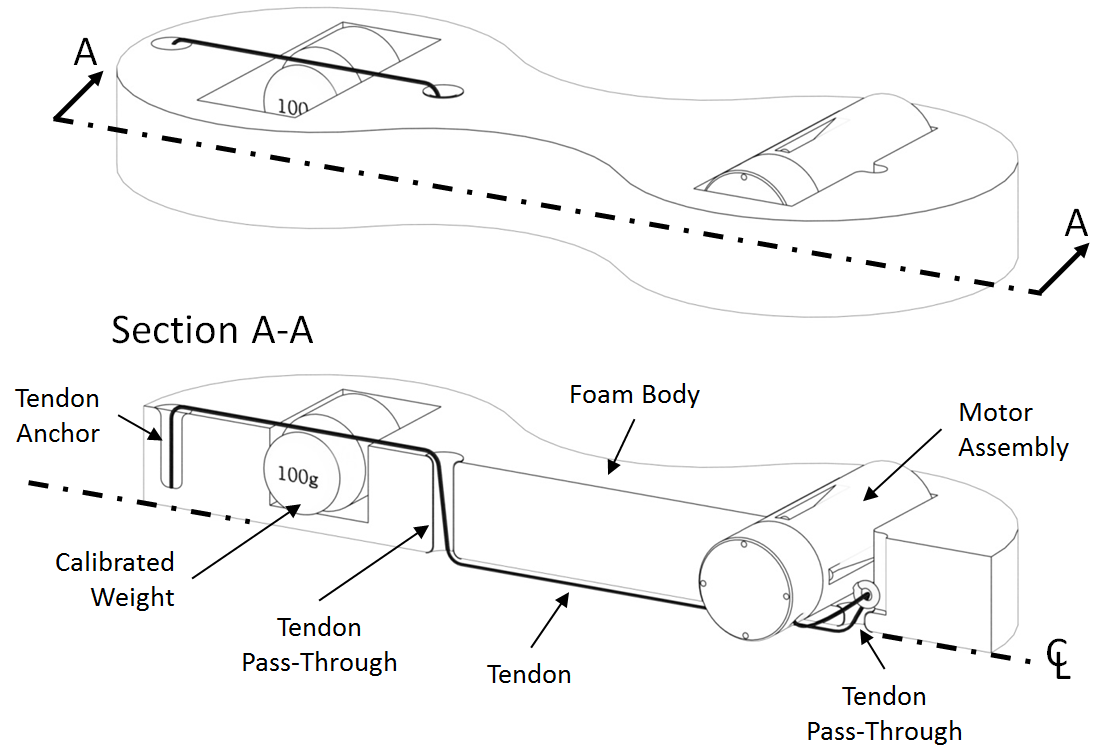 
The second topic we worked on recently is vibration communication and sensing in robots. Structure-borne vibrations in a one dimensional structure were examined as a means of communication and sensing for networks of robots. The concept was inspired by the observation that insects use structural vibrations to communicate and to detect features of their environment. A 12 x 5 x 6 cm mobile robot capable of traversing an acoustically favorable structure was developed. A technique for measuring distance between robots and communicating commands to robots using vibrations generated on a common one dimensional substrate were demonstrated 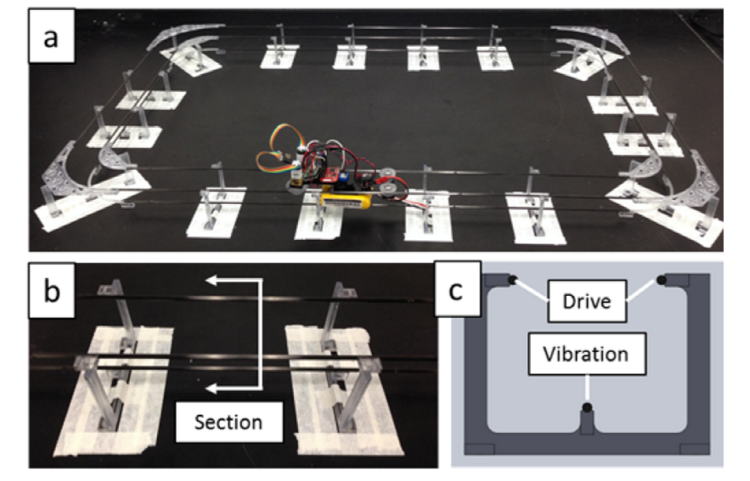 The autonomous robot pictured was developed to navigate a rail system (one-dimensional environment). The robot can communicate with an external computer and sense distance by sending structural vibrations along a “third rail”. (a) Robot navigating the track (b) a close-up of the three-rail system (c) a cross-section of the rail system with labels.