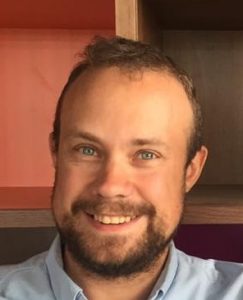 Tim is Associate Professor of Physics at Tufts University. He received his PhD in Physics in 2007 from the University of Exeter in the UK where he studied frustration phenomena in liquid crystals as part of the Electromagnetic Materials group with Professor Roy Sambles FRS. He then spent two years as a postdoctoral scholar at Case Western Reserve University in the Rosenblatt group contributing to a diverse range of projects: from the Rayleigh-Taylor instability to direct imaging of liquid crystalline order via the technique of Optical Nanotomography. He joined the faculty of Tufts University in the Department of Physics and Astronomy in Fall 2011. (see ResearchGate profile)

Zhaoyu Xie, graduate student. Zhaoyu is looking at the interaction of curvature and packing to understand arrested coalescence in Pickering emulsions.

Mat Giso, graduate student. Mat is studying the packing of particles with weak confinement, such as marbles in a curved bowl.

Sydney Holway, undergraduate summer scholar. Sydney is building an experimental and theoretical model for clogging, a process where particulate media foul a channel under flow.

Andrew Mascioli (2015-2017) wrote a senior thesis on the packings of bidispersed droplets on spheres. He discovered a beautiful connection between crystalline packings formed by equal-sized particles and the highly disordered packings formed by particles of very different sizes. This work resulted in a publication available on ArXiv.

Avram Ellner (2016) worked on understanding how surface topography can control neuronal growth in collaboration with Cristian Staii’s group at Tufts.

Dan Fortunato (2012-2013) worked on a project using ideas from graph theory and big data to look at how researchers at Tufts are collaborating by finding papers with common authorship from the PubMed database.

Sawyer Bernath (2011-2012) graduated from Tufts Physics in Summer 2012, having worked on a collaborative project between the Soft Matter Theory group and Cristian Staii’s biophysics group in developing a model for neuronal growth. Sawyer presented this work as a poster at the APS March meeting 2012.