When people think about OCD they may think about excessive germaphobia, hording, or checking.  Rarely is OCD conceptualized in terms of a dysfunction in decision making.  But that may be just what it is.  A person with hoarding symptoms cannot decide whether throwing away a shoelace or an old exam will lead to regret, they cannot decide whether they have finished editing a paper to the best of their ability, or whether they should get the large peanut butter or the small one (the large one may be 10 cents cheaper per ounce but they might not want that much peanut butter and it might go to waist, but on the other hand they might waste money and regret it but if they get the small one they might run out, and they know that a normal person would just choose and not care because it really doesn’t matter but there they are in front of the peanut butter 20 minutes later and…..maybe they just won’t get any at all).  This too is OCD.

Sachdev and Malhi developed the decision making model of OCD in 2005 in order to account for excessive indecision in patients with OCD (Sachev & Malhi, 2005).

According to Sachdev and Malhi, “In OCD and compulsive individuals, some decision making acquires an abnormal emotional valence, because of abnormal activity in the OFC.”  This leads to abnormal activation of the ACC and prevents an individual from making a quick or automated decision.  Individual ends up in a vicious cycle where anxiety about decision making increases activation in the OFC which makes it increasingly hard to make a decision.  The DLPFC is implicated in the executive function that terminates a compulsion. It is no coincidence that dysfunction of orbitofronto-striato-thalamic circuits are a cause of pathology in OCD, since these areas play a key role in decision making (Heekeren et al., 2008).

Research that supports this model:

Cavadeni Et al., studied the association between the OFC and OCD using the Bechara Gambling Task (participants must choose which deck to pick a card from with the goal of maximizing their monetary gain.  One deck is advantageous and the other is not.)  The results of this study were that OCD patients were more likely to pick from the disadvantageous deck than control patients or patients with PTSD.  This demonstrates a deficit in decision making ability in OCD patients. 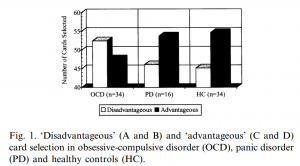 A PET scan study demonstrated increased metabolism in the right orbital frontal cortex and left anterior orbital frontal cortex in patients with OCD compared to healthy controls (Nordahl et al., 1989).  Another PET study showed that patients with OCD had increased brain metabolism in the OFC when given an obsessive stimulus compared with a neutral one (Cottraux et al., 1996).  Both these findings and many more using a variety of neuroimaging techniques implicate the OFC in OCD pathology.

So why, might you ask, does the decision making model of OCD and the neuroscience behind it matter?  Looking at OCD through the lens of abnormalities in anxiety, executive functioning, disgust, or decision has different implications for treatments, both psychopharmacological and therapeutic.  For example, studies have shown that stimulation of the DLPFC can terminate obsessive compulsive symptoms.  Neurosurgery that disrupts connections to the OFC and ACC may also be an option for patients with treatment resistant OCD (Sachdev & Malhi, 2005).