New publication: “Competition of lattice and basis for alignment of nematic liquid crystals”

Graduate student Andrew DeBenedictis has just published his paper “Competition of lattice and basis for alignment of nematic liquid crystals” in Physical Review E. Featuring other coauthors Candy Anquetil-Deck, Doug Cleaver, David Emerson, Mathew Wolak, James Adler, and Tim Atherton, the paper represents a collaboration among physicists and mathematicians here at Tufts and at Sheffield Hallam University. The paper explores how liquid crystals tend to align on an ellipse-patterned surface. Surfaces can be made to have regions that favor liquid crystals standing erect on the surface or lying flat against the surface. The particular design of a surface affects how the liquid crystals align themselves on and far away from the surface. 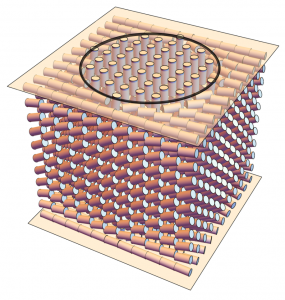 The paper considers two identical surfaces that have a square lattice of ellipse-shaped features. The alignment preference of the features differs from that of the lattice, and so a large number of different liquid crystal configurations can be achieved by adjusting feature size, aspect ratio, and orientation, as well as the distance between the two surfaces. Monte Carlo simulations of these systems done by Doug Cleaver and Candy Anquetil-Deck verify the results of this theoretical work.