SoftMatterTheory Residency at the University of New South Wales 2018

This summer, SoftMatterTheory members Tim, Zhaoyu and I visited Patrick Spicer’s lab at University of New South Wales (UNSW) in Sydney, Australia for about 10 days. This trip was made possible by the Sandler International Research Grant from Tufts.

Patrick leads the complex fluids group at UNSW. They work with fluids with unique responses, particles with custom shapes, and unique flow behavior. Our groups have been collaborating for a long time and we made a lot of progress during this residency. Zhaoyu and I spent some time in the lab to learn about their ongoing experiments, one of which kicked off a new collaboration trying to model crystal comets with Patrick’s student Haoda. Crystal Comets are formed from an oil in water emulsion. When the emulsion is cooled, the oil will crystallize. By adding surfactants, the crystals can be forced to dewet from their own liquid phase. By tuning the rate of crystallization and rate of dewetting,  high aspect ratio crystals can be formed.

The name crystal comets comes from the behavior of the liquid oil droplets; they ride around on the tip of the long crystal like a tiny comet! Zhaoyu and Patrick finalized some details of the ellipsoidal droplet coalescence project. This is an ongoing collaboration between our groups that will soon be published! Seeing their systems in person and hearing about their research goals helped clarify how we can use our simulation to inform their experiments.

We also explored the energetic city of Sydney. We tasted the delicious coffee and food, even tried the kangaroo meat (it was…not great). Starting our day with a cappuccino quickly became a ritual. Also, Australians really enjoy poached eggs. It was tough to find them prepared another way! 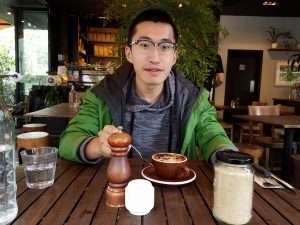 On the weekend, we explored downtown and visited the Royal Botanic Garden, local museums and zoos.  At the Australian Museum we learned about ghost nets. These are nets left behind by fishermen in the ocean. They are nearly invisible in the water and can entangle sea life and damage reefs. Several Aboriginal and Torres Strait Islander communities have begun creating sculptures from recovered ghost nets as a way to raise awareness. 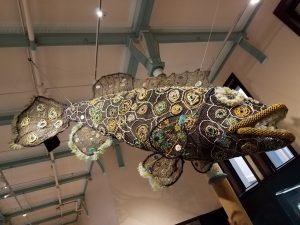 Of course, we also visited the Sydney Opera House and spent some time with koalas and kangaroos. We also took the Bondi to Coogee Coast Walk which is a roughly 3km jaunt. It gave us the chance to embrace the fascinating sea even in the winter.

My second to last day in Sydney happened to be Open Day at UNSW. This is an event open to the public and prospective students to see all the wild stuff going on at UNSW. Every club, group, and department has a booth with some fun activity or another. The Complex Fluids group made a strong showing with a pool full of Oobleck, which is a non-Newtonian shear-thickening fluid. This means if you shear it (move it) slowly, it will behave like a liquid, but if you shear it quickly it becomes solid! This lends aspiring scientists the ability to seemingly walk on water!

Walking on a complex fluid

As soon as we got there it seemed like we had to leave. Two weeks was not nearly long enough!

Be sure to follow @softmatterhacker for cool complex fluid videos!