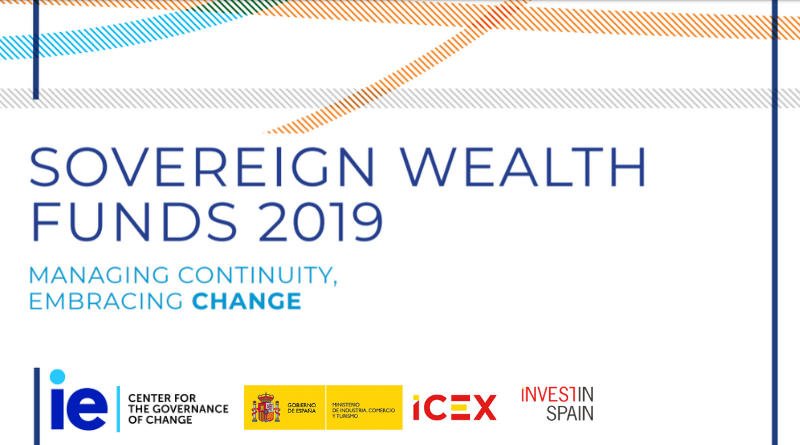 Javier Cappapé and Patrick Schena, Adjunct Assistant Professor at The Fletcher School and Co-Head of SovereigNET, wrote the first section of the report, which discusses Sovereign Wealth Fund Direct Investments in 2018-2019. The section provides an overview of the market conditions, SWF capacity, and overall availability of investible deals of 2018 and 2019.

In 2019, the growth of the world economy slowed to 2.9%, the lowest annual rate recorded since the subprime crisis. This was a year in which the elements of uncertainty that had previously threatened the stability of the cycle began to have a more serious effect on economic expansion. Among these elements, there are essentially two – both of a political nature – that stand out from the rest. The first is the trade war between the world’s leading economy, United States and its nearest contender, China, which led to a dangerous tariff escalation. The second was the confirmation of the United Kingdom’s withdrawal from the European Union, whose long denouement plunged the economy and the companies of the old continent into uncertainty. However, the negative impact of both these factors is clearly waning, and, coupled with the continued favorable financial conditions, suggests a return to growth of the world economy of 3.3% for 2020 and 3.4% for 2021.

Advanced economies saw their growth rates fall from 2.2% to 1.7% last year, a situation experienced by all the major economies with the exception of Japan. Growth in the United States fell sixty basic points, tax support from the Trump administration is now tailing off, and we are unlikely to see an upturn in GDP growth in the present election year. The Eurozone grew only 1.2% due to the negative impact of the cooling of activity in the German powerhouse, which saw modest growth of only 0.5%. Europe is also facing the tough challenge of achieving higher growth rates in a scenario characterized 1 by very little margin for stimulating the economy through the fiscal and monetary policy strategies. In any case, the developed world is undergoing its tenth consecutive year of expansion, and the risks of relapsing into a recessive cycle appear to have been allayed in view of the fact that, in spite of record low interest rates, inflation and debt remain at moderate levels.

While 2018 saw a recovery in growth in the group of emerging countries, their economic activity in 2019 once again slowed to 3.7% as a whole. China continues to astound the world with the speed of the transformation of its productive and business model, but is also an example of the difficulties of maintaining growth rates after achieving a certain level of development. Latin America’s growth in its GDP was almost imperceptible, which is a matter of concern in a region that requires more growth and an adequate distributive policy to resolve its pressing social challenges. In any case it is worth noting the divergence in the behaviour of the two major regional economies, with Brazil emerging from a long period of stagnation in recent years while Mexico is struggling to shake off its sluggish growth.

In the increasingly complex choreography of the world economy, sovereign wealth funds (SWF) play an ever more important role due to their capacity to channel large volumes of savings toward investment and hence boost economic growth. This role is analyzed in depth in the study on sovereign funds, a joint project between ICEX-Invest in Spain and IE University, whose result is the report you now hold in your hands, and which has become a leading instrument of analysis for the institutional investment industry worldwide. The aim of this project is primarily to analyze the strategies, operations and trends that feature these public investment vehicles. The present edition also takes a broad look at how these institutional investors are becoming transformed into agents for change in the key areas of our time, such as technology and sustainability. The 2019 Sovereign Wealth Funds report shows that these funds are defined by continuity and change. Continuity because they make it possible to maintain strong investment activity and are seen as a factor of stabilization in the investment cycle due to their relative immunity to the volatility of the economic situation. From January 2018 to September 2019 the total value of SWF transactions was 139 billion dollars. And change because they allow the rapid adaptation to the technology revolution thanks to increased investment in sectors such as biotechnology, software, fintech, data, mobility, e-commerce and health. SWFs are increasingly acting not only as financial investors seeking a return in the medium and long term, but also as instruments of public policy that drive the transformation of the productive sector of their economies. In this context, and in line with these objectives, SWF investments in Spain have multiplied in recent years, offering evidence of Spain’s attractiveness to these investors.

This eighth edition takes a closer look at the greater participation of SWFs in the most disruptive technologies, and also analyzes one of the most promising and novel aspects of the activity of these funds: their role as responsible investors in the Sustainable Development Goals (SDGs). The achievement of the SDGs represents a business opportunity in areas such as the agroindustrial sector, smart cities, energy and health. SWFs, as they are market-oriented government-controlled funds, might play a key role in involving private investment in the development of the 2030 Agenda. In 2018 and 2019 alone, SWFs invested in sustainability-linked assets with a total value close to 16 billion dollars. In short, as in previous years we hope you will find the present document of interest and that it will continue to serve as a useful tool for public policy decision-makers and professionals in the investment industry worldwide.