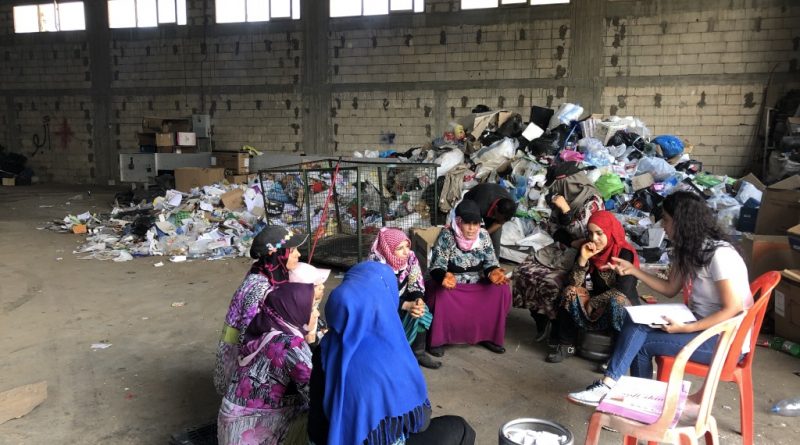 Solid Waste Management and Recycling are some of the most critical issues facing communities within Lebanon, in part due to the absence of a comprehensive governmental waste management plan. Waste Management in Lebanon has had a troubled history that came to the forefront of national discourse in 2015 after the closure of the Naameh landfill which serviced Beirut and Mount Lebanon, the country’s most densely populated regions. Waste piled up in the streets, in empty spaces around the city and in already at-capacity dump sites. This led to the You Stink protest movement in Lebanon that took place in August of 2015 in response to the lack of government response to the growing waste crisis.

Prior to the 2015 crisis, there was limited government oversight outside of the capital city and the immediate surrounding areas, with many communities relying on ad-hoc dumping with high levels of corruption. After the 2015 waste management crisis and the subsequent protests, the Lebanese government ceded central control of the Waste Manage sector to individual municipalities. The shift to a localized response to this issue means that citizens can finally have a way to express their opinions and grievances through local government participation and civil society. With increased interest and funding around the country, this sector has the capacity to pave the way for decentralization and improvements with alternative government provided services.

This summer I had the great opportunity to work for Mercy Corps for the Tripoli Project, in conjunction with the Fares Center for Eastern Mediterranean Studies at The Fletcher School of Law and Diplomacy. My role at Mercy Corps was as a gender specialist intern, conducting a gender assessment on their INTAJ III program. The INTAJ III program 2 was developed to address the underlying causes of instability in Lebanon by responding to the economic needs of target communities by working jointly with local government, civil society, and the private sector. The program specifically focuses on overstretched services and poor governance mechanisms as a driver of instability, specifically through the Solid Waste Management and Recycling Value Chain (SWM/R).

Focusing on three governorates, Mercy Corps has developed the INTAJ III program to support municipal unions in their production of waste management services on a local level. They are working across the value chains with civil society, and local municipal governments to promote employment opportunities, improve community stability and develop a sustainable and environmentally sound response to the crisis. The specific project goals are threefold: 1) combat the insufficiencies of national investment in the SWM/R sector and the inadequacy and poor quality of SWM/R services across the country; 2) address the lack of trust and frustration between citizens and local authorities around the perceived lack of transparency and corruption related to solid waste management; and, 3) address the lack of employment and income generation opportunities in areas where this is a driver of tensions and disputes.

The gender work that I undertook with the INTAJ 3 team at Mercy Corps was conducting an organizationally mandated gender assessment on the project as a whole, and more broadly examining the gendered dimensions of waste management in Lebanon. I worked with the INTAJ team in order to conduct three weeks of field research in different governorates in north and central Lebanon. During this time my Lebanese colleague  and I interviewed government officials, activists, key stakeholders and those affected by the waste crisis. We developed a gender assessment on the issues that were most pressing in their communities around the 2015 garbage crisis, which included looking at community involvement in the issue, how families make decisions regarding waste management in the home, and who makes decisions about community spaces and community projects. The value of a gender assessment for such program is to ensure that gender inequalities, like higher wages and more jobs for men, are not replicated in new systems created in the development example. For example, our gender assessment found that women are the primary decision-makers in the home on how to deal with waste and to decide whether or not they compost and recycle. One of our recommendations was to ensure that the youth volunteers who were responsible for community outreach and home visits were teaching the matriarch in the home about environmentally sensitive waste management practices.

The culmination of my internship experience with Mercy Corps was a workshop with the entire INTAJ team that I led and designed with my Lebanese and foreign program management staff. I worked with the INTAJ team to help train them on the importance of understanding gender awareness in program design, management, and implementation. At the outset, I planned it to be a basics course for those who may not have had a strong understanding of gender but was quickly alerted that that was not the case. Many of my Mercy Corps coworkers already had deep insights into the struggles, challenges, and rewards gender equitable humanitarian and development programs in Lebanon. The workshop also served as a  strategizing session on best practices, and small improvements the implementation team could make to an already well-established program.

Lebanon is a country that is struggling under a waste management crisis that does not seem to be going away any time soon. In fact, as of today, the waste crisis continues to worsen in Lebanon and community-based responses are more important than ever. Working with Mercy Corps on this prescient issue was a revitalizing reminder of the impact that even small communities can achieve against this decade-long environmental issue.

Our discussion with Moulay Hicham Alaoui @HichamAlaouiSW is happening THIS WEDNESDAY, February 26th at 5:30 PM in ASEAN Auditorium. We look forward to seeing you there!

Last Friday, we hosted Alex @nisetich of @IRIglobal for a conversation on conducting survey research in the #MENA region. Thank you Alex for sharing your insights on survey design, representative sampling, and avoiding researcher bias with the Fletcher community.

This Wednesday at the @FaresCenter