Siobhan was 2019-2020 president of the Fletcher Initiative on Religion, Law, and Diplomacy. She received a Master of Arts in Law and Diplomacy from The Fletcher School, where she concentrated in Political Systems and Theories and Russia and Eastern Europe.

From 2008-2014, she represented Ukraine as an elite-level ice dancer, ultimately competing in the 2014 Winter Olympics. After retiring from competitive skating, she attended Thomas Aquinas College, where she earned her BA in Liberal Arts. Siobhan loves working at the intersection of international affairs and religion, and she is passionate about promoting religious literacy and defending freedom of religion.

Sarah Davis was president of the Fletcher Initiative on Religion, Law, and Diplomacy. She received a Master of Arts in Law and Diplomacy from the Fletcher School of Law and Diplomacy where she studied international law, conflict resolution, and governance. Sarah is interested in the role of religious literacy in U.S. diplomacy. Prior to Fletcher, Sarah worked at the U.S. Department of State, Bureau of Overseas Buildings Operations on issues of strategic planning and organizational management. She also served as an intern with the U.S. Mission to the UN in Geneva working on humanitarian and refugee issues.

Caroline Hedberg was speaker co-chair of the Fletcher Initiative on Religion, Law, and Diplomacy. She received a Master of Arts in Law and Diplomacy from the Fletcher School where she studied Development Economics and International Education. She is particularly interested in the intersections of education, national identity formation, religion, and conflict resolution. Previously, she worked in training evaluation at the U.S. Department of State Foreign Service Institute, as well as in South Korea as a literature teacher. She is a Rappaport Fellow currently working at the Massachusetts Department of Elementary and Secondary Education.

Liya Rechtman was content co-chair of the Fletcher Initiative on Religion, Law, and Diplomacy. She is a concurrent degree candidate for a Masters of Public Policy at Harvard Kennedy School and Masters of Theological Studies concentrating in Religion, Politics, and Ethics at Harvard Divinity School. She is Wexner Fellow/Davidson Scholar, John F. Kennedy Fellow, and an Amherst College Graduate Fellow ’17-’18. Previously, she served as co-chair of the Washington Interreligious Staff Council’s Energy and Environment Working Group and as manager of the Coalition on the Environment and Jewish Life in Washington, D.C.

Madeleine Herr was logistics co-chair of the Fletcher Initiative on Religion, Law, and Diplomacy. She received a Master of Arts in Law and Diplomacy from the Fletcher School of Law and Diplomacy, studying international security and comparative democratization. Madeleine is interested in religion and violence and the role of religious literacy in post-conflict peacebuilding. Prior to Fletcher, Madeleine worked as a research assistant examining the development of vigilante groups in Mexico. Currently, she is an intern with the Defense Technology Security Administration Policy Directorate.

Clare Gooding was the 2017-2018 co-chair of the Fletcher Initiative on Religion, Law, and Diplomacy. Clare received a Master of International Business at Fletcher where she studied business development and operations with a regional focus in the Middle East and North Africa. Prior to Fletcher, Clare worked in operations for the American Refugee Committee and as a caseworker for the US Refugee Admissions Program in East Africa. During the summer between her two years at Fletcher, she worked for the Procurement department of Rawabi City in the Palestinian West Bank. Her professional interests include the cooperation of humanitarian agencies with religious institutions particularly around financial inclusion. In 2011, she was an intern at the Permanent Observer Mission of the Holy See to the United Nations in New York and has since followed closely the diplomatic work of the Holy See. After graduating from Fletcher, Clare joined Catholic Relief Services where she is now a Program Manager.

Peter Maki is an active-duty Lieutenant Commander in the U.S. Navy and received his Master of Arts in Law and Diplomacy Candidate at the Fletcher School of Law and Diplomacy in December 2018. His fields of focus were International Security Studies and International Organizations. Peter has eleven years in uniform and deployments to Iraq, Afghanistan, and throughout the Middle East. Most recently he served as an Officer-In-Charge at the Navy Expeditionary Intelligence Command and deployed as Commander, Task Group 56.9 in support of the the U.S. Navy’s Fifth Fleet in Bahrain. 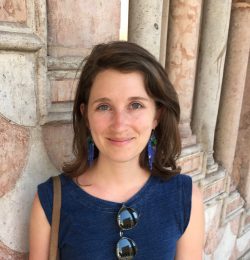 Sasha Lipton Galbraith was a Dual-Master’s Candidate at the Fletcher School of Law and Diplomacy and Harvard Divinity School. At Fletcher, she focused on program design, monitoring and evaluation in the humanitarian sector, and at Harvard Divinity School she explored the complex interplay between religions, conflicts and peacebuilding. She has worked with various NGOs and international organizations around the world supporting educational and humanitarian programming. Most recently, she interned with the Danish Refugee Council in Greece and helped to design a new accountability mechanism to improve communication in refugee camps in Greece. She speaks Italian, French and Chinese. 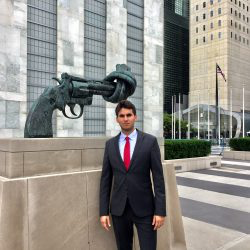 Robin El Kady was a Dual-Master’s Candidate at the Fletcher School of Law and Diplomacy and at Harvard. He focused on public international law and conflict resolution at Fletcher and studied religion, ethics, and politics at Harvard. Robin is interested in the cultural and religious manifestations in the political realm as well as in the reality-constituting role of media. He studied European media studies as an undergraduate at the University of Potsdam (Germany) and at Columbia University (NYC). He recently interned at the News and Media Division of the United Nations in NYC and at the German Council on Foreign Relations in Berlin.

Mary Soule received a Master of Art in Law and Diplomacy candidate from the Fletcher School where she focused on security studies and human security. She is interested in how religion can act as an influential soft power in international relations and the integration of religious literacy in national security. She recently interned at the U.S. Embassy to the Holy See in Rome, Italy.

Emma was a co-founder of the Fletcher Initiative on Religion, Law, and Diplomacy and organized the first conference in 2015. Emma Rosenberg is a PhD candidate in Political Science and a Doctoral Student Affiliate of the Kellogg Institute for International Studies. She is a Comparativist studying religion and politics with a focus on Central European right-wing populism and religion. She received a Master’s in Law and Diplomacy from the Fletcher School at Tufts University in 2016 and an AB in Medieval Studies and History from the University of Chicago in 2008. Emma also worked for four years as Director of Communications for a Chicago city councilman and on campaigns in the Chicagoland area. Emma can be reached at erosenbe@nd.edu

Clare was a co-founder of the Fletcher Initiative on Religion, Law, and Diplomacy and organized the first conference in 2015. Clare is a PhD student in the Department of Political Science at the University of Notre Dame and a Graduate Fellow at the Nanovic Institute for European Studies. She received her undergraduate degree in Law & French Law from Trinity College Dublin and also holds a Master’s in Law from the University of Cambridge and a Master’s in Law and Diplomacy from the Fletcher School at Tufts University. For eight years, Clare worked as a corporate lawyer with Freshfields Bruckhaus Deringer in London and Dubai. While working in Dubai, Clare also held an adjunct position at Zayed University, teaching freshman and sophomore courses. Clare can be contacted via email at cohare@nd.edu.

Dana earned her BA from Tufts University in May 2020 with majors in International Relations and Religion. Dana began interning for the Fletcher Initiative on Religion, Law, and Diplomacy in her Junior year, where she discovered her passion for exploring the role of religion in the world today and identifying how it can be used as a tool in peacebuilding and conflict resolution. In her senior year, she wrote an honors thesis entitled, “Tensions Between Gender Equality and Freedom of Religion or Belief: Britain’s Sharia Councils.” Post-grad, Dana hopes to continue advocating for intersectional women and religious minorities with a career in human rights.

Cecelia was a communications intern for the initiative. She studied art history and colonialism at Tufts, and wrote a senior honors thesis entitled “Making and Taking: Colonial Histories and Decolonial Possibilities in Photography.” Cecelia is interested in cross-cultural communications, education and documentary photography.

Please join us on March 4th for our second panel in the Liberation Theology and Peacebuilding series!
Register at the link below:
https://www.eventbrite.com/e/liberation-theology-peacebuilding-tickets-140619200815?fbclid=IwAR2uzJh789PJIw15ZGaz0kVgiyQU38QqNz5LDXclwauoZwyRg6e2EASQAiY

Please join us tonight at 5:30 to kick off our Spring Panel Series!
Link to register: https://www.eventbrite.com/e/a-power-like-no-other-religion-and-peacebuilding-tickets-140454203303?fbclid=IwAR082tO2njYvesHIg1Ut9S37oPxwfJOKnT9z4OcrPKo47u7QzAY8fOuXUms

Mark your calendars! The annual Fletcher conference on Religion, Law and Diplomacy will be on March 27th! Check back soon for more updates.