Attendance is by registration only on Eventbrite

Please join the Fletcher Eurasia Club and the Fletcher Initiative on Religion, Law, and Diplomacy for a lunch conversation with Ambassador James Warlick about the political role of the Eastern Orthodox Church in Eurasia, regional conflicts, and U.S. foreign policy in the Balkans. 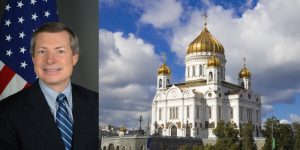 James Warlick is Managing Director of Egorov, Puginsky, Afanasiev, and Partners office in Washington, D.C. responsible for U.S. and international clients, development of strategic client relationships, legislation, and public policy. Previously Warlick was a career diplomat in the U.S. Department of State for more than thirty years. He also served concurrently as Associate Professor of Law at Arizona State University in 2016. In his diplomatic career, Warlick was appointed as the U.S. co-chair of the OSCE Minsk Group in 2013 to work on a peaceful settlement of the Nagorno-Karabakh conflict. Warlick served as U.S. Ambassador to Bulgaria (2009-2012) and as Deputy Special Representative for Afghanistan and Pakistan in the office of the Secretary of State (2012-2013), where he had responsibility for negotiating a Bilateral Security Agreement with Afghanistan. Warlick holds a B.A. from Stanford University (1977), a Master of Letters in Politics from Wadham College, Oxford (1979), and a Master of Arts in Law and Diplomacy (1980) from The Fletcher School of Law and Diplomacy at Tufts University.