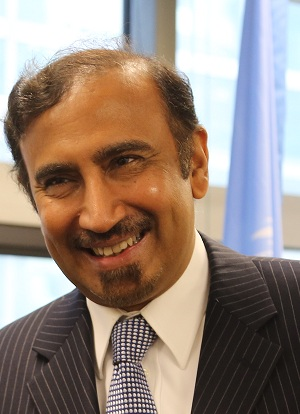 Dr. Jehangir Khan is the Director of the United Nations Office of Counter-Terrorism.

He has served in different capacities at the UN for over 30 years, both as a UN delegate (for 9 years) and as a UN Secretariat official (for over 21 years). Previously he served as Acting Director and Deputy Director of DPA’s Middle East and West Asia Division (MEWAD) and, before that, of the Asia and the Pacific Division (APD). Dr. Jehangir Khan also served as Head of DPA’s Iraq Team and Chairman of the UN Iraq Operations Group (IOG) for five years, starting with the 2003 war, and has supported the work of six successive SRSGs and the United Nations Assistance Mission (UNAMI) in Iraq. Prior to this he served as Deputy Head of Policy Planning in the Department of Political Affairs. Before joining the UN Secretariat in 1992, Dr. Khan served as Chef de Cabinet to the President of the UN General Assembly and previous to that he worked as Political Advisor to the Ambassador of Saudi Arabia to the United Nations. Dr. Khan is a national of Pakistan. He is a graduate of London University and holds a Doctorate in International Law from the Fletcher School of Diplomacy/Harvard Law School.