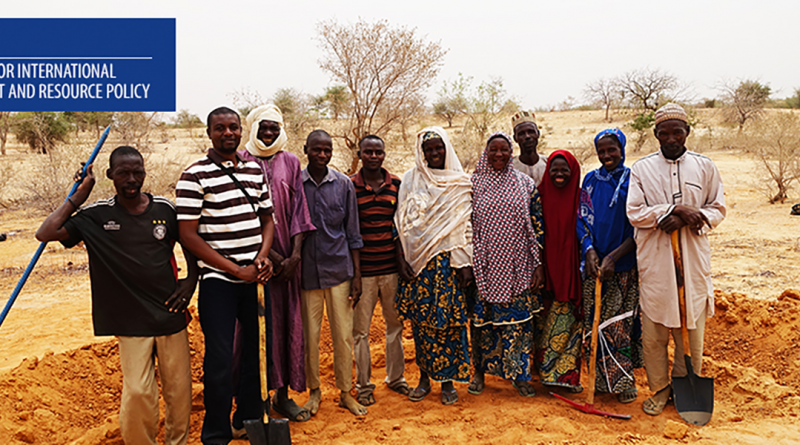 Rainfed agriculture in the Sahelian region of sub-Saharan Africa is plagued by low and erratic rainfall and strong winds, contributing to soil erosion and degradation.  It is estimated that approximately 50 percent of farmland in West Africa suffers from nutrient depletion and poor soil fertility (Scherr 1999).  Small-scale farmers in West Africa have traditionally dealt with poor rains and degraded soils by shifting into extensive agriculture.  Yet high population density has resulted in shorter fallow periods and reduced the availability of arable land, thereby making these strategies unsustainable in the longer-term (Warren, Batterbury and Osbahr 2001).
Sustained yield improvements in the Sahel therefore require intensive agricultural practices, namely, techniques that both increase the level and duration of water stored within the soil (via rainwater harvesting, or RWH) and replete soil nutrients.[1]  While rainwater can be harvested via in-situ rainwater conservation (often known as conservation agriculture), this technique is poorly suited to the semi-arid areas of Africa, where soil cover materials (e.g., mulch) compete with livestock fodder.  In such contexts, micro-catchments — small structures constructed within a field to collect soil runoff and increase the nutrient content of the soil – are the most appropriate RWH technology. The most common micro-catchments used in the Sahelian region of West Africa are zaï/tassa (soil pits), demi-lunes (half-moons) and banquettes, some of which are indigenous to West Africa. Variations of these micro-catchment techniques have also been adapted in the semi-arid zones outside of West Africa, including Ethiopia, Kenya, Tanzania and Uganda.
Decades of research station and on-farm trials in the Sahel suggest that zaï and demi-lunes can significantly reduce soil erosion and degradation as well as the risk of crop failure (Warren et al 2001, Vohland and Barry 2009).  In combination with manure or inorganic fertilizers, demi-lunes can increase millet yields from 1 MT per hectare (in control plots) to over 3.8 MT per hectare (Concern Worldwide 2011). This suggests a potential profit of $USD 30 per hectare, which is comparable with the profitability of fertilizers alone. Yet adoption of RWH techniques remains low, especially in Niger:  it is estimated that fewer than 10 percent of small-scale farmers use micro-catchments on any part of their land (WOCAT 2009).
Why is the adoption of these technologies so low?  There are numerous potential reasons, such as high construction and maintenance costs (estimated at USD $90 on one hectare), limited access to technical information for implementing these techniques or the fact that yield improvements may not be observed until the second year.  Yet a simpler explanation may be that micro-catchment techniques are not profitable for small-scale farmers, either in the short- or medium-term.
Over the past decade, numerous non-governmental organizations (NGOs) have promoted the adoption of RWH techniques by providing technical training and cash-for-work (CFW) programs throughout the Sahel.  While these programs have been successful in increasing the prevalence of RWH technique adoption in particular villages, their ability to identify the underlying barriers related to RWH adoption – and, more importantly, the profitability of these techniques for small-scale farmers – has been constrained by small sample sizes, selection bias and measurement error.  Furthermore, there are few, if any, studies assessing the impact of these techniques alone on yields or profits; their impact has usually been evaluated in combination with the provision of fertilizer, an additional cost for small-scale farmers.
This research seeks to better understand the barriers to RWH adoption, as well as measure the impact of their adoption on farmers’ well-being, namely soil quality, yields, revenues and costs.  Using a randomized control trial in Niger, and in partnership with the Ministry of Environment and Sahel Group, farmers were offered one of three interventions: 1) training: basic training for RWH techniques, including the necessary equipment, conducted by the Ministry; 2) UCT: training on RWH techniques and an unconditional cash transfer (cash advance) worth $40, approximately 50% of the labor costs labor and equipment costs associated with constructing these structures on one hectare of land; and 3) CCT: training on RWH techniques and a conditional cash transfer, whereby farmers receive a cash payment for every demi-lune of acceptable quality, similar to the per-RWH value of the unconditional transfer. In addition, a subset of farmers in these villages received individual training booklets (see image).
The sample size for this pilot as 30 villages in the Dosso region of Niger, targeting villages that are the most affected by soil degradation.  Within each village, 25 farmers were selected village, for a total of 750 farmers. At the initial meetings, farmers were not informed of the potential future cash payments, in order to encourage participation of those interested in the RWH technique technology.  Approximately ¼ of the beneficiaries are women.

Initial pilot results show that interest in these techniques was high:  85 percent of households attended the trainings, regardless of the intervention group.  Yet there was a difference in actual construction of demi-lunes:  85% of households in the training and UCT villages constructed any RWH techniques on their plots, but households in CCT villages were 13 percentage points less likely to construct RWH techniques (Figure 2).  This suggests that training (alone) can be a cost-effective way to get farmers to try the technology, but that the conditional cash transfer might actually discourage investment.
Yet the unconditional cash transfer was helpful in encouraging farmers to construct more demi-lunes on their land:  While households in the training villages constructed about 30 demi-lunes per hectare, those in the UCT group constructed about 47 demi-lunes per hectare.  And those in the CCT villages constructed fewer than those in the training or UCT group (Figure 3).  While all of these were well below the suggested technical norms of 250-300 demi-lunes per hectare, this suggests that cash transfers were necessary to overcome farmers’ credit constraints associated with hiring labor.  However, again, the conditional aspect of the transfer in the CCT group seemed to discourage such investment.
While these results are promising from an economic and policy perspective – especially considering that most NGOs and governments use conditional payments for environmental technologies – more research is needed. We are currently pursuing funding to conduct a larger randomized control trial in more villages, and also varying the amount of the cash transfer provided.

[1] A RWH system usually consists of a catchment or collection area which produces runoff, a conveyance system through which the runoff is directed and a storage system where water is accumulated.

Don't forget to register for today's CIERP Research Seminar: Climate Legislation- Global Trends and Design Principles with @tarungk91 and Meera Gopal. Food will be provided! Join us from 12-1:30 pm and RSVP here: https://t.co/oDUfnwUnnJ

Join us for the first CIERP Research Seminar of the year: next Tuesday from 12:00-1:30 pm in the Crowe Room. Climate Legislation Global Trends & Design Principles with Research Fellow @tarungk91 and Fletcher LLM graduate @mee_gopal RSVP: https://t.co/oDUfnwUnnJ