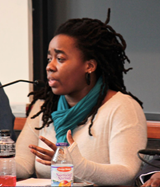 This workshop took place on April 26th, 2018. It was led by Hope Freeman the Director of the Tufts LGBT Center. A Boston native, Hope is a graduate of Smith College where she obtained a degree in Africana Studies and holds a Masters in Non-Profit Management from Simmons College School of Management. For nearly a decade, Hope has committed her career to empowering and advocating on behalf of LGBTQ adults and youth, particularly LGBTQ youth of color. From HIV counseling and testing, helping youth develop leadership skills, to providing LGBTQ cultural competency training and education to youth serving agencies and community organizations; Hope has an extensive array of experience ensuring youth are not only able to access quality and necessary care, but are equipped with the tools needed to thrive, strive, and succeed. Hope is currently the Director of the Tufts LGBT Center.

Despite important shifts in both public policy and attitudes in many countries, most of our societies are still organized around the belief that there are two discrete and immutable gender identities that are mutually and exclusively attracted to each other. These false assumptions of cisgenderism (i.e., where individuals’ experiences of their own gender are in line with the sex they were assigned at birth) and heterosexuality are dangerous, especially when coupled with and amplified by sexism, ableism, classism, misogyny, and racism.

Many people who are part of the LGBTQI community face hostile and unsafe professional or academic environments because of widespread deep discomfort with any threat, real or otherwise, to patriarchy, heteronormativity, and cisgenderism. In many countries, firing someone based on their sexual orientation and/or gender identity is still legal. In the West, there is a LGBTQI wage gap, with workers identifying as lesbian, gay, bisexual, transgender, queer, and/or intersex earn less than their cisgender and/or heterosexual counterparts. Breaking down assumptions based on sexual orientation and gender identity is crucial to dismantling patriarchy and creating a safe, inclusive, and diverse professional and academic environment.

#ChallengingConceptions is a ground-breaking collection exploring the life cycles of children born of wartime rape across time and space.