APAP hepatotoxicity does not originate from the molecule itself but is rather attributed to one of its metabolites, N-acetyl-p-benzoquinone imine (NAPQI). This metabolic intermediate forms upon oxidation of APAP via CYP2E1 enzyme. Normally, NAPQI is quickly conjugated with glutathione (GSH) via glutathione transferase to produce the non-toxic compound APAP-GSH. However, a rapid influx of NAPQI depletes GSH stores, causing NAPQI to build up in liver cells (15). For this reason, patients who overdose on APAP are treated with N-Acetyl Cysteine (NAC), which stimulates GSH production to protect against liver damage (16). 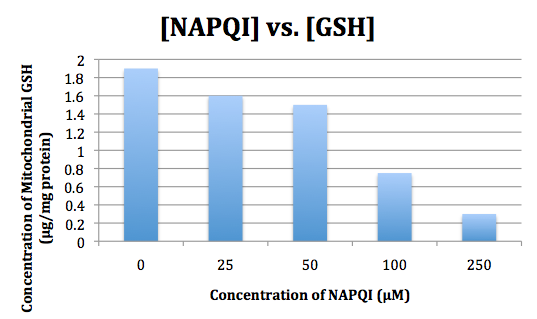 To see a full scheme of the APAP metabolism and to learn about its interaction with ethanol, click here.