A study conducted by Nabeeth Mourad and Charles L. Woronick reported the discovery of the first crystal structure of alcohol dehydrogenase from human liver through a purification procedure that used fractionation with ammonium sulfate, treatment with ethanol-chloroform, chromatography on carboxymethylcellulose and on diethylaminoethylcellulose, and crystallization from aqueous ethanol. Utilizing ultracentrifugation and polyacrylamide gel disc electrophoresis, the crystallized protein was determined to be homogenous.Using the results from horse liver ADH in which the rate constant for alcohol oxidation at 37ºC is 1.4 times as great as the rate constant at 23ºC, they calculated the rate for human liver ADH at 37ºC to be 55% as great as the actual rate at which ethanol is oxidized. This is evidence of the fact that not all the ethanol in the human body is oxidized by liver ADH, as there are ADH isoforms in the kidney and erythrocytes, and some of the ethanol isn’t oxidized at all but directly excreted (22).

A study carried out by Wang et al. used Gaussian 03, a computational program, to complete density-functional calculations for the three proposed mechanisms for the oxidation of ethanol by CYP2E1. The active site was modeled using an oxoferryl species Fe4+O2-(C20N4H12)–(SH)– with ethanol used as the substrate. The method was chosen to be UB3LYP functional, which is spin-unrestricted, and Wang et al. coupled it with LACVP** in which all geometries were optimized at the UB3LYP/LACVP** level. They determined that transition states contained one imaginary frequency mode through vibrational analysis. Chlorobenzene was used as the solvent in single-point energy and self-consistent reaction field (SCRF) calculations in order to determine the effects of the weak polarization environment of the heme pocket using the polarizable continuum model solvation method. SCRF calculations were also carried out in a polar environment to model the polarity effects of high concentrations of ethanol in the heme pocket. The results of these calculations led the researchers to determine that the active site of CYP2E1 is composed of almost degenerate low-spin doublet and high-spin quartet states. After determining this spin-state duality in the active site, they studied the three mechanisms on both spin-state surfaces, leading them to the conclusion that ethanol oxidation occurs through the reverse dual-hydrogen abstraction (R-DHA) mechanism in polar environments while in nonpolar environments the R-DHA mechanism competes with the gem-diol mechanism to oxidize ethanol (8). 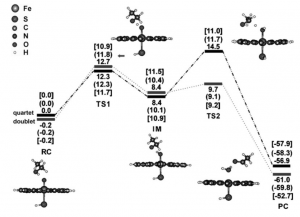 Figure 22: The UB3LYP/LACVP** energy profile determined by SCRF calculations for ethanol oxidation in the active site of CYP2E1 through the R-DHA mechanism. The energies shown depict the gas phase (no parentheses), the weak-polar medium (parentheses), and the polar medium (brackets). RC refers to the reactants complex, IM to the intermediate complex, PC to the acetaldehyde complex, and TS to the transition states (8).

To learn more about the results of this method, click here