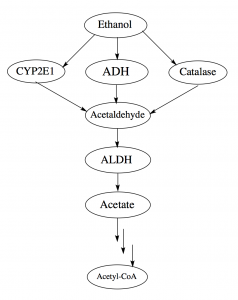 When alcohol, in the form of ethanol, is consumed, the majority enters the systemic circulation where it can then be metabolized in the liver via the enzyme alcohol dehydrogenase (ADH). ADH, as well as cytochrome P450 (CYP2E1) and catalase to lesser extents, are responsible for the oxidation of ethanol, which removes around 90% of the ethanol absorbed in the body. ADH oxidizes ethanol to acetaldehyde, while reducing NAD+ to NADH, which is then oxidized to acetate by the enzyme aldehyde dehydrogenase (ALDH), reducing another equivalent of NAD+ to NADH. The acetate produced via ALDH in the liver is then transported to peripheral tissues where it is converted to Acetyl-CoA. Therefore, the carbon atoms entering the body in ethanol are ultimately incorporated into the same product as the breakdown pathways of proteins, carbohydrates, and fats (3). 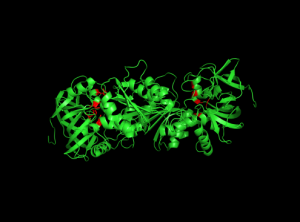 Figure 3: Alcohol dehydrogenase (ADH-1) is depicted above  (4). Located in the cytosol of the liver, ADH is a dimeric enzyme with a zinc center in both 40 kDa subunits, shown in red. There are 6 classes of ADH, but class 1 ADH forms (containing the genes ADH1, ADH2, and ADH3) are those that catalyze the oxidation of alcohol.