Figure 13: The mechanism of aldehyde dehydrogenase via a tetrahedral thiohemiacetal intermediate. The active residues, Cys302 and Glu268, catalyze the reaction (11).

There are 19 isozymes of aldehyde dehydrogenase, with ALDH2 specific to acetaldehyde oxidation. The catalytic reaction occurs in five steps: first Cys-302 is activated by a water-mediated proton abstraction by Glu-268, then the thiolate group of Cys-302 attacks the electrophilic aldehyde which forms a tetrahedral thiohemiacetal intermediate and a hydride transfer to the NAD+ ring, resulting in a thioester intermediate which is hydrolyzed, followed by the dissociation of NADH and regeneration of the enzyme due to NAD+ binding (11). 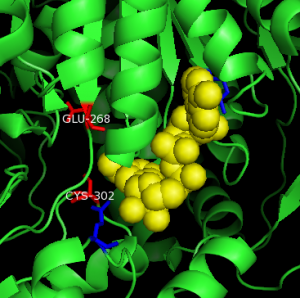 Figure 14: The active site of aldehyde dehydrogenase. The residues in blue (Glu399 and Lys192) help coordinate the NAD into the active site, while the red residues catalyze the reaction with acetaldehyde (pdb file: 1O01).