A tertiary pathway for the oxidation of ethanol is carried out by catalase, a peroxisomal enzyme that also catalyzes the removal of hydrogen peroxide (H2O2). Although catalase has a much smaller role in alcohol oxidation than ADH or CYP2E1, it is important in cerebral function as inhibiting catalase has been found to decrease the rate of oxidation of ethanol to acetaldehyde by the brain (3). 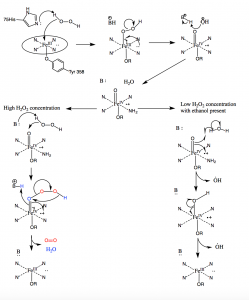 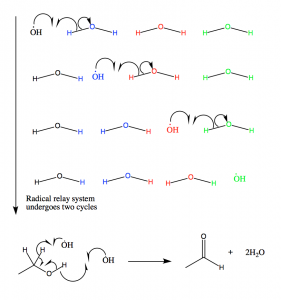 Figure 11: The hydroxyl radicals produced in the radical catalase mechanism are channeled out of the active site via this mechanism. The radicals then react with ethanol, which is held in proximity to the active site. If ethanol is not present, NADPH is oxidized.

The active site of catalase is a haem moiety with His-75  playing a major role in the catalytic activity; it uses a charge relay (residues Tyr358, Arg354, His218 and Asp348) in order to carry out reactions without disrupting peroxide binding. When the oxyferryl group is formed, the charge relay system is initiated through the continuous movement of the coordination bond electrons from one bond to the next. The resonance attributed to the movement of the coordination bond electrons allows an electron cloud to form around the iron center in which electrons can be donated to the catalytic reactions (10). 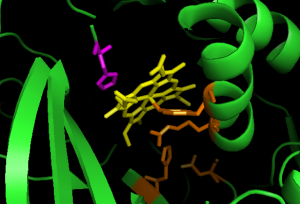 Figure 12: The active site of catalase contains a heme (yellow) with catalytic His75 on the distal side (purple), and several residues, Tyr358, Arg354, His218 and Asp348, contributing to a charge relay system on the proximal side, shown in orange (pdb file: 1qqw).