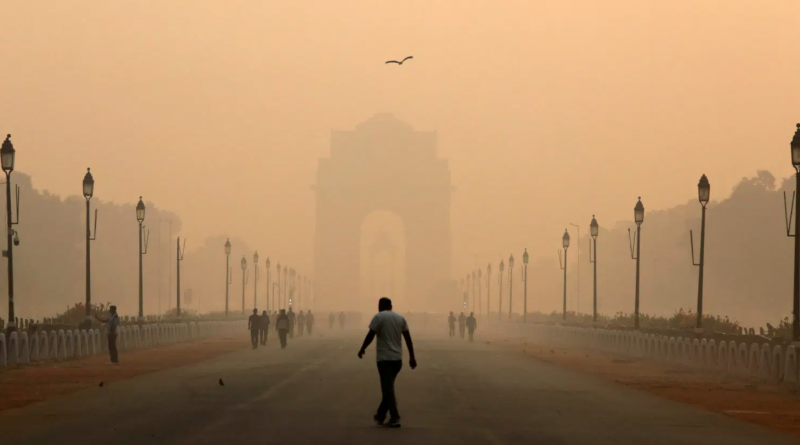 As part of the new course “Environmental Humanities and Global Health” introduced by Professor Kimberly Theidon in the Spring 2021 semester, Fletcher students were encouraged to engage the emergent trans-disciplinary field of the environmental humanities in analyzing and developing responses to contemporary environmental dilemmas that require the collaborative work of diverse scientists, medical practitioners, engineers, artists, lawyers, and other across a variety of fields.

For the Class Finale project, students chose an environmental issue affecting them, their loved ones, and their communities, and wrote a series of three papers directed to particular audiences in varying tone, style, medium, and genre.

In this op-ed, MALD ’22 Raunaq Chandrashekar discusses the intersections between public health and air pollution, and the need for a holistic approach in discerning a remedy.

On November 4, 2020, Delhi’s 21 million residents woke up to its most polluted day that year, with the average Air Quality Index reading of over 452 across its wide expanse of over 570 sq. miles. Unsurprisingly, this annual high was something of a blip in the radar, given the kinds of records Delhi is used to setting on this front. Like many parts of the world, lockdowns caused by the COVID-19 pandemic led to a relative reduction in pollution as most forms of human activity (that generate pollution) were halted. Delhi’s people breathed easy for a few months, until they were greeted with the familiar rancid winter smog. What’s particularly worrying is that air pollution is back and with a bang; while 2020 was Delhi’s least polluted year in recent times, 2021 is already looking worse than 2018’s air quality.

Why is this still happening? More importantly, why is it getting worse? Why have our systems continually and consistently failed the residents of Delhi? Well, answers to most questions worth asking cannot be summed up in one sentence and this issue cannot be attributed to a single cause, but to several interlinked causes. The issue of air pollution overlaps with rapid urbanization, political bickering, capitalism and industry, and good old fashion political will (or lack thereof).

Perhaps the most widely attributed (wrongly so) cause of Delhi’s air pollution is the practice of stubble burning by farmers in North India. Delhi, and several parts of North India, see a considerable dip in air quality immediately prior to the sowing seasons in the spring and fall. The smog at the start of winter is particularly problematic, since it combines with the low temperatures to create a blinding smog that has even halted airline operations at times

Residents of Delhi are quick to pin the blame on farmers, without fully understanding the reasons for this or the ineffective government policies that fail to curb this menace. It’s vital to remember that smoke doesn’t discriminate and farmers themselves are subject to the menace of toxic air every year.

While most parts of the world, and indeed even India, have moved past the old practice of stubble burning, the practice persists in North India. After harvesting rice in September, most farmers have precious few days before they need to start sowing wheat for the winter season. Most farmers cannot afford the time or money to rid their fields of the residual stubble, without resorting to burning it.

The Punjab state government has long adopted punitive measures to attempt to stymie this practice, but with little success. The law is not enforced well, and farmers would sooner avoid enforcement, pay fines, or bribe officials than hire the expensive “Happy Seeder” machine (and pay for the diesel it consumes). Not to mention the fact that there aren’t enough of these machines for the state to begin with. Meanwhile, other parts of the country incentivize the removal of stubble and its use for various things, from cattle feed, to selling it to bio-thermal plants, and more. Yet, these market linkages do not exist in Punjab.

The most recent invention has been the creation of capsules by microbiologists at Indian Agricultural Resources Institute, which contain various fungi that could allow for a quicker, organic composting remedy. While the Delhi Government has touted this as a solution to end the issue, there is skepticism about wide-scale efficacy and adoption. At the end of the day, nothing beats a multifarious approach. A critical factor that has separated these regions from others where stubble burning has ended is the creation of markets for crop stubble and finding alternate uses for it. Not only does create a more sustainable cycle, but provides alternative incomes for farmers.

North India is also home to one of the oldest mountain ranges in the world, the Aravallis. For long, this range has provided a healthy supply of oxygen and something of a barricade to winds that bring smoke with it, fondly referred to as the “green lungs of the capital” by environmentalists and ecologists.

Researchers estimate that over 40% of the forest cover around the Aravallis have been destroyed in the name of infrastructure activity. This is perhaps one of the more alarming trends of urbanization. While other issues actively contribute to greenhouse gas and particulate matter emissions, for long, the industrialization of Delhi and its adjoining regions would be offset by the plush forests that enveloped the city. With this protective cover steadily deteriorating by human action, it’s no surprise that Delhi doesn’t have enough forests to try and offset the pollution it’s generating on a regular basis.

Unfortunately, the battle on this front is entirely reactionary and reliant on protracted litigations and interventions by the courts. As recently as February 2021, the National Green Tribunal had to stop the allotment of land in the Aravallis for a petrol pump, as it violated India’s environmental policy norms. But the fact that this issue required litigation to be halted is worrying enough. The union and state policies require more teeth and stricter enforcement from the get-go, with the bar being set high for necessary infrastructure activity. This needs to be coupled with obligations to carry out robust environmental impact reports and plans to reforest in adjoining areas to maintain a certain equilibrium of forest cover.

This also requires a reorientation in how we perceive and value forest cover and wildlife. In early February 2021, a Committee was appointed to assess the monetary value of trees in relation to a proposed infrastructure development activity in the state of West Bengal. The Committee pegged the value of a tree as its age multiplied by INR 74.5k (approx. USD 1013), arguing that instead of focussing on the value of the timber a tree provides, a more holistic valuation that looks at its positive environmental impact must be accounted for. The Committee further noted that the monetary value of a project is sometimes far less than the economic and environmental worth of the felled trees.

Industrial activity around Delhi in adjoining states has such a drastic impact on air quality, that the 2020 lockdown saw an average reduction in PM2.5 and NOx concentrations by roughly 43% and 61%, respectively. The magnitude of this difference is truly astounding, matched only by the stunning lack of attention this issue receives, when compared to other drivers of air pollution. As a rapidly developing economy, it’s almost understood that the creation and operation of industries is both an economic and political good for citizens. With industrial activity encouraged as a vital prong of development, it’s no surprise that industries are allowed to work unchecked. Coal-burning thermal plants in and around Delhi add to this toll of toxic air every year as well. The governments of Delhi, India, and adjoining state governments rely on a “switch on/switch off” approach, where these plants and factories are ordered shut, whenever pollution exceeds certain levels. This is problematic for it even halts industrial activity and affects income for laborers. This approach needs to be substituted with a more robust set of environmental standards for regular industrial operation, such as the requirement of better filtration mechanisms, obligations to reforest, and harsher penalties and enforcement of these regulations. The same must be done for infrastructure activities, particularly with building demolition activities and brick kilns.

Vehicular emissions are another major issue in Delhi. The Delhi government routinely exercises an “Odd-Even” car policy, according to which even number plate cars are permitted on the roads on one day, and odd number plate cars on another. The aim is to limit vehicular traffic every day. The problem though is that this policy in isolation does incredibly little. As some critics have pointed out, Delhi saw an increase in the number of cars by 73% between 2010 and 2018, while the number of public buses fell by 17%. An issue that cannot be circumvented is getting resident’s to adopt regular use of public transport, as opposed to personal vehicles.

Though clean air may seem like a non-partisan issue, unfortunately the discourse around cleaning it up and enacting effective policies has been mired in political bickering and passing the buck. This is particularly true of the Delhi and Union governments, led by the Aam Aadmi Party and the Bharatiya Janata Party, respectively. The “Odd-Even” policy in particular has received criticism from the Union government and right-wing media commentators for being ineffective. Similar accusations from the Delhi government against the Punjab government. Delhi claims that its neighboring government is not doing enough to address the issue of stubble burning and sticking to outdated punitive measures that are not effectively enforced. In the midst of this regular tussle and blame game, Delhi has witnessed a staggering increase in air pollution every year, with no signs of fading away. We need these governments to work in synergy to devise a multi-prong plan that involves long-term policies and enforcement mechanisms that address these various issues. Policies so far are reactive and amount to putting band aids on bullet wounds. Experts from various disciplines have weighed in on a variety of long-term solutions, yet there seems to be a lacking political capital to execute this in a coordinated fashion. Political resolve and action are arguably dwindling, much like the clean air that Delhi once enjoyed, and without a push to clean up our approach, we cannot expect to clean up our air anytime

EVENT: Want to learn more about the Gender and Intersectional Analysis Program at @FletcherSchool, @TuftsUniversity? Join us at 5:30pm EST on Tuesday, 28th September to connect with our faculty, students and staff. #FemSecSt #FeministIR #FletcherGAIA