Visit the CGIA Website for more information on the 2021 Conference.

The Fletcher School of Law and Diplomacy at Tufts University hosted the Sixth Annual Conference on Gender and International Affairs throughout the Fall 2020 and Spring 2021 semesters. Due to the COVID-19 pandemic, the Conference was divided into a speaker series, where each month had a different panel of speakers to discuss topics related to transforming bodies of power. The theme built upon the previous five conferences and questioned the nature of global and local power structures and their influence on our lives. The conference aimed to respond to the present need to be cognizant of, and ultimately reconceptualize, bodies of power, encouraging participants to utilize gender as an analytical tool for expanding our collective consciousness, while also analyzing the effects of the pandemic on progress in gender issues.

The Conference featured the following panels:

The Fifth Annual Fletcher Conference on Gender and International Affairs: [En]gendering Change: A Rally for Action 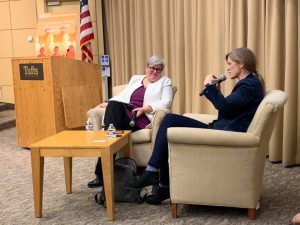 The Fletcher School of Law and Diplomacy at Tufts University hosted the Fifth Annual Conference on Gender and International Affairs on November 15 and 16, 2019, featuring keynote speaker, Samantha Power. The goal of this theme was to expand upon the previous four conferences by focusing on how gender can be used pragmatically within the field of international affairs. The Conference wanted to create an environment where students and the general public alike would have the opportunity to draw from the dialogues throughout the events in order to take action and foster progressive change themselves.

The Conference featured the following panels:

The Fletcher School of Law and Diplomacy at Tufts University hosted the Fourth Annual Conference on Gender and International Affairs on November 16 and 17, 2018. Over the past three years, the conference has brought hundreds of individuals across the Fletcher, Tufts, and greater Boston communities together to cultivate their knowledge of gender analysis and the application of a gendered lens to the fields of international affairs, development, business, and public policy. Panel topics in the past have included feminist foreign policy, queering international relations, and the politics of data collection, among many others. 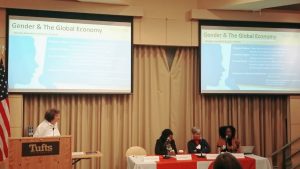 This year’s theme, Gender, Justice & Politics: Movement from the Margins, expands upon the previous three conferences by broadening the application of a gendered lens from the individual to states and institutions and by exploring the role of gender in global issues. The goal of this year’s Conference on Gender and International Affairs is to facilitate conversations about gender and power, with a particular focus on the ways in which communities are marginalized and how they challenge the status quo. The Conference aims to deepen participants’ understanding of the hierarchical nature of constituent groups’ access to opportunities and influence in global politics. Through open conversation, the Conference also endeavors to emphasize the necessity of an intersectional lens in understanding the gendered dimensions of justice and politics.

This year’s Conference is particularly focused on introducing a gender lens to professional fields and sectors from which it has been traditionally absent or ignored. The Conference featured the following five panels:

The panels were be supplemented with an in-depth conversation on gender in the midterm elections, and workshops on op-ed writing and gender-sensitive research. Ultimately, we the conference aimed for participants  to leave the conference with a greater, more nuanced understanding of intersectional gender analysis and as advocates for gender sensitivity within their fields of work.

The Third Annual Fletcher Conference on Gender and International Affairs: Money, Power, and Influence: The Gendered Dimensions of Geopolitics

The Fletcher School of Law and Diplomacy at Tufts University hosted its third annual Conference on Gender and International Affairs on November 17 and 18, 2017. The theme was Money, Power, and Influence: The Gendered Dimensions of Geopolitics. It expanded on the foundation laid by the previous two conferences, which explored gender analysis and gender-sensitive leadership. The panel topics in the past included feminist foreign policy, urban displacement, and decision-making in security. 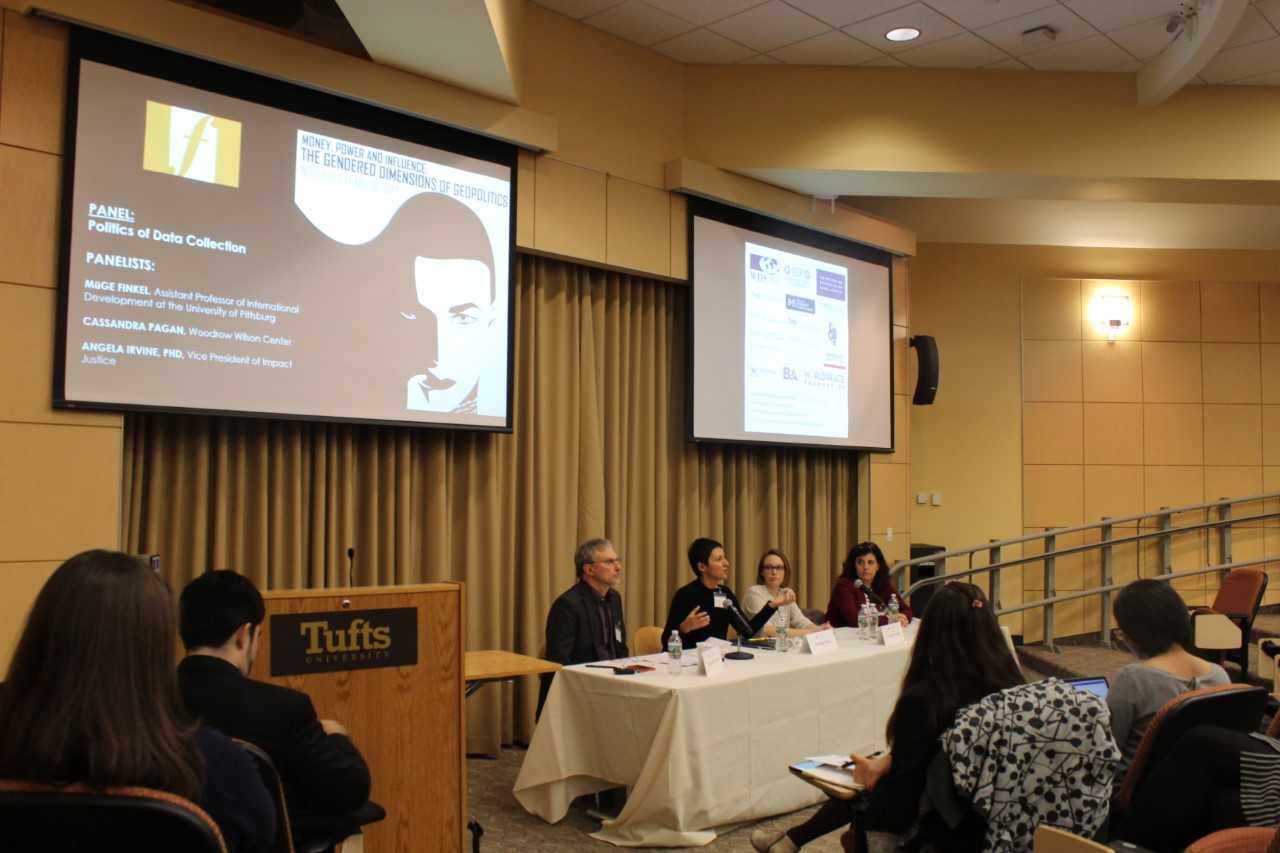 The goal of the Conference is to facilitate conversations surrounding gender and power, their impact at the individual, community, institutional, state, and multilateral levels, and what this means for policy and programming in practice. Through these conversations, the conference aims to deepen participants’ understandings of the relevance of gender in relation to status, access, and influence in all areas of international relations. The Conference seeks to reiterate the importance of applying an intersectional lens towards issues in international affairs since gender and power intersect and are enmeshed within other aspects of identity, such as class, citizenship, and sexuality. 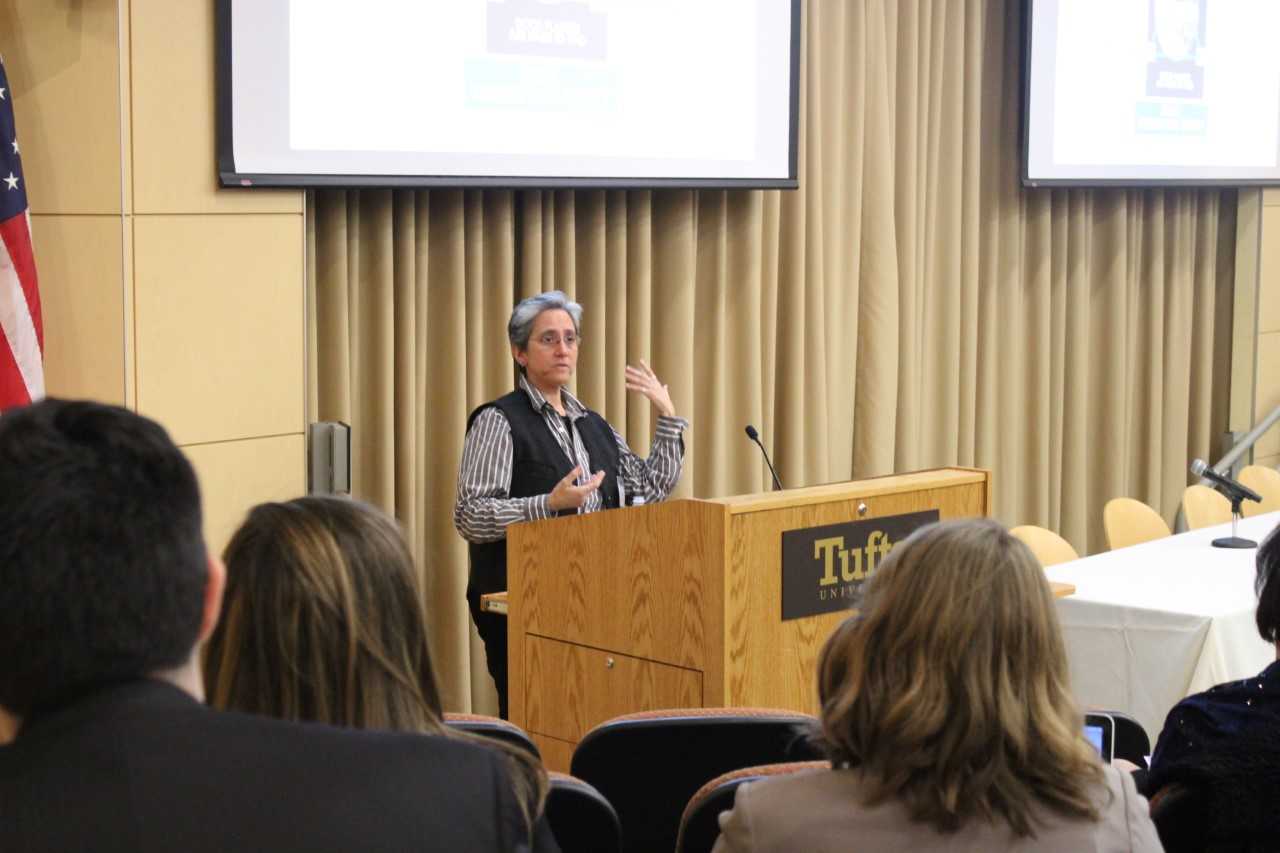 The 2017 conference was particularly focused on introducing a gender lens to professional fields and sectors in which it has been traditionally absent or ignored. The Conference featured the following five panels:

The panels were supplemented with specialized breakout sessions including education in armed conflict and gender and food security. Ultimately, the goal was for audience members to leave the Conference with a broader, more nuanced understanding of intersectional gender analysis and as advocates for gender-sensitivity within their fields of work.

The Second Annual Conference on Gender and International Affairs will be held at The Fletcher School of Law and Diplomacy on December 2 and 3, 2016. The Conference continues a tradition of student and faculty advocacy at The Fletcher School that challenges the institution to integrate gender analyses into all aspects of the institution and its work. This year’s theme, Gender-Sensitive Leadership: Putting Theory into Practice, builds on the ongoing feminist examination of power structures and gendered institutions to identify the contexts and strategies that support gender-sensitive leadership in the diplomatic, business, and security sectors.

The 2015 conference attracted over 250 students, faculty and practitioners, from the Fletcher community and the Greater Boston area, who represented over 40 institutions. Insights gleaned from traditional and new media coverage show that the Conference’s influence reached audiences across the region and became a resource for gender thought leadership. We hope to continue this success and welcome all students, faculty, and practitioners interested in understanding how power and gender influence issues in international affairs and acquiring strategies to promote gender-sensitivity in their work.

Gender-sensitive leadership is the application of feminist theory and power analysis to the daily decision-making processes that uphold or challenge gendered institutions. Its scope extends beyond women’s empowerment and includes the pursuit of equity and inclusion for all populations these institutions aim to serve. Paying greater attention to gendered experiences requires leaders to consider who has access to power and why some voices may be valued over others. The Conference seeks to identify the tangible qualities that define gender-sensitive leadership and provide strategies for leaders to respond to gendered varied needs. Conference attendees will also be empowered to embody and advocate for gender-sensitive leadership within their own institution.

Sessions at the conference will explore opportunities and challenges in gender-sensitive leadership in the following areas:

In December 2015, The Fletcher School hosted its first annual conference on gender issues, titled “Gender and International Affairs: Avenues for Change.” The conference was student-run, organized by The Gender Initiative and Global Women, and it enjoyed wide support from the faculty and administration. Fletcher Dean James Stavridis noted in the program: “Nothing is more important to the overall potential of the world than our ability to fully develop and use the potential of everyone, women and men alike and equally.  The study of gender affords us the best chance of doing so, and deserves our strongest level of engagement.  The Fletcher School of Law and Diplomacy is committed to doing so with energy and enthusiasm, and this conference is a good example of our approach.”

The conference drew together over 300 participants from schools across the Boston area and hailing from countries around the world. Social media activity surrounding the conference hashtag, #FletcherGender2015, resulted in the hashtag trending in the Boston area. The conference also received recognition in Foreign Policy Interrupted, a listserv of gender in foreign policy. For key insights, please see below.

The conference was possible thanks to institutional support from The Office of the Executive Associate Dean and Office of Student Affairs. The organizing committee is grateful to the institutional sponsors: the Institute for Human Security, the Fares Center for Eastern Mediterranean Studies, the Hitachi Center for Technology and International Affairs, the Institute for Global Leadership, and the International Security Studies Program.

The organizers are further grateful to student organizations who lent their support: The Diplomacy Club, Fletcher LGBTQA, the Global health Group, the Human Rights Project, the Humanitarian Action Society, the International Migration Group, Praxis, the Fletcher Journal of Human Security, the Ralphe Bunche Society for Diversity in International Relations, and Tech@Fletcher.

Check out this new initiative from @KimberlyTheidon and @dipali17 on Ecologies of Justice. A new program in partnership with @fletchergender and thanks to funding from @TischCollege.

Stay up to date on their work and exciting speaker series here: https://sites.tufts.edu/gender/ecologies-of-justice/

Join us for Fletcher In The Wild, the inaugural #EcologiesOfJustice event, hosted by @KimberlyTheidon and @dipali17. Share your environmental and more-than-human passions with us on October 7th at 12pm EST. @FletcherSchool @TuftsUniversity
Register: https://eventbrite.com/e/170187781235