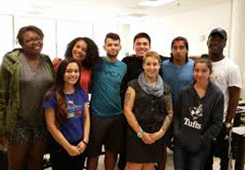 We asked faculty who joined Tufts last year to comment on what their first year had been like, and to offer some advice to new colleagues. Here’s what Dr. Elena Strange had to say.

Laney Strange is a lecturer in the Department of Computer Science at Tufts University (previously at Rhodes College and the University of Memphis). She teaches undergraduate courses across the spectrum of programming, algorithms, computer architecture, and data structures.

What surprised you as a new faculty member at Tufts?

I think what surprised me most was the level of engagement and sense of community among students. It’s something you hear about when you’re interviewing and you talk with people before you come here. I started a program called “Tufts Girls Who Code to teach coding to middle school girls, which is something I had done before. So, I said, “We’re starting this new program on a Saturday, can anyone come out and volunteer?” And I was overwhelmed with volunteers. They were Tufts undergraduate women, computer science majors [volunteering] to teach younger kids how to code. I had more volunteers than middle school girls! It was fantastic. They’re really an engaged, amazing group of students.

What were some of the challenges you faced during your first year teaching at Tufts?

A big part of running a class that big is also managing a large number of TA’s. This was my first time teaching a really big class. I teach comp 11 which about 300 students in two sections. I knew that was going to be challenging going in. The part that was most challenging [was something] that I was not prepared for. A big part of running a class that big is also managing a large number of TA’s. I had 35 undergraduate TA’s. And many of them had TA’d the course before and had also taken the course with somebody else. So, I was in an unfortunate position of replacing someone who was beloved among students. Everybody loved him and he was an amazing teacher. Then I come in and I’m teaching this class and I’m in his office. Some of my TA’s were not supportive when I did things in the class that were different than what the previous instructor had done. What I did in my second semester was I hired a bunch of TA’s who had taken class with me in the fall. That helps a lot. They’re more used to my teaching style. They know what to expect of me. I’m not new to them and that makes a big difference. I wrote a Handbook over the summer with a couple of TA’s who were around. Just a little stuff written down: how do I do [different things], what do we expect of grading, things like that. Learning how to manage 35 people is now part of my job. That has been a very large challenge.

What were you most proud of in your teaching in your first year?

I teach an intro CS course, and anytime I heard a comment from a student who said, “you know I wasn’t sure I wanted to take computer science or I thought it was really scary, but after taking this class I’m thinking about majoring in it.” I heard that a few times the end of my first semester. That’s the best thing. That’s the outcome that I want all the time. So that was great.

What advice would you offer to new faculty now that you have a little time under your belt?

Get a mentor. If your department doesn’t do it for you, then ask for one. I had one and he was fantastic. Given the challenges I had it would have been way worse if I hadn’t had someone to go to for advice and support. So that was really wonderful.

What do you wish you had known?

This is something I didn’t do: Take a campus tour. It wasn’t part of the orientation. I assumed it would be and I don’t know half the buildings on campus. Take an official tour – that would be a real good thing to do. 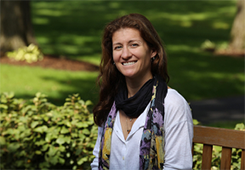 Surprises, Challenges, and Successes In My First Year at Tufts 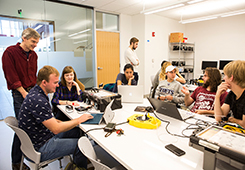 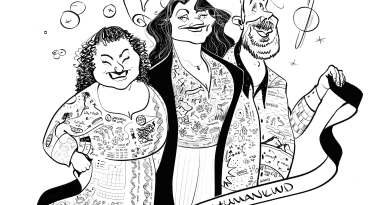