The first team project of this summer is to create a walking robot. These first few days were focused on designing the skeleton with moving legs. Later on in the summer, we will be revising these prototypes and adding electrical components.

In order to be able to mimic an animal-like movement, we first needed to understand how different animals walk, run, and jump. After analyzing the gait of a dog, in which each paw leaves the ground at a different time, we decided against having independent motions for each leg of our creature. Instead, we chose to focus on ensuring that our mover would have a stable base while traveling. Ultimately, we decided to have two sets of four legs, where one set would be responsible for lifting the creature up and moving it forward and the other set would provide a stable base as it moves, similar to the way crutches work.

We modeled the four moving legs after Chebyshev’s Lambda Mechanism. This system of linkages converts circular motion to linear motion. By having two stationary legs and two movable legs on each side of our creature, it will be able to move forward as a central rod is spun. 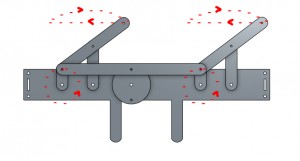 A diagram of one side of the body of our creature with two moving legs and two stationary legs connected by a main shaft and cranking wheel. 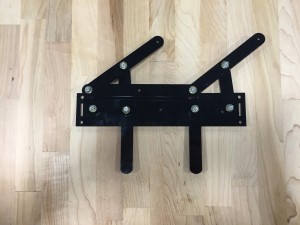 Our first prototype of the cast acrylic linkages

After adjusting some measurements on the rectangular side of our creature, we cut out a new, larger body and used threaded inserts to leave enough room for the linkages to move freely. We also countersunk several holes on some of the links to help avoid any collisions between parts. 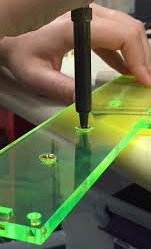 Shortly, we will be adding another linkage with ‘feet’ that will connect the top two sections and serve as the base while the creature moves forward.

Check back next week to see what we’ve been up to! 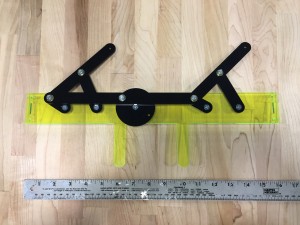