Facts, as John Adams once said, are stubborn things. Even in what seems like a “post-truth” world, or especially then, they matter. 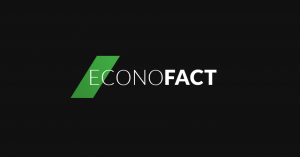 In an era when political polarization drives the perception of truth and falsehoods are spun as “alternative facts,” Fletcher School professor and renowned economist Michael Klein wanted to provide, well, an alternative. That’s how he, along with Fletcher’s Edward R. Murrow Center for a Digital World,  came to create  EconoFact, a non-partisan publication presenting the facts behind national debates on economic and social policies, delivered with analysis from a network of 30 top academic economists. The website, launched on January 22, provides analysis from both sides of the aisle, written in the form of short, accessible, jargon-free memos, aiming to put the cart back in its proper place behind the horse — you get facts before being overwhelmed with contentious opinions.

“We want to emphasize that you can choose your own opinions, but you cannot choose your own facts,” Klein wrote in an article for The Hill announcing the launch of EconoFact.

Some of the first pieces published — written by Klein, fellow Fletcher School professor Joel Trachtman, and other economists from leading universities such as Harvard and Georgetown — focus on the proposed border wall, currency manipulation, the trade deficit, and US manufacturing. Forthcoming memos will look at economic growth, financial regulation, corruption, immigration, and more.

The project’s network has been expanding since Klein began assembling it in the weeks following the 2016 Election, as more and more economists are alarmed by how the angry divisions between Republicans and Democrats, globalists and nationalists, and the many groups in between that threaten to undermine rational policy-making. EconoFact also has the enthusiastic support of the Murrow Center at Fletcher. The Center’s Director, former journalist and Fletcher professor Edward Schumacher-Matos, serves as Executive Editor alongside Klein.

“The emotions and distrust are such today that many of us often find ourselves sticking to our instinctual biases, ignoring the data,” Schumacher-Matos said. “But Americans are overwhelmingly people of goodwill, and want to have a rational debate.”

The memos are meant for policymakers, journalists, commentators, and, most importantly, citizens seeking to become better informed.

By grounding the debate in the facts, EconoFact hopes to let truth lay the groundwork and allow opinions and recommendations rise from there. To emphasize the explanatory nature of EconoFact, posts follow a memo format, with the first two sections presenting the issue and relevant facts, often accompanied by charts or graphics. Only at the end of each post does the economist draw a conclusion or make a policy recommendation. The facts help inform the beliefs, rather than beliefs forming the facts.

“We need a well-informed electorate to demand reasonable policies and to hold accountable those who put in place policies that fail,” Klein wrote. “[And] we believe that … the American public too will want to become more informed as events unfold.”