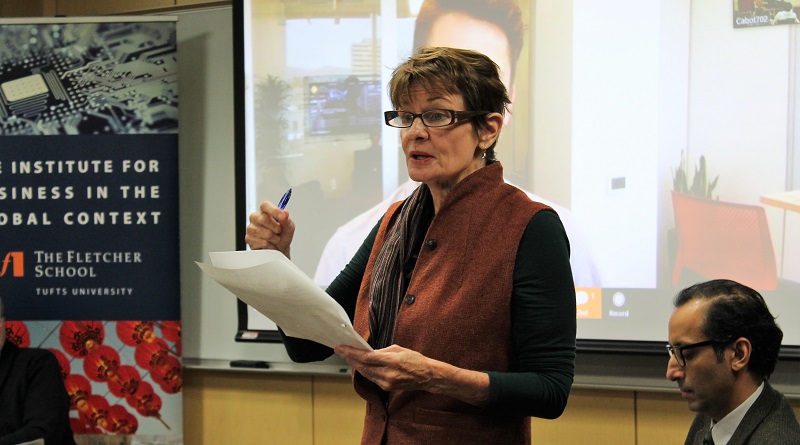 It is a conundrum that has plagued both the private sector and the public sector. Who bears responsibility for solving society’s most pressing problems? Is it the role of business, governments, or both? Who needs to do more? What is not adding up?

Anand Giridharadas’ provocative book Winners Take All raised salient points for that discussion, at the same time sparking controversy. His book confronts the question: Should the private sector, philanthropists, and foundations lead the charge on solving some of the biggest global socioeconomic problems, or do those responsibilities still reside with the public sector and government officials?

It is a simple enough question, but one with no easy path to an answer. Attempting to thread the needle in this journey—at least in the cozy confines of The Fletcher School—requires complicated, wide-ranging debate. And, through the November 2018 edition of Fletcher Reads the Newspaper, the Institute for Business in the Global Context (IBGC) sought to find that complex answer.

The idea behind this initiative is to bring together a diverse and interdisciplinary panel of professors, alumni, and outside experts to discuss pertinent issues affecting the business and the geopolitical landscape at large.

Fletcher’s Dean of Global Business and IBGC Executive Director Bhaskar Chakravorti opened up the panel raising the central question of the private and philanthropic sectors’ role in solving the problems of the public sector. Can the private sector be entrusted to take over those problems that were formerly public?

Chakravorti framed the debate with the prompt, “the job of solving ‘hairy’ global problems should not be turned over the private and philanthropic sector, but should be within the purview of the government.”

To help probe both sides of the central question were an eclectic mix of Fletcher faculty and alumni–both on campus and Skyped in from around the globe–all connected to the world of business via social impact.

Speaking for the motion were Professor Alnoor Ebrahim, Professor of Management and Nathalie Hudson (F’16), a MIB alumna currently working as a Project Manager with Dalberg, based in Kenya.

Hudson got the ball rolling, stating that the current rhetoric of businesses doing Corporate Social Responsibility can be disingenuous. Capitalist systems, she said, purely follow market dynamics. That is, under the current system companies are obligated to deliver for its shareholders, thus only government and the public sector can be truly accountable to acting in the public interest.

Hudson pointed out that many of today’s “big hairy problems” are too big and too long term for philanthropy to solve. On the African continent alone, there are 10 million people joining the work force every year, but today just under 4 million jobs are created each year, That’s a herculean task that no business alone can do. Furthermore, there is a $2.5 trillion investment gap to reach the SDGs, and despite a lot of rhetoric so far business has done little to bridge that gap. She emphasized that government must play a leading role in providing incentives or mandates to invest to solve these problems.

Professor Ebrahim concurred and noted that the top one percent, particularly the elite and philanthropic capitalists, have earned 1.3 million dollars per investment over the past three decades. However, the bottom 50 percent have earned $16,000 dollars per year.  The market cannot solve the problem, because the problem is the market itself, stated Ebrahim. He went on to cite examples, such as Amazon publicizing raising their minimum wage across the board. However, it was only a conciliatory bump, as they rolled back employee benefits to make up for this hike.

He saw this as a quintessential case of business to ‘have its cake and eat it too’. Investment banking giant Goldman Sachs’ 10,000 Women was a women entrepreneurship project aimed at providing mentoring and consulting services for women entrepreneurs. However, Goldman Sachs bankers have also been caught in the 1MDB imbroglio in Malaysia. Larry Fink, CEO of Blackrock, trumpeted doing business for social good, but German investigators have looked into Blackrock for tax evasion. Whether through a focus on the bottom line or more direct indiscretion, business has often been unable to stay out if its own way.

“Winners further win by undermining democracy,” Ebrahim said. “Who is to decide on what is a good social investment and what is not?” We currently have a system of where billionaires such as Jeff Bezos, Bill Gates, and Pierre Omidyar are deciding what’s best for our society through their foundations. Instead, Ebrahim stated that that it would be far more effective if they could use their clout to advocate for corporations to close loopholes and spend more tax revenue towards aims of social good. Ebrahim paraphrased Oscar Wilde, who once said, “people who do the most harm, are the ones who try do the most good.”

Speaking against the motion were Kelly Liu (F’16), a MIB alumna currently plying her trade at Cisco as a Sustainability Manager, and Patrick Schena (F’80; FG00), adjunct Professor of International Business at Fletcher.

Professor Schena’s first caveat was to be wary of people trying to frighten you with mentions of Goldman Sachs or Blackrock. He stated that the belief governments can be called in to fill in the gaps that markets can’t fill is a fallacy. Governments don’t do this in an effective way and are not the alternative to market failures.

Going back to Hudson’s example, Schena stated that if Africa needed 10 million jobs a year, he doesn’t see how the public sector can provide this. Only the private sector can fill such gaps. The opportunities in emerging markets are large, and thus businesses need to invest more as governments have demonstrated that they don’t have the resources.

Liu stated that businesses are already thinking long term, with CEO’s speaking out on climate change. Companies are making public commitments, setting corporate environmental goals, and changing the way they do business through initiatives such as those that lower greenhouse gas emissions or reduce the use of virgin plastic. According to Liu, some companies are already doing more than governments by advocating for systemic change. She asserted that businesses could be more provocative in their corporate strategy to tackle some of the world’s pressing issues, but the solutions still require business to have a seat at the table.

Sitting perched on the fence were Jesse Simmons (F’16), another 2016 MIB alumnus and Senior Investment Analyst with Align Impact, and Kim Wilson, Lecturer in International Business and Human Security.

Simmons stated that the issue with capitalism is that it isn’t immoral, it is that it is amoral. Impact investing is transformational in that it uses market forces to generate meaningful social and environmental incomes with capital that is not only philanthropic. The power of financial markets to generate positive change will depend on those who can provide channels to connect impact-oriented investors with impactful businesses that need capital to scale. Financial markets are only a piece of the puzzle and are inextricably linked with government policy, which underscores the importance of supporting political positions that further social and environmental goals.

Professor Kim Wilson insisted both businesses and philanthropy can do a better at social problems than government. She cited penitent examples to elucidate her point:

In India, government education, according to Wilson, is a “remarkable disaster.” Teachers are on payroll, but don’t show up to work. There is routine beating and very poor pedagogy. Another example pointed to China, where she brought to light the Social Credit Score. A standardized system meant to assess citizens, businesses, and all other institutions, Wilson noted, “if parents were to jaywalk, the likelihood of their children going to the best schools will be diminished.”

Wilson maintained that it is necessary to think about a corporation in its entirety. She emphasized that we need to understand how shareholders and board members can drive change through advocacy and intervention. She asserted that it is not a situation of either-or, but a decision of collective actors that need to come together. Wilson ended by saying we need to “repurpose capital instead of repurposing philanthropy.”

After arguments from all of the debaters and lively conversation with the Fletcher audience, consensus was nowhere to be found. Despite a valiant effort, a single answer to such a thorny problem could not be reached in just in hour. The question remains: Where does the responsibility lie when it comes to confronting the most pressing global issues?

at @FletcherSchool, @TuftsUniversity Exploring the world of business through politics, people & the planet. The Ease of Doing Digital Business https://t.co/fy7Q0COXzu

Who will win the 2020 Tufts $100K New Ventures Competition? Tune in tonight to find out!

Join us to show your support for our Fletcher team, represented by Nitin Malik & Mohit Saini

Join us on Zoom at 4:30 PM to watch #FletcherDPrize winners Nitin Malik (F20) & Mohit Saini (F21) pitch their venture Resonance Lab in the FINAL round of the Tufts $100K Competition, hosted by @TuftsGordon Institute.

Check your Tufts email for a Zoom link!

In terms of the great powers' response to #COVID19, "all of them have taken a hit - except for S. Korea." But even if the federal government hasn't done that well, the states' governors and mayors have done very well, #FletcherProf @dandrezner says. https://www.facebook.com/TrumanProject/videos/525096874819969/UzpfSTExMjE2NDk1MTA0MjoxMDE1NzkxMDUzODkyMTA0Mw/