“The age of high returns over the last thirty years is over,” declared Patrick Kocsi (F96) at his October 16 talk, part of the Institute for Business in the Global Context (IBGC) Speaker Series. “Today, we’re at a point in the credit and equity markets where things are starting to flash orange.”

From ancient Mesopotamia to China in early 1980s and up to the nexus of change staring us right in the face in 2015, Kocsi, Senior Managing Director and Head of GE Capital, Equity, took the audience on a journey through the history of money, equity, and the ever-shifting winds of the world economy. The self-declared “optimist” looked from the past to signals in today’s credit markets as a sign that we stand on the cusp of an inflection point in global finance. 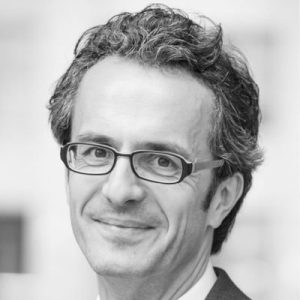 As he presented it, not even unrelenting optimism allows you to ignore the writing on the wall. “When debt grows faster than GDP,” Kocsi added, “it’s probably not a good thing.”

According to Kocsi, high rates of growth in China, India and other countries – buoyed by low interest rates, high debt levels, and significant and seemingly unsustainable returns on investment – are unlikely to continue in the near future. For Fletcher students, slow growth will almost certainly play a significant role in their professional and personal lives as corporations, non-profits, and governments begin to reign in spending and increase savings.

As the latest guest in IBGC’s long-running Speaker Series, Kocsi brought a refreshing air to a topic that lends itself to doom-and-gloom prognostication.

For more than 14 years, the IBGC Speaker Series has brought in global business leaders to speak to and engage with Fletcher students. Past speakers have included African Development Bank President Donald Kaberuka and Caffè Nero founder and CEO Gerry Ford (F84).

States have rushed to expand #telehealth policies for their residents — but what is the point of such services without access to reliable, high-speed internet?
Our work explores which states had the plan, and which of them executed it correctly: http://bit.ly/2D6Rtcf

The Institute for Business in the Global Context@IBGC_Fletcher·
6 Aug

Lawmakers keen to break up #bigtech like Amazon and Google need to realize the world has changed a lot since Microsoft and Standard Oil...

Learn more about the latest #research from @IBGC_Fletcher & @planetdgtl in this interview with #FletcherDean of Global Business Bhaskar Chakravorti 👇 https://twitter.com/digitalplanet/status/1290691495360692228

Which countries are best / worst prepared for home working?

The Institute for Business in the Global Context@IBGC_Fletcher·
4 Aug