Mastercard’s Chief Security Solutions Officer Ajay Bhalla was on campus on Wednesday, March 28, to discuss the ways in which companies need to reimagine the relationship between technology and human understanding to stay relevant.

Bhaskar Chakravorti, Senior Associate Dean of International Business & Finance at The Fletcher School and the founding Executive Director of the Institute for Business in the Global Context, introduced Bhalla to the audience of students, faculty, and administrators. Chakravorti and the team at IBGC have been working with Bhalla and Mastercard since 2011 developing the Digital Evolution Index, a measure of digital change and trust across the globe. The issue of trust is a key one for Bhalla, who is responsible for ensuring the safety and security of every payment for the over two billion cardholders using the Mastercard network. 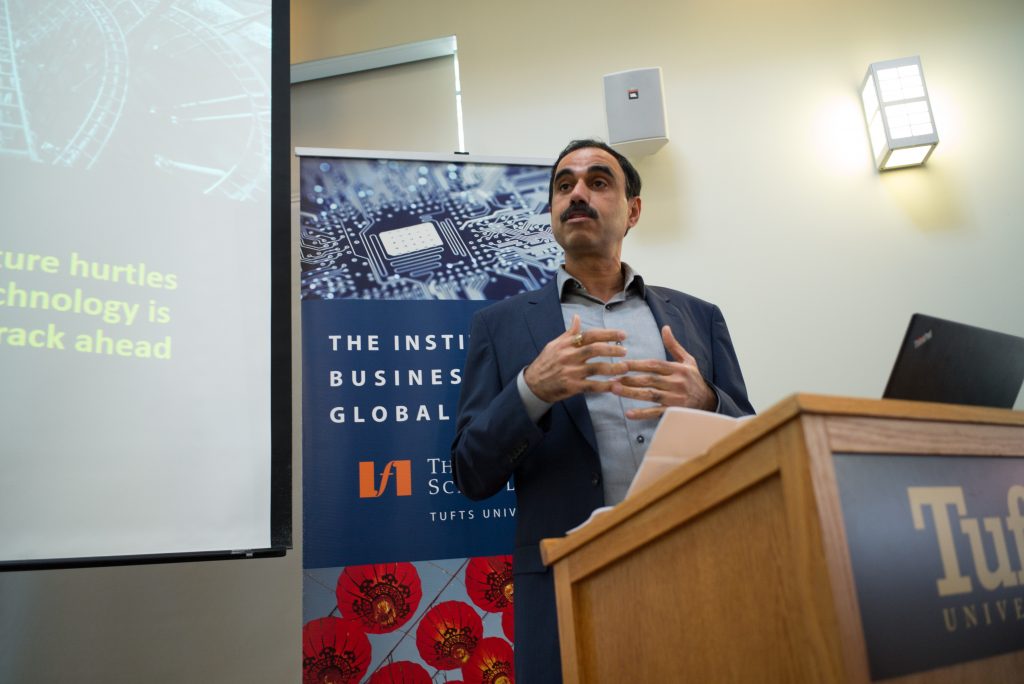 During his talk, Bhalla compared the rapid change in technology throughout the past few decades to a rollercoaster. “Riders are comfortable in one moment and then the rollercoaster flips upside down,” he said. He went on to note that in combining rapid technological innovation with the pace at which human knowledge is expanding globally, changes in technology can be expected to create some uncertainty.

Still, Bhalla challenged users and companies alike to take a “leap of faith” into the future. These leaps include embracing the Internet of Things, which will allow for nearly 50 billion devices to be connected to the internet by 2025.

“We’re not just talking connectivity,” Bhalla posited, predicting what that future might look like, “we are talking about devices that are intelligent enough to communicate with one another and make decisions for you.”

In addition, he noted that the cornerstone industries of the global economy, such as transportation, shipping, banking, and finance, will continue to reinvent themselves as new waves of technology emerge.

“Within the next 10 years, half of the global transactions taking place will be done via biometrics,” said Bhalla. “Developments such as driverless cars and drone deliveries could create new jobs within the transportation sector.”

However, Bhalla was not blind to the fact that rapid change has created current and future challenges, particularly where international laws addressing contract issues and data privacy have been unable to keep up with the pace of advancement. And, as ever more personal data comes online, “businesses will need to ensure that they can be trusted and that they can store data properly,” he said.

“We see trust as a currency,” said Bhalla. “In this case, collaboration among companies is so important because data resides with multiple sources. When trust is breached in any way, corporations will certainly lose face and serious money.”

As an example, Bhalla cited the popular Apple Pay innovation. While it may appear as though your Mastercard is on your device, it’s really a “token” connected to your account. This way, if the phone is stolen or if there is a data breach, personal account information remains safe. These types of collaborative, data-sharing efforts will be critical to success for companies competing in the digital world.

“So, next time you travel to Costa Rica and your Mastercard is declined, you can just call Ajay’s team,” IBGC’s Dean Chakravorti quipped.

“It won’t be my guys,” Bhalla responded. “You’ll have to talk to the robots.”