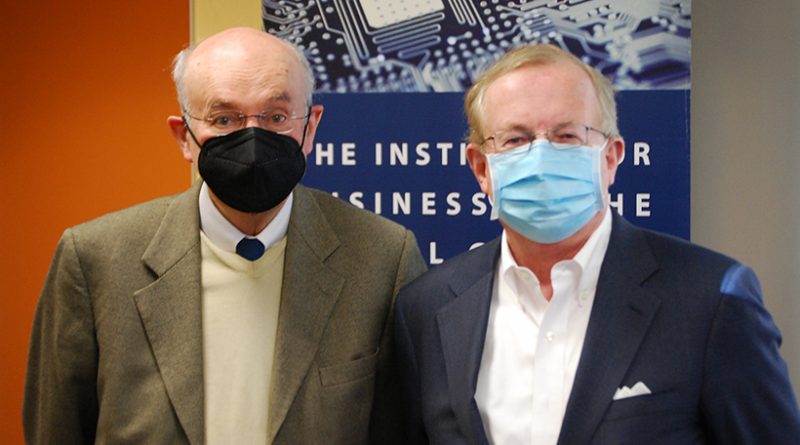 On Thursday, April 14, the Institute for Business in the Global Context (IBGC) had the pleasure of welcoming Dr. Paul Toldalagi, FinTech CEO, Advisor and Board Member of L4S Corporation to campus to discuss trends in the emerging FinTech industry and the impact of FinTech on the traditional financial sector. The talk was hosted by Professor Laurent Jacque, Walter B. Wriston Professor of International Finance & Banking and attended by students who joined both in person and virtually, as well as by Dr. Toldalagi’s daughter who is a Tufts undergraduate student.

Dr. Toldalagi began his talk with an overview of FinTech, also known as financial technology, and talked about how it is a constantly evolving field that first emerged in the 21st century following the “internet bubble” and which originally aimed to modernize the back-office systems of large financial institutions. However, since the explosion of smartphones and data collection, the field has largely shifted towards providing low-cost automation and empowering individual customers across a range of client services.

The FinTech innovation landscape largely consists of cryptocurrency, blockchain technologies, and open banking systems. FinTech companies often take advantage of digital services to transfer payments or other transactions in the form of digital assets or “tokens”. This has led to significant growth for instant payment services and person-to-person (P2P) transactions. According to Dr. Toldalagi, 50 percent of U.S. consumers under 40 use P2P services like Venmo or Zelle at least once a week.

This high rate of growth has led to tension within the field, which aims to democratize financial services and provide a channel for transactions outside of traditional financial institutions. However, as the FinTech field has become more ubiquitous, it has become more difficult to maintain this ideal, and it has also become subject to an increasing amount of government regulations. For example, the U.S. has recently begun taxing profits from cryptocurrency and the Federal Reserve is now requiring traditional banks to use a centralized digital platform.

As Dr. Toldalagi explained, one particularly large area of growth has been in blockchain technologies. The initial technology was created in 1991 and based on a simple linear structure of linked “blocks” that contain records of encrypted information. Each block is connected to the blocks on either side, meaning that the data is interlinked and cannot be tampered with, otherwise the entire data chain will be incorrect. Blockchain can be a very resource-intensive because it relies on a network of individuals who mine and validate the data. Traditional financial institutions have tried to utilize blockchain technologies but have faced difficulties in creating a platform that has optimal security, is decentralized and is scalable. For example, a cryptocurrency like Bitcoin can be secure and decentralized but is difficult to use at scale. However, companies like Visa or Mastercard are very scalable, but rely on high centralization, which is counter to the goals of blockchain and cryptocurrency technologies.

As part of the Q&A section of the event, a student asked about whether blockchain or cryptocurrency technologies could play a role in protecting countries like Russia from foreign sanctions. Dr. Toldalagi responded that there is definitely some risk that the proliferation of these technologies could lead to things like sanction or tax evasion. However, he said that it is unlikely to be a perfect loophole since government regulators like the IRS are likely to find those accounts sooner or later. Since assets can’t just disappear, it is likely that some sort of paper trail will exist and there has already been work done to investigate certain Russian oligarchs who are suspected of moving assets to cryptocurrencies.

This question led to a discussion about the pros and cons of FinTech and distributed finance when compared to traditional and centralized finance. According to Dr. Toldalagi, there are some common criticisms of centralized finance made by those working in FinTech. These criticisms include that centralized finance has slow transaction and settlement times, it has high intermediary costs, there is a lack of transparency, and it favors access for wealthy clients and institutions while leaving out low-income clients and emerging markets. On the other hand, FinTech can also be difficult to access, require significant energy resources, can be unpredictable and can result in huge losses. Overall, it was clear from Dr. Toldalagi’s talk that although there are huge opportunities in the FinTech space, there remain some issues that remain before it can be a truly democratic, accessible, and practical field.

Dr. Toldalagi concluded by saying that there are also significant opportunities for policymakers and regulators to better understand the field and that hopefully there will be some Fletcher students who are ready and willing to step into those positions!