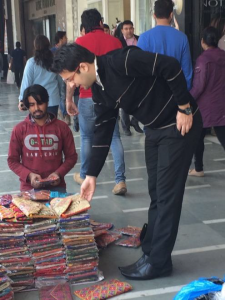 My winter research opportunity took me to New Delhi. The task at hand? Analyze the socioeconomic impact of four specific proposals for financial inclusion and entrepreneurial development of street vendors in India:

A law passed by the Indian parliament called the Law for Regulation and Livelihood Protection of Street Vendors in 2014, and served as a trigger point for this research. The purpose of my visit was to seek input and obtain data from key stakeholders. I chose New Delhi due to the sheer number of street vendors and agencies associated with their management and advocacy.

My first trip was to the heart of Delhi, Connaught Place. Before I could successfully study street vending, first I had to become a consumer. The sheer cost effectiveness and convenience that these vendors bring to life makes them outstanding. Interestingly, I spotted as many women as men trying to sell their products. Connaught Place is considered one of the upscale markets in Delhi and to see a mix of neon lights, pubs, and street vendors, all catering to the same section of consumers, was a unique sight.

The second market I covered was the Sarojini Nagar market — one of the more organized hubs of street vending in Delhi. From cushion covers with authentic gujarati embroidery to Bob Dylan posters, luggage trolleys to multi cuisine food, the sheer variety of offerings made these vendors stand out. Bargaining is the norm in street vending culture — no matter the depth of your pocket, everybody bargains in the streets of New Delhi. While vendors do appear efficient in the business management, many of their surroundings are unclean and littered with plastic package material  food waste — most vendors didn’t bother to pay attention to anything except personal belongings. While Delhi’s citizens certainly gain from their presence, the city’s civic amenities certainly suffer.

My first higher-level meeting was with the Head of Finance at New Delhi Municipal Corporation (NDMC). NDMC is one of the municipal bodies in the city. Geetali Tare, a welcoming government official, offered her insights into the NDMC’s approach in managing the street vending sector, voicing concern about the need to balance Delhi’s urban needs. Primarily, maintaining cleanliness and world-class civic amenities while continuing to nurture its soul through preservation of art and the street vendor culture.

I also met the National Coordinator of National Association for Street Vendors in India (NASVI), an organization engaged in street vendor advocacy across India. NASVI has close associations with many vendor unions across India. Their present goal is the ratification of amendments in the Law for Regulation and Livelihood Protection of Street Vendors passed by state government of Delhi. In their view , the law has some unfair provisions, such as a ban on cooking in the streets, limiting operation time for street vendors until sunset, and other issues. NASVI is also engaged in offering micro credit to street vendors and intends to scale up this initiative. The officials reported a positive response from street vendors to this initiative, however, as in many micro credit operations, there are issues surrounding the usage of credit not just for business development but for personal needs such as marriage of children, house repairs, etc. However, NASVI officials term this as a good start.

Overall, my meetings with various officials and organizations helped me to conclude that street vendors in India remain an integral part of Indian consumer experience. The sector’s organization would be welcomed by all, yet they are not a priority. On a lighter note, my experiences in India often remind me of the Indian marriage, where the real work gets done when the flutes start playing. The time for a paradigm shift in street vending sector may not yet be ripe, but is certainly not too far off either.