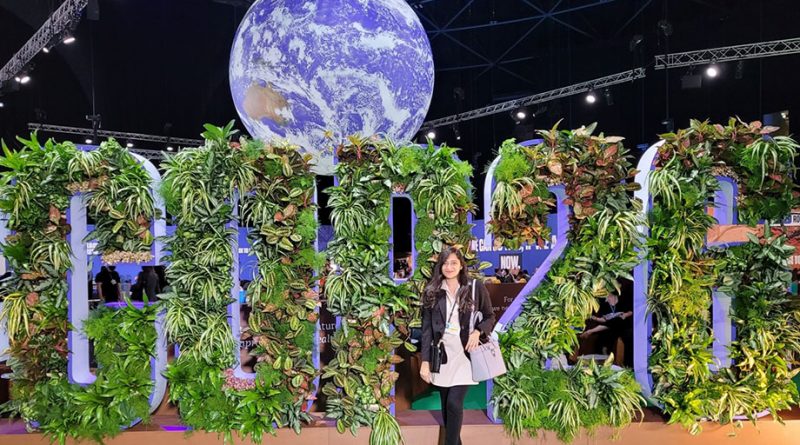 Achievements in Spite of Opportunities Missed

In my first semester at Fletcher, I participated in a negotiation simulation as part of the Sustainable Development Diplomacy course taught by Professor Mihaela Papa, where a group of eight students had to decide on a shared common resource, which made me realize how difficult and frustrating it is to get everyone to agree on specific terms. But to observe it in real life only months later, at the United Nations Conference of the Parties, with 80+ countries negotiating and haggling over every word in every line of an agreement that could shape how nations report progress on cutting greenhouse gas emissions, how global carbon markets function, and how the rich countries of the world deliver on promises to help more vulnerable nations, was an experience like no other.

Attending COP26, after haphazard planning, fundraising, and navigating through a web of COVID-19 precautions, was a tremendously powerful moment for myself. One of the biggest reasons as to why I wanted to attend COP26 is because I am interested in the harmonization of green regulatory frameworks and how they can reduce future trade barriers, lower North—South tensions over market access and subsidies and decrease trade disputes. Most of my professional background is in trade and industrial policy research and I believe it is imperative for countries to make trade strategies a central part of the solution to the environmental challenges we face. While trade and climate change policy making have existed in separate silos, the urgency of the climate crisis demands that greater attention be given to the role of trade in accelerating emissions reductions and mitigating the effects of climate change while pursuing sustainable growth. With regards to this, what I witnessed at COP26 was greater than what I had in mind. The climate talks offered a chance for scores of world leaders to unfurl a litany of long-term promises. There were new coalitions of nations working to halt deforestation, others to curb the powerful greenhouse gas methane, and still more promising to stop spending tax dollars to fund overseas fossil fuel projects. Financial giants, meanwhile, pledged to use their monetary might to help the world hit net-zero emissions by the middle of the century.

Throughout the first week of the conference, I witnessed an incredible amount of climate leadership coming from grassroot organizations and other non-governmental organizations, but I cannot say the same for those in power in governments and industry, especially those whose economies rely on fossil fuels. I was lucky enough to attend a high-level negotiations session, where countries were negotiating on the terms in Article 4 and Article 6 of the Paris Agreement. I went into the session excited and hopeful, especially because of the sheer power and ability of the individuals in that room to make a lasting change. However, the reluctance of a few developing and fossil-fuel backed economies to accept definite targets and commitments to long-term goals towards climate mitigation, left me feeling hopeless and disappointed. This goes to show how the decision-making power is skewed towards rising economic powers and vastly resourceful economies. Interestingly, these are also the same countries that suffer the least from climate change. Unsurprisingly, what I further witnessed was that the majority of countries that do suffer from devastating effects of climate change did not get to contribute towards the negotiations process in any way. As an observer and a global citizen, it makes me wonder whether it would be too late for these most-affected countries for their plight to be taken seriously. Maybe only then will the biggest polluters realize that prioritizing their self-serving economic goals are not worth the irreversible damage caused by their actions. I am afraid if by then any future commitments and promises will be enough to prevent their own demise.

The sixth assessment report by the IPCC on climate change is clear: the Paris Agreement targets of limiting 1.5-2 degrees of warming will be beyond reach unless there are deep reductions in greenhouse gas emissions right away. António Guterres, United Nations Secretary-General has termed it “code red for humanity”. But the pledges don’t go far enough to limit temperature rise to 1.5C. The signing of the Glasgow Climate Pact with the use of progressive but weak language led to an agreement by countries to “phase-down” rather than “phase-out” coal, particularly due to the opposition by China and India – their words mirroring the need to prioritize development agendas and poverty eradication.

With that being said, there is still hope: only if top-emitting countries respond with aggressive efforts to reduce greenhouse gas emissions. While some may have come out of the conference disappointed, a lot was still achieved during the two-weeks of negotiations. Over 120 countries, representing about 90 per cent of the world’s forests, pledged to halt and reverse deforestation by 2030. The private sector also showed strong engagement with nearly 500 global financial services firms agreeing to align $130 trillion – some 40 per cent of the world’s financial assets – with the goals of the Paris Agreement. Over 40 countries pledged to phase-out coal, the biggest CO2 emitter. The Global Methane Pledge was also announced, with over 100 countries representing 70% of the world economy, agreeing to cut emissions of this deadly gas by 30% by 2030.

One of the most powerful things I witnessed at COP26 were the initiatives taken by the youth and common people, to hold corporations and governments accountable and demand for concrete climate change prevention and adaptation actions in their communities. While the conference was attended by over 25,000 people, the scene outside the doors of the conference hall was most spectacular. It was exhilarating to find thousands of people from all over the world, crossing multiple barriers, huddled outside the conference premise, displaying slogans, demanding for countries to ACT NOW.

Over 100,000 people marched in the city center during my last day at the conference, and while I was worried about not making it to the airport on time to catch my flight, the atmosphere around Glasgow was magnificent. From marches to strikes, and occupations to roadblocks, the activism showed that there is a real chance to foreground the voices of those people on the frontline of the climate crisis and push back against the influence and ‘green washing’ of corporations and governments.

A wide-ranging coalition of people came together for what they considered a common cause, and it was this joint effort by common citizens that made global headlines.

I personally witnessed the self-less efforts made by thousands who left everything at home and came to Glasgow to show solidarity, and this gives me hope for a cleaner future. I would like to believe that while the self-serving actions of a few individuals and corporations has led us down the path of an unprecedented climate crises, it is the activism and sense of responsibility of the common people of the world that will guide us out of it. We as common citizens must come together to demand for a better world, and we must continue to hold our leaders accountable. The time is now.

COP26 is one of the most significant events of our lifetime and I am eternally grateful to CIERP and IBGC for making my participation in it a reality. I am also thankful to the Fletcher administration and the Tufts Office of the Provost for their assistance during the travel process, and to my professors for providing me with guidance and support.