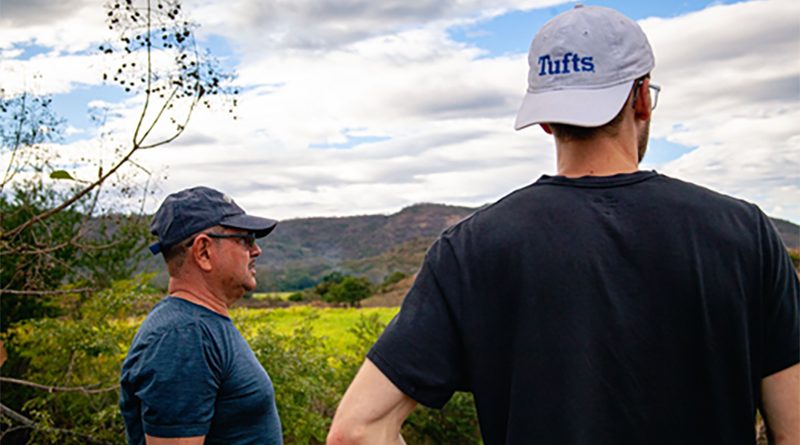 At Fletcher, David Folsom, MALD ’22, and I focus on International Finance, which makes remittances an unsurprising interest area for us. The global remittance market was valued at ~700B USD in 2020, quickly growing every year. Not only is the market substantial, but it carries issues with regulatory compliance, human displacement, and general banking frictions (i.e., internal banking operations to move money across borders). Seeing an opportunity to mesh our studies of finance and economics with social impact, David and I designed a capstone to propose a for-profit venture solution to remittance market frictions. Our initial research quickly led us to focus on El Salvador, a remittance-reliant country we visited in January with the support of Fletcher grants to perform in-depth primary research.

While 17th in terms of population, El Salvador is 4th out of Latin American countries in annual remittance volumes. In 2021, the president enacted a law making Bitcoin legal currency in the country, announcing this might reduce the $200M or more lost in remittance fees every year. The government launched a Bitcoin wallet and provided all Salvadorans who signed up $30 of Bitcoin as an incentive. With this in mind, we wondered if remittance recipients might desire a blockchain-based application enabling nearly fee-free, instant remittance transfers recipients could save, transfer, or spend via a card and mobile application. However, our research suggests such an application is unlikely to take off due to technical constraints, limited economic development, a highly fragmented remittance distribution market, and limited profitability on the receiving side.

Salvadorans are unlikely to be tech-savvy with a growing distrust of technology and blockchain- or crypto-based products. Though we only interviewed a handful of people, we heard technical literacy lags in El Salvador. Many people have smartphones but use few applications, primarily relying on subsidized or free applications such as Facebook or WhatsApp – both of which do not consume costly data. Even if Salvadorans desire to use other applications, connectivity may be lacking. My experience with Movistar in the country confirmed secondary reports that smartphone connectivity is inconsistent: I had phone service ~40% of the time and rarely had 3G when a connection was available.

The Salvadoran government launched a Bitcoin wallet called Chivo that reduced trust in fintech and crypto-wallets. Though the government promised users $30 of Bitcoin when they signed up to use the application, thousands reported their identities were stolen in the sign-up process, robbing them of $30 and potentially barring their use of the application in the future. Additionally, using a Bitcoin ATM to cash out, which is practical in El Salvador, is confusing for most. It was common to see ~5 support staff at each Chivo ATM; however, we never saw Salvadorans use the machines. An anti-Bitcoin rally on our final day in the country affirmed our suspicions that Salvadorans are unlikely to trust crypto- or bitcoin-based technologies any time soon.

With El Salvador’s current state of economic development, digital payment solutions provide users minimal value. 90% of El Salvador’s businesses are informal, which means they are unlikely to have bank accounts. Without bank accounts, these businesses rely on cash payments. Thus, for the average Salvadoran, depending on these informal businesses for consumption, there is no reason to use anything but cash. Additionally, as much of the nation is living near day-to-day, money coming into homes is quickly spent rather than stored or saved.

Offering a remittance retrieval service in El Salvador would compete in a highly fragmented but intricate market. Our research with banks identified the largest remittance service in El Salvador commands ~30% of the market. Gaining this market share is complex as the bank partnered with many fund distributors to reach recipients. For example, a bank may deliver remittances through its branches or sub-agents, like corner stores or regional banks. Any remittance operator within the country would need to partner with as many distribution entities as possible to pay recipients conveniently. This results in a complex contracting process and time-consuming settling of accounts.

Heavy in-country competition aside, paying out remittances provides limited profit. Though remittance services charge a ~2.5% fee per transaction, 80% of this fee is eaten on the sending side, leaving no more than $2 for banks and distributing against in El Salvador. Banks report to make little or no profit on remittance distribution but see it as a way to build relationships with recipients, eventually providing accounts or credit. However, the conversion rate from receiving remittances to opening accounts or using other bank services is not reported.

Adopting Bitcoin as a legal currency likely has not improved economic wellbeing for most Salvadorans. Most cannot access its potential benefits or see using the currency as speculative and applications supporting it as risky. While we still desire to provide faster, more reliable, low-fee remittance services to El Salvador, we do not believe operating in the country is feasible. However, a third of El Salvador’s population lives in the US, and most send remittances. These folks are likely un-banked currently. Over the next few months, we plan to test the hypothesis that we could provide bank-like services to migrant workers. For example, a service cashing checks, storing value, enabling spending via a card, and instant fund access for international family use may provide value.

While companies like Western Union have dominated the remittance market for decades, new services built with blockchain technology are about to disrupt the industry. It is now possible to send money overseas instantaneously and for free. However, as with many new technologies, some barriers prevent those who could benefit the most from gaining access. For migrant workers in the U.S. and their families back home, lack of formal financial inclusion, low trust in financial technology, and irregular access to the internet are preventing the widespread adoption of blockchain digital wallets. For the last six months, Eric Flood and I have been designing a way to bridge this gap and bring this technology to migrant workers in the United States.

We quickly realized that the “last mile” delivery of cash to family members abroad would be the most difficult piece of the puzzle. That is why we traveled to El Salvador over winter break with help from the LF to meet with the key stakeholders in the current remittance process. Over two weeks, we met with everyone from the Minister of Economy, the leadership at four major banks and credit unions, the El Salvadoran Chamber of Commerce, and rural remittance recipients to understand the money journey from end to end.

The current remittance process has numerous actors on both sides of the border. Roughly 80-90% of transactions start and end in cash—this is what that process looks like today:

If you add transfers between Agents on the El Salvadoran side, there can be as many as six organizations between the sender and recipient. Every person in the chain takes a cut of the sending fee; however, most of the leverage is on the sending side, and this is where most of the fee is taken. For example, if it costs someone $10 to send the remittance, only $2 makes it to El Salvador to be divided between the Agents and their Subagents.

When we spoke to people, we were struck by how few remittance recipients had considered alternative methods of picking up their cash. Traveling to the nearest town, waiting in long lines at the banks, and answering invasive questions from the teller just to get paid was the accepted norm.  This was initially puzzling because, as it turned out, basic checking accounts in El Salvador were remarkably easy to open with just an ID. Even mobile banking services are widely available. Why don’t remittance recipients sign up for an account, get a card, and withdraw from their remittance from the nearest atm at their convenience? As it stands, they go to the bank every few weeks to pick up cash anyway.

When we asked why this was the case, one interviewee stressed that the pick-up method is determined by the person sending the money. We realized that even though it costs less for the remittance agent in the U.S. to send money to a bank account in El Salvador, there is no fee differential for the sender unless they also have a bank account. Depending on the service, it can be more expensive to send in cash from the U.S. to a bank account in El Salvador (versus cash pickup). Unsurprisingly, the vast majority of migrant workers in the U.S. are unbanked, precluding both them and their family members from accessing cheap and convenient remittance services.

The key insight from our travel was that banking and affordable remittances are tightly connected issues, and any solution that aims to solve the latter must also address the former. We believe that a cheaper and more convenient remittance process is a powerful incentive for people on both sides of the transaction to become included in the formal financial system. In other words, the path to providing cheap, blockchain remittances runs through basic banking services designed for undocumented migrants. Armed with a deeper understanding of our in-country research, we are ready to focus on building our solution.