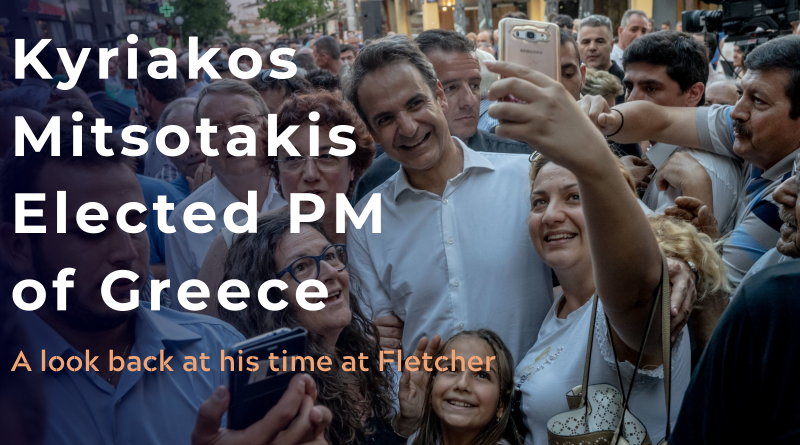 Three years ago, IBGC hosted the “Greece’s Turn” Conference. The event brought together important politicians, policymakers, academics and business leaders in an attempt to understand the challenges facing the economically-devastated country. Among the keynote speakers was Kyriakos Mitsotakis. In 2016, Mitsotakis was the president of New Democracy, a center-right liberal-conservative political party in Greece. In modern politics, New Democracy has been one of Greece’s main political parties along with its historic competitor, the Panhellenic Socialist Movement. On Monday, July 8th 2019, Mitsotakis was sworn in as Greece’s new Prime Minister– a reality many thought would never come true.

Kyriakos Mitsotakis’ political career has been tumultuous, to say the least. For years, a large portion of the Greek population have been quick to express their discontent for the former President of the New Democracy. His critics claim that his political career is attributed to nepotism and that he’s unable to handle the complexities of the country’s difficult economic and social challenges. Yet Mitsotakis’ educational and professional history prove otherwise. After earning two master’s degrees at Stanford University and Harvard Business School, he spent the early years of his career at Chase Investment Bank and McKinsey & Co. Here he spent his days as a financial analyst, specializing in financial services and telecommunications. Before moving on to politics, Mistotakis spent a short stint as the CEO of NBG Venture Capital, a subsidiary of the National Bank of Greece that he founded.

By the time Mitsotakis participated in the “Greece’s Turn?” conference, he was well acquainted with the financial intricacies and complications of his country. The conference took place during a critical time for Greece due to a variety of factors, both within and beyond its control. These factors included economic, political and demographic crises, which beset the European Union as a whole. While none of these challenges were particularly unique to Greece, the country did sustain the harshest blows from the recession. Even a decade later, the country is still recovering from the financial wounds it sustained in 2009, putting intense pressure on Mitsotakis and his administration.

Mitsotakis’ critics were proved wrong at the “Greece’s Turn?” Conference, for he brought many thoughtful, informed and practical ideas to the table. In 2016, several notable EU technocrats and business experts stated that to improve Greece’s bleak financial state, reforms in education, public administration, and labor and product markets must be made. Kyriakos Mitsotakis staunchly supported this claim. During his panel’s discussion, he highlighted the importance of making a convincing and passionate case about the need for targeted interventions to open up product markets, privatize public assets, boost entrepreneurship, address Greek banks’ liquidity problems, restructure public administration and reform the education system. According to Mitsotakis, anything less aggressive would likely result in a jobless recovery, which wouldn’t improve Greece’s competitiveness problem. Mitsotakis expanded on this idea: ““What Greece needs is an aggressive growth strategy that will push the share of investment to 20 percent of GDP, make the economy more open, and increase the share of exports to 40 percent [of GDP].”∙

Despite its dismal state, hope for the country wasn’t abandoned at the conference. Analysis quickly turned into brainstorming and planning between powerful political leaders, knowledgeable academics and financial executives. As the discussion carried on, Greece’s outlook didn’t seem too bleak. Participants, including Mitsotakis, agreed that a long-term national strategy needed to be set in place to restore comparative advantages and reverse the perilous economic situation. The nucleus of  economic recovery is Greece’s human capital, energy resources, strategic geopolitical position, and an emerging class of young entrepreneurs, who bring new ideas and innovations to the Greek marketplace. Together, these factors make Greece unlike any other nation in southeast Europe.

Three years ago, building a consensus-driven political system was one of the top priorities for the country’s recovery. Mitsotakis’ administration, so far, seems adamant in sticking to this plan. Mitsotakis named a cabinet reflecting the balance that must be maintained between the New Democracy’s right wing and liberal strands. He selected a Nikos Dendias, a politician known to be moderately liberal, as his foreign minister and Nikos Panagiotopoulos as minister of defense. Panagiotopoulos’ position is especially important, seeing relations with Turkey are especially strained at the moment. Additionally, Mitsotakis chose two members of New Democracy’s harder right wing for second-tier ministries in his administration a former center-left party member to lead the ministry of the interior. With 49 ministers and deputies, his cabinet is much larger than the norm in Greece. In order to move forward, Mitsotakis’ administration will be tasked with reshaping the Greek political system to claim ownership of a new agenda that satisfies both the country’s creditors and the Greek people.

The nation has also begun separating itself from a culture of dependency on the state and has been moving toward a more proactive role for citizens, specifically younger generations. During the “Greece’s Turn?” Conference, Mitsotakis remarked on this transition:

“[Greeks] have changed their value system in favor of meritocracy, a sense of responsibility that is witnessed on numerous occasions. …[A] different economic, social and political model can be built based on this realignment of values.”

Since Greece’s economic collapse, it’s population understands that populism cannot offer a sustainable solution for such a complex issue. Combating the country’s economic turmoil will require a more moderate and politically-focused approach. With the remarks made by Mitsotakis at the “Greece’s Turn?” Conference and his recent political achievements, Greece may be on it’s way to better days. The conversations that take place during the “Turn?” series conferences are important– and Mitsotakis’ election support this claim. In times of crisis, it’s important to be collaborative, receptive to new ideas and relentlessly positive and forward-thinking. This is the founding principle the conference series was built off of and one that we will happily continue to promote, year after year.