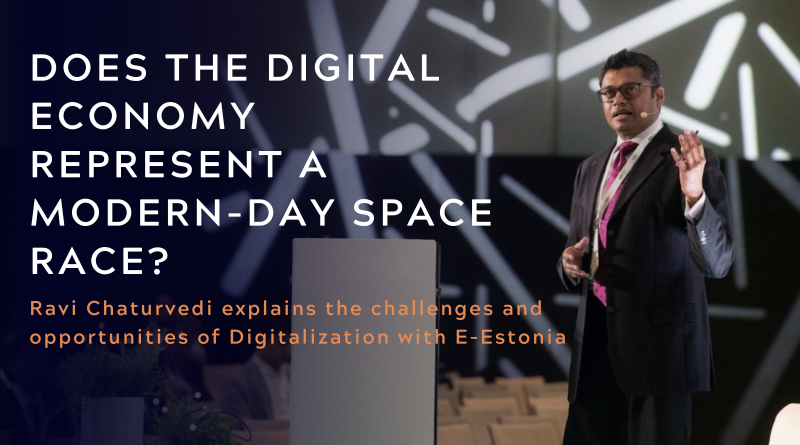 Is digitalization the new version of the space-race?

This was a question raised in a recent interview between E-Estonia, an organization that facilitates interactions between Estonia and its citizens through technology, and IBGC’s Ravi Chaturvedi, Associate Director of Research and Doctoral Research Fellow.

To Chaturvedi, the answer to this question is simple; no, digitalization is not the modern day space-race. He believes that making such comparisons isn’t suitable or even helpful in referring to the new data economy. digitalization, which he defines as “a process where every day human interactions, transactions and consumption of goods, services, information and ideas are primarily conducted through the internet and internet-based technologies”, is not a zero-sum game, nor does it have a defined “finish line”.

Chaturvedi prefers to approach the subject from a globally-focused angle, illustrating digitalization as a “rising tide that lifts all boats irrespective of the flags flying on their sterns.” To him, its ultimate goal is to enhance the quality of life and human condition on a global scale. A goal of this magnitude can’t be achieved alone. It requires a collaborative effort across all countries, both digitally-advanced and emerging, and across all sectors.

This may seem idyllic, and Chaturvedi knows it. He admits that digitalization may very well have an opposite effect. For example, it could distribute global power unequally and exacerbate existing socio-economic disparities. In such cases, digitalization becomes a luxury afforded only to countries with the social and economic capacities to utilize modern technologies. To avoid these issues, Chaturvedi turns his attention to institutions, the third sector and a free and independent fourth estate. To make sure digitalization follows a smooth and pragmatic course, he claims that these institutions must establish norms and guardrails for emerging technologies and digital applications. What’s more, they must make sure that they are being used responsibly to maintain and advance societal well-being. Issues regarding privacy and user-generated data should not be taken lightly. In order for digitization to truly flourish, it must operate in accordance with high standards of security, privacy and human dignity.

The topic of the conversation between Chaturvedi and E-Estonia then shifted to artificial intelligence, a telling metric of a country’s digital prowess. Chaturvedi explains that it’s become fashionable to cast the quest for AI in the mold of an arms race because of the bipolarity emerging between the Chinese state and its enterprises, which are advancing in one direction, and US-based technology companies, which are opting for a different direction. In his opinion, viewing AI in such a regard dilutes the complexity of the topic and the issues at hand. Instead, he suggests to develop a more nuanced approach to thinking about modern technologies in their larger global context. In doing so, we’d have a firmer grasp on its strengths and weaknesses as well as its potential risks and rewards.

Perhaps the most obvious result of digitalization has been the explosion in user-generated data. It seems as though everything we do– from the mundane to the involved– leaves a digital trace. Because of the fact, it’s become increasingly important for businesses, governments and the global market to make sure this important resource is being used effectively. User-generated data is often compared to oil because of its influence on global economics, but Chaturvedi is quick to express his apprehensions at drawing such conclusions. In his opinion, the idea that data is the “new oil” is not helpful, nor is it accurate. Data has multiple uses whereas oil is a one-and-done kind of deal– you burn it and it’s gone. Data, on the other hand, leaves behind a valuable record that can be measured to create important insights. Unlike oil, data is a gift that keeps on giving.

It’s clear that the data economy isn’t going to slow down anytime soon. To make sure digitalization is a tool for the greater good, a high level of transparency, cooperation and regard for human dignity must be maintained. The opportunities arising out of modern technologies is endless, and moreover, its power is unavoidable.

Let’s bring our attention back to the question at the beginning of this article: Is digitalization the new version of the space-race?

The space-race of the Cold War had one definitive winner and, as such things go, one subsequent “loser”. While Cold War tensions eventually dampened in the 1970’s, thanks in part to the illustrious “handshake in space” between US and Soviet-Union astronauts, its legacy remains clouded in global anxiety. If digitalization represents anything close to the space-race, Chaturvedi’s advice is to begin with a “handshake in cyberspace”.

Read Ravi Chaturvedi’s entire interview with E-Estonia here and take a look at IBGC’s work on the emerging digital economy.