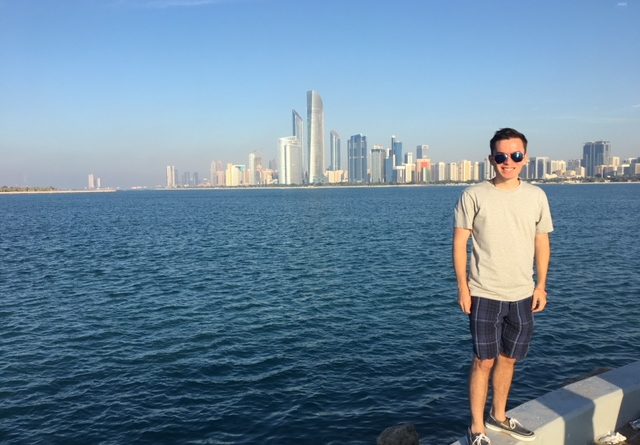 During the Summer of 2018, Kevin Dupont (MALD F’19) took a unique approach to examining global business in the Arabian Gulf by offering a cost-benefit analysis and national strategy for businesses wishing to enter the region. His research aimed to create a security/risk analysis for business actors in the State of Qatar, the United Arab Emirates and their respective regional affiliates. Kevin’s research was made possible by IBGC’s Experiential Learning Fund, which gives students the opportunity to use their contextual knowledge of business around the globe.

Please allow me to introduce myself – I am a rising second-year Master of Arts in Law & Diplomacy (MALD) student at the Fletcher School, studying International Security and International Business Relations. I received my undergraduate degrees from Brandeis University (2016) in International Studies and Anthropology.

This summer, I conducted research into the corporate and security environments of the Arabian Gulf, with a particular focus on the United Arab Emirates (UAE) and Qatar. For those who may not be as familiar with the region, the Arabian Gulf states (also known as GCC states, which stands for Gulf Cooperation Council) had a seismic shift in June of 2017 as the group of Bahrain, the UAE and Saudi Arabia effectively exiled nearby Qatar from their former alliance. This was done because the Saudi Arabia-led group determined that Qatar was funding terrorists in order to achieve some kind of regional security. While this reasoning has been thoroughly challenged, the diplomatic crisis remains, one year later.

What makes this crisis an “actual crisis”?

My research is particularly relevant as the diplomatic crisis continues into its second year. Corporations that operate in the region have faced difficult decisions, either to conduct their affairs within the Saudi-bloc or in Qatar. While most have been able to navigate the waters of the current political scene, many firms still have to hide their Qatari affairs from the Saudis and Emiratis. For example, a multinational company that conducts some of its work in Qatar must route all of its correspondence through its European office, so that it cannot be traced from the UAE to its recipient in Qatar.

Politics and business are always going to be intertwined. However, this region (and perhaps the Middle East as a whole) has one timeless political and business tactic that has remained since the early merchant times of the Prophet Muhammad (Peace Be Upon Him).

For those who may not be familiar with the history of Islam, the Prophet was a merchant in Mecca during the initial years of the faith. The spread of Islam was originally seen in the merchant community, with followers of the faith allowing the words and teachings to spread across then-Arabia and out to the rest of the world.

The modern-day merchant society is now a bit more internationally-minded and focused on much different affairs than ancient Arabia, but the roots of business and politics in this region are ultimately engrained in Islamic teachings and will continue to be for the future. Business networks in this region are still connected by families that have been in the Arabian Gulf region for hundreds of years, with the idea of a monarchy in the form of royal families continuing to remain a prominent political system. Eventually, these became the ruling families of Saudi Arabia, Qatar, Bahrain, the UAE and Oman, with the Al-Saud (Saudi Arabia) and Al-Nahyan (UAE) being two of the more prominent political figures in recent years. However despite its young age of 47, the UAE remains a prominent figure in the global political system as a highly-regarded representative to one of the most politically uncertain regions of the globe.

Understanding the corporate environment of the GCC states comes with having a sense of these family-focused frameworks wrapped in religious teachings and values. The budding field of Islamic Finance has been particularly effective in understanding this balance.

I arrived to find a Qatar that was buzzing with excitement as the World Cup was reaching its latter stages and eyes were beginning to turn to Qatar 2022, when Doha will host the major sporting event. The reason why I bring this up is important, as the corporate environment that is unique to Doha is about to get a metaphorical jolt (or so one would think), ahead of the 2022 event.

Business leaders throughout the city are excited for their upcoming prospects, especially those in the transportation, construction and lodging industries, as a new Metro line, enhanced public transportation, service to roads, as well as much needed updates to hotels and apartment buildings around the city call for a major public works overhaul in the next two or three years.
Business leaders of top Qatari firms noted that while there has been a slight decrease in operations around the GCC neighborhood, operations in Europe have soared and Qatar remains primed for a major presence on the international stage in some lesser known fields, including that of higher education, banking, Islamic Finance, the arts and culture.

I find that while the rift in the region is likely to remain in place for the foreseeable future, Qatar has handled the division more effectively. The Qataris have seen strengthened relations with nearby Iran and Turkey, while maintaining the country’s strong business hub for international players. The rift was originally put in place to halt the development of Qatar, but it has perhaps given the country more attention than restricting its ability to move forward.