The following link will take you to the brand new CNC Router page on the Bray Lab website: https://sites.tufts.edu/bray/theshop/shopbot-cnc-router/

By combining the detailed information from the CNC Router’s google site with tips and tricks I have learned over the past few weeks working with the machine, I was able to organize the information and present it in a user-friendly manner.  Many photos and diagrams, like the one pictured below, were included to help new and returning users locate obscure buttons and commands. 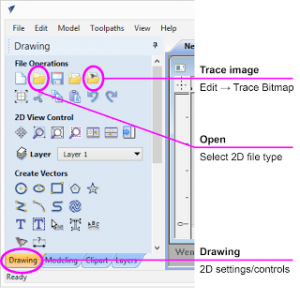 While trying to explain a chain of commands in writing can be precise and descriptive, pictures help break up the text and make the text clearer. All of the information on the Shopbot CNC Router was split up into different sub pages, to help locate information more quickly. If a user just wanted a refresher on what each kind of toolpath did, they could simply click on the ‘ShopBot File Setup’ page and skip to the ‘Toolpathing’ section.

With the new section of the website completed, it was back to the coffee table. For the past couple weeks, I have been trying to find a method that would allow me to create a topographic .STL file of the Tufts University, Medford campus. My first google search brought me to a website called “Terrain 2 STL” which, as the name suggests, creates an STL file of whatever land you section off in a Google Maps window. However, the smallest size you could make the selection window included sections of Medford, Somerville, Cambridge, and Arlington, making it very difficult to decipher which large bump on the map was Tufts. With that option exhausted, I researched other methods of generating .STL files of land. One of the methods I found suggested creating a .TXT file with the latitude, longitude, and elevation coordinates of various point round Tufts and importing them into Solidworks to make a “point cloud.” While the Youtube tutorial of this process created a clear, smooth solid of the terrain, I was left with hundreds of triangles that produced a stalagmite-looking object. I scoured Solidworks forums and maker space blogs searching for a way to create this file, and clearly I was not the only person eager to 3D print or CNC their own topography. Thankfully, this morning a new method involving Google Maps and SketchUp was suggested to me. With some quick internet searching, I found this tutorial, followed along with only a few hiccups, and was able to generate an accurate, detailed .STL file of Tufts.

Since the model will be about 24″x36″x4″, it will need to be cut in sections on the ShopBot CNC Router. Autodesk’s 123D Make is a versatile CAD software that will slice a 3D model using various slicing techniques.

In the upcoming week, I hope to start practicing making this piece on the XPS foam, finding the optimum slicing technique, and researching more joinery methods with which to assemble the table!