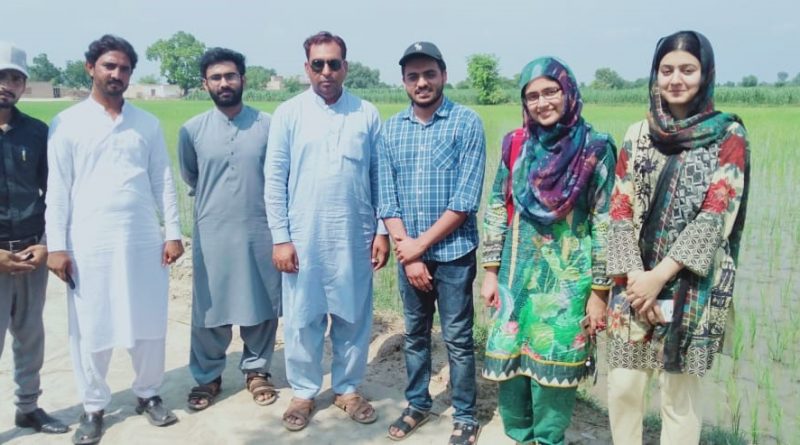 Over the summer of August 2019, Mohammad Uzair Akram (MIB ’20) tested the feasibility of an asset-based financial product he created called Kisaan in the suburbs of Lahore, Pakistan. Kisaan is designed to help Pakistani farmers by offering flexible repayment schedules, opportunities to share the risk of new investments, and by adhering to Islamic financial norms. Being one of the first MIB students and Pakistanis to place in the Tufts 100K New Ventures Competition, Uzair applied for an IBGC research grant for additional support to conduct his research. With temperatures in Pakistan reaching a scorching 104 degrees Farenheit, Uzair traveled to the outskirts of Lahore City with his team of research assistants to identify, interview, and study farmers’ financial constraints.

Kisaan, which means farmer in the Urdu language, is a proposed microfinance product aimed at incentivizing farmers to buy agricultural inputs such as tractors and solar-powered irrigation pumps. Uzair partnered with Pakistan’s largest microfinance organization Akhuwat and utilized its database, distribution network, and manpower.

For Uzair’s sample population, he and his team co-ordinated with Akhuwat, which has a vast network of farmers across Pakistan. From the given pool of existing clients of Akhuwat, farmers with land ownership of less than five acres were identified and selected for conducting surveys. The reason behind choosing this sample was to limit their research to small-scale farmers who weren’t able to meet their agricultural needs and rely on small-scale loans from informal means such as Arhtis (local moneylenders). The team divided the sample into three main categories: 1. Individual, 2. Focus groups comprising 10 and 20 male farmers each and 3. Focus group of female farmers.

In order to communicate effectively with farmers and to clearly asses their needs, Uzair and his team designed a survey that focused on their general information, their willingness to use Kisaan, and the capacity constraints. The methodology involved the collection of quantitative and qualitative data; Uzair recorded the conversations we had with our sample population and then we transcribed the audio recordings. One of the key questions in Uzair’s survey was to assess the prior knowledge of farmers about the Islamic Finance System and Kisaan in general. After receiving the response in a simple Yes or No, the research team explained to them the general application of Kisaan. The main objective of explaining the concept of Kisaan was based on the notion that almost every farmer had no prior knowledge of it, and most importantly to check the feasibility of any such program based on the Islamic finance system.

As far as individual surveys are concerned, the farmers showed some reservations while answering the survey questions. Given the local dynamics of the community, the focus groups were more useful as farmers spoke candidly about the problems they face related to agriculture and how much they were eager to participate in a program based on the Islamic finance system. Of the focus groups, one group consisted of female members of the farming community. This focus group was crucial for the research considering the potential of women in the country’s agriculture sector.

Microfinance crediting based on Islamic finance laws has a huge potential for increasing agricultural productivity and social well-being of small-scale farmers in Pakistan. Solar water pumps and tractors were identified to be crucial for decreasing the cultivation cost incurred during a single season. Applying the Kisaan model –based on Masharika– for providing such products on loans will ultimately modernize the agricultural practices in the Punjab province of Pakistan.

Having presented Kisaan and winning several social entrepreneurship competitions such as Tufts 100k, Uzair sought the IBGC research grant because it enabled him to prepare surveys, identify potential clients (smallholder), and conduct field research in some of the remotest villages in Punjab Province, Pakistan.