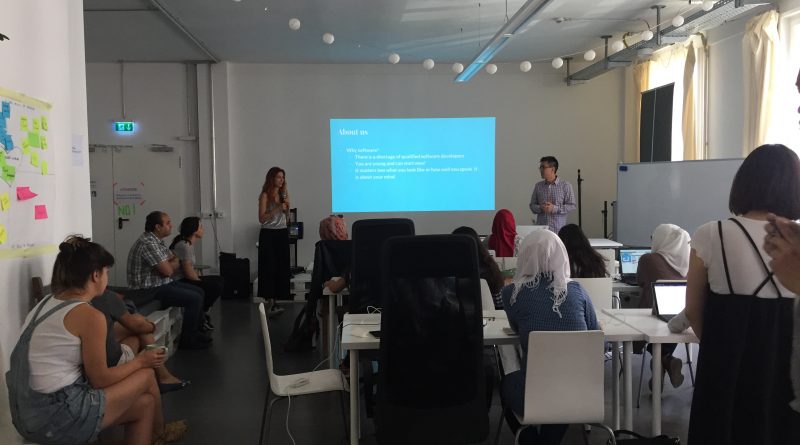 As part of my research on civil society-led efforts towards refugee integration in Germany supported by IBGC, I traveled to Berlin to speak to several organisations, journalists and government officials. Berlin, being Europe’s tech hub, has seen a surge in tech projects since the beginning of Europe’s refugee “crisis” in 2015. Below is a profile of one such organisation that has been successful in its efforts to reach out to refugees and collaborating with actors from the public and private sector.

On a warm Saturday morning in July, I found myself in a coding class in Berlin surrounded by 15-20 teenage girls. A software engineer from Microsoft is leading the class. He speaks of the importance of coding and the gap in skilled professionals, particularly women, in the tech industry. As he speaks, a volunteer translates his English instructions to German, eliciting nods and questions from the students.

It’s the last class of a semester-long program for young women run by the ReDI School for Digital Integration, a non-profit school providing free coding and digital courses for migrants and refugees in Berlin. Started in 2015 at the peak of the refugee influx in Europe, the school aims to help newcomers integrate more easily into Berlin. It was founded by Anne jær Riechert in 2015 after her conversation with an Iraqi software developer in a refugee camp in Berlin. The ReDI School founds its roots in the recognition of the potential and talent that refugees brought with them along with the largely vacant spots in the German tech industry.

In addition to several three month-long digital programs, students at ReDI are introduced to a strong network of tech professionals, mentors and alumni. Edlira Kasaj, who heads the Digital Women Program at the ReDI school tells me that co-creation is one of the guiding principles of the school. “By organizing networking and mentoring events along with providing a co-working space for alumni, tech professionals and students, the school brings together people from different backgrounds to come up with innovative solutions to complex problems”, Kasaj says.

The ReDI school’s model is also one that keeps innovating: The recently-launched Digital Women Program being an excellent example. While the school received a lot of positive feedback and support for its regular coding programs, the team at ReDI found that they were hardly any women in these programs. “To be truly inclusive, we needed to reach out to everyone and not leave women behind,” says Kasaj. After a lot of research involving interviews with refugee families and feedback discussions, the team came up with three findings. The regular classes ran from 7 to 9 in the evenings. For many women, this wasn’t a suitable time to be away from home either because they had responsibilities at home or they weren’t comfortable being out so late. Secondly, they found that many women who wanted to attend these classes couldn’t because they had children to look after. Thirdly, they found that the level of know-how among women was much lower compared to the men: many of them didn’t speak English, and had less access to digital resources than their male counterparts.

With this understanding, the Digital Women program was launched. With classes running on Saturday mornings with on-site childcare facilities, more women were encouraged to sign up. The medium of instruction was German, which newcomers were already learning as part of the resettlement process in Berlin. Further, the ReDI team decided to offer courses appealing to different levels of digital literacy including basic computer skills, coding, cyber security and e-commerce classes.

A majority of the ReDI students are from Syria. While a considerable number are from Iraq and Afghanistan, there are very few students from sub-Saharan Africa. The team at ReDI are constantly working on the diversity of the cohorts by reaching out to more communities. Many of the graduates of the ReDI School have gone on to pursue internships and jobs with tech companies. Much of the school’s support has come from the private sector in Germany. In addition to receiving financial support from companies like Microsoft, Cisco and Klöckner & Co, they have also entered into a number of corporate partnerships. The teachers who volunteer at the school are mostly from startups and tech companies and the number of volunteers have only been increasing. IT companies have been open to sponsoring events and having students over for site visits. I’m told that the ideal goal for financial stability is to be accredited by the German employment agencies so as to be official providers of vocational training for migrants. However, given the bureaucracy involved, this remains a distance goal.

Despite these funding challenges, the ReDI school has been successful in its mission and reach owing to its strong volunteer community. They are now expanding to Munich upon being invited by the local government there. Through the school’s role as a springboard for migrants and refugees to either go on to find jobs, study further or launch their own start-up, it has clearly established a model for integration through technology.