After a long summer of brainstorming, ideating, prototyping, and revising, the picture frame is finally ready for deployment in the shop. Last week’s “wrap-up” frame design prompted the comment that most people print 4×6 pictures, not 5×7, leading to some quick dimension changes and the construction of a final prototype. This new frame holds 4×6 pictures snugly (a practical, appealing function), takes about 2 hours to make under ideal circumstances (commensurate with the wall hook), and lowers the cost by almost a dollar, down to $5.02 per frame (coverable by a small lab fee, as discussed in last week’s post). 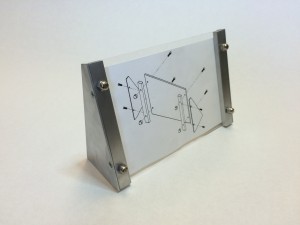 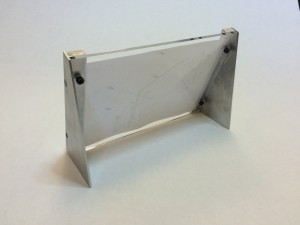 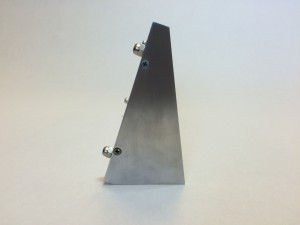 As of now, the picture frame is officially a training option for those looking to use the yellow zone tools. All of this project’s goals were met successfully: the frame adds interest to the project, covers every tool in the yellow zone and incorporates some from outside, and is easily manufacturable by those new to the shop. With luck, these frames will soon grace shelves all across engineering dorm rooms at Tufts. 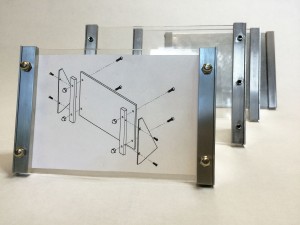 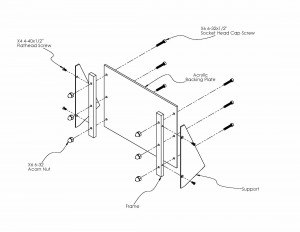 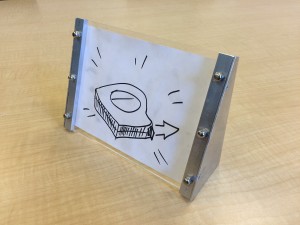 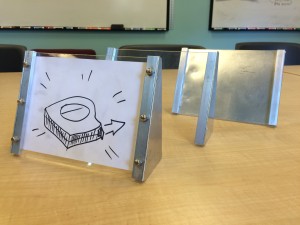 This week saw great leaps forward on the picture frame, but ultimately proved something of a disappointment. The great leaps: a new design and two prototypes! The drawings showcased in last week’s post were prototyped, resulting in a proof-of-concept model that actually worked fairly well. 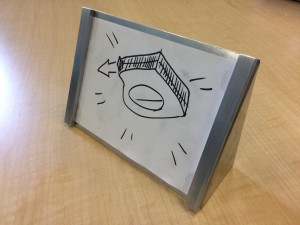 This design did turn out to have some issues, however. Most notably, it proved much more difficult than anticipated to accurately bend the frame’s aluminum legs; additionally, the bending process slightly warped the frame’s center sheet, preventing the picture from laying flat.

These considerations—difficulty bending and a warped image support—led to picture frame, rev. B, the designs for which are shown below. It replaces the single bent aluminum sheet frame with two aluminum sheet legs that are screwed into the vertical picture clamps, with the picture backed by a 1/8″ acrylic sheet. 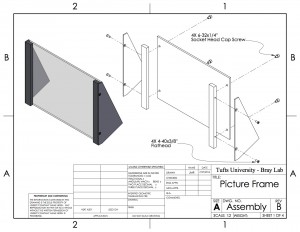 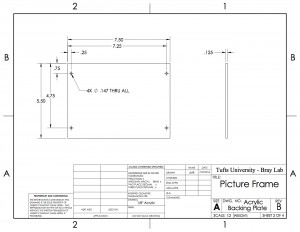 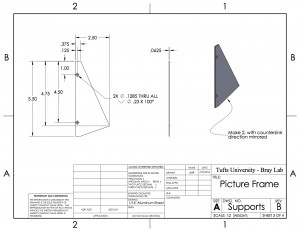 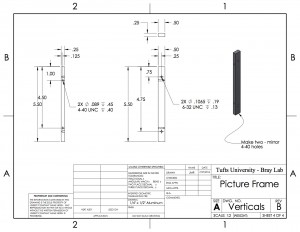 As this design did not include any sheet bending, it proved much easier to build using only the tools currently in the yellow zone than the initial design. This new design was prototyped as well: 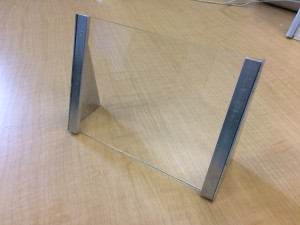 As suspected, the new design proved much simpler to build. However, I still believe it fails on two counts. First, it incorporates two tools that are not used in the wall hook: the laser cutter (to cut the acrylic), and the hand drill (to drill the holes in the leg plates). Second, and more important, this design costs over $7 in raw materials, several cents more than the initial design and far more than the $0.50 wall hook. As such, if we were to proceed with this design, we might need to incorporate a “pay-to-play” model, where the wall hook is the default option, but students can pay a materials fee to make something larger.

One of the leading contenders for new shop training project was a picture frame. These drawings are a first pass at designing a picture frame that could be built with the yellow zone tools. It consists of a bent aluminum sheet frame with two aluminum bar stock supports on the front; the picture is inserted by sliding it under the supports and then tightening them down to secure it.

Cost will possibly be a major issue with this design, with initial estimates putting it at more than 8 times more expensive than the wall hook. This extra cost is mostly incurred due to the expense of aluminum sheets, so next steps are to brainstorm ways to cut down on sheet stock usage and then start prototyping. 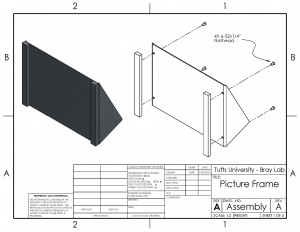 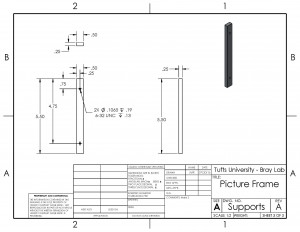 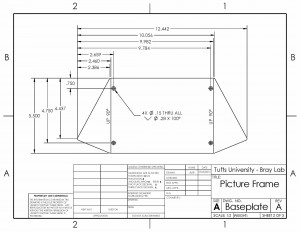