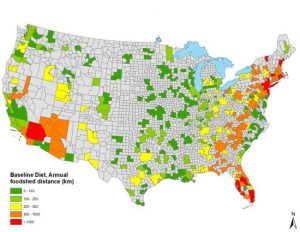 A new study from researchers at the Friedman School asks which US cities could potentially feed themselves with food produced within about 150 miles.

It’s a good starting-point for a very complicated calculus. It raises questions about what people would–and perhaps should–be eating (the study considered seven different types from the meat-heavy “Standard American Diet” to a vegan diet) and what kind of cultivation and places are considered “agricultural.” The study doesn’t seem to incorporate the kinds of very small-scale and non-land-intensive types of production we increasingly see in urban and peri-urban places, which can fill important niches for many kinds of urban eaters.

So like all broad-brush studies of the US food system, this one invites a lot of further thought. Eaters and planners in the northeast, though, should definitely be taking note!