We’re rapidly approaching the one-year post-Fletcher mark for the graduates in the Class of 2014.  Today we meet Julia Leis, whose path from pre-Fletcher to her current location involved several countries on three continents.  Julia used her time at Fletcher to develop her interests and explore new areas, resulting in the perfect job that weaves everything together. 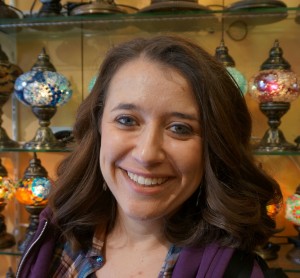 While working at an agricultural school for Burmese youth in northern Thailand in March 2011, I confronted two major decisions: 1) which career/life path to choose; and 2) whether to return to the U.S. that August.  I knew I wanted to continue my education and, while my undergraduate studies at Georgetown’s School of Foreign Service had prepared me well in international relations, picking the right graduate program was a challenge.

The decision was complicated because I felt I had too many interests.  Urban planning, social enterprise, natural resource management, and public policy all fascinated me, as each area incorporated my previous work experience and passions.  In addition to these interests, I knew I wanted a graduate school with an international focus on development.  Thanks to mentors and supportive family back home in Chicago — and a Fletcher student, who I found through the Fletcher Admissions Blog and who Skyped with me while I was in Thailand — I found the ideal place, where I would have the flexibility and support to pursue multiple avenues of interest: The Fletcher School.

Now, four years after I considered my future plans, I can happily report that enrolling at Fletcher was the best decision I ever could have made.  Not only did I find an incredible group of friends and peers at Fletcher, but I was able to pursue all of my interests in various capacities through courses, by organizing conferences, and in research assistant positions.

The sense of community that I found at Fletcher from the first day was unparalleled.  The first weeks of school were both exciting and overwhelming, as I struggled to find the right balance between building off my previous background and exploring new subject areas.  By the end of my first year, while I knew I wanted to pursue a career abroad, I did not know in what capacity.

In between my first and my second year at Fletcher, I was able to pursue an internship with Millennium Challenge Corporation in Ouagadougou, Burkina Faso, working on agricultural development, M&E, and land tenure reform projects, which allowed me to broaden my development skill set while working in a French-speaking context.

In my second year at Fletcher, I cross-registered for a course at the Harvard Graduate School of Design, under Visiting Professor David Sanderson, called Design for Urban Disaster.  This course, along with Field Studies in Global Consulting with Prof. Rusty Tunnard, reignited my interests in complex urban issues, resilience, and human-centered design, and I considered more seriously pursuing a career in humanitarian response.  With the support of Prof. Tunnard, I also self-designed a Field of Study in international urban planning and development.  In January 2014, I joined a graduate school field trip with Prof. Sanderson to Léogâne, Haiti, to conduct a participatory evaluation on transitional shelters.

In preparing for life post-Fletcher, I attended an Office of Career Services information session with Catholic Relief Services (CRS) in the fall semester of my second year, and I decided to apply to their International Development Fellows Program (IDFP).  My interest in the IDFP was further solidified by courses such as Essentials of Humanitarian Action and Gender, Culture, and Conflict in Complex Humanitarian Emergencies with Prof. Dyan Mazurana and Prof. Elizabeth Stites.

CRS selects approximately 20 IDFP fellows each year, and places them across CRS country programs in Africa, the Middle East, South East Asia, and Central America.  I discovered that at least one Fletcher student had done the IDFP each year prior to me in places such as Haiti, Kenya, and Jerusalem/West Bank/Gaza.  I was able to connect with these talented alumni, who highlighted what an excellent opportunity the IDFP offered to pursue a humanitarian career abroad, as a majority of fellows will, after nine to ten months, transition to program manager positions within CRS.  I knew that the IDFP would allow me the chance to work closely with communities and partners at the local level, and with an organization I deeply respected.  I was fortunate to be selected and offered a position with the CRS Philippines country program in early May, and my posting was scheduled to begin in September 2014.

As I graduated in May 2014, I needed to find summer employment to get me through to September.  Again, Fletcher provided me and other students with an excellent opportunity to conduct field research related to topics that interested us.  I joined my phenomenally talented research partner Anisha Baghudana (MIB ’15) in Nairobi, Kenya as Junior Research Fellows with the Institute for Business in the Global Context and MasterCard Worldwide.  We completed a qualitative study on how digital innovation is improving urban mobility in Nairobi.  Connecting with Nairobi’s tech and start-up community provided an exciting glimpse into how entrepreneurs are creating solutions to solve some of Nairobi’s biggest urban transport challenges, including traffic congestion, poor road quality, and safety and security for passengers and pedestrians.

In my current position as a CRS fellow in the Philippines, where CRS has been working since 1945, I have worked with exceptionally talented Filipino and international colleagues in Manila, Davao, and Tacloban City.  In Eastern Leyte and Samar, CRS is responding with Shelter, WASH, and Livelihoods programming after Super Typhoon Yolanda devastated the area in November 2013.  I’ve supported multiple projects, including an urban disaster risk reduction program called SUCCESS (Strengthening Urban Communities Capacity to Endure Severe Shocks) in Metro Manila, and the December 2014 Typhoon Hagupit emergency response in Eastern Samar.  My training from the class on Essentials of Humanitarian Action proved extremely useful and applicable, as I helped with shelter and WASH kit distribution in affected communities, wrote situation reports, and attended coordination meetings with local government agencies and UNOCHA.

Like Hanneke, while I dearly miss my family back in Chicago and my Fletcher family, I never cease to be amazed at how close we remain.  Despite being in vastly distant locations now, such as South Sudan, Washington, DC, Uganda, Nepal, Guatemala, and Boston, we support each other in any way we can, especially as the transition after grad school is not always a smooth one.  They have supported me through countless Skype calls, and even with a month-long visit to the Philippines.  It is this unique network of support that so attracted me to Fletcher in the first place, and I know that it will remain with me for years to come.