At Fletcher, we refer to International Security Studies in two ways.  First, as the Field of Study that is among the most commonly pursued by students.  Second, for the International Security Studies Program, which offers extremely robust programming throughout the year.  Despite the important place that Security Studies (in both its meanings) occupies at Fletcher, I have not always done my part in spreading the word.  Making up for that lapse is going to be a focus of my blog work for 2015-16, and there’s no time like the present to start.  To do so, I reached out to my old friends, Prof. Shultz and Prof. Pfaltzgraff to ask for information.  It happened they had just completed a report for one of the organizations that funds their work (and that of many master’s-level and PhD students).  Today, I’m going to share excerpts of that report.  This is a long post, but the extra length is needed to capture the broad scope of ISSP activites.

With the beginning of 2015-16, the International Security Studies Program (ISSP) will enter its 45th year at The Fletcher School, and International Security Studies remains at the cutting edge of The Fletcher School’s multidisciplinary curriculum.  Through its many graduates and other efforts, ISSP has a major impact in shaping strategic thought and analysis in and beyond the political-military affairs community.  Many ISSP graduates have gone on to important positions of responsibility in the United States and abroad, including General Joseph Dunford, incoming Chairman of the Joint Chiefs of Staff and currently Commandant of the U.S. Marine Corps.

ISSP offers a range of courses that examine conflict and war; strategy and statecraft; crisis management; regional security; intelligence; homeland security; proliferation; national security decision making; and terrorism.  Our courses are theoretical and policy-oriented, as well as historical and contemporary, and reflect and anticipate a rapidly changing security environment, while providing instruction on the basic and timeless issues of strategy, statecraft, conflict, and war.  During the 2014-2015 academic year, seventeen courses were offered in International Security Studies or closely related areas including: The Role of Force in International Politics, International Humanitarian Law; Internal Conflicts and War; Proliferation-Counterproliferation and Homeland Security Issues; The Evolution of Grand Strategy; Foundations of International Cybersecurity; The Strategic Dimensions of China’s Rise; Modern Terrorism and Counter-Terrorism; Peace Operations; Foreign Relations and National Security Law.  In support of our curriculum, ISSP sponsors a high-level guest lecture series, an annual conference, a colloquium series, a crisis simulation exercise, and occasional field trips.

During the 2014-2015 academic year nine mid-level officers were assigned to the ISSP in lieu of spending a year at one of the various service War Colleges.  This year’s group included two Air Force, one Navy, four Army, and one National Guard officer, and one senior official from the U.S. Department of Veterans Affairs.  The mid-career military fellows, who pursue special research projects at Fletcher, bring an unusual set of experiences, expertise, and knowledge that adds greatly to our curriculum.

“Outside the Classroom” Educational Programs

Beyond its course offerings, the ISSP sponsors various “outside-the-classroom” activities designed to enrich the education of our students by addressing the emerging issues of 21st century international security.

Central to our programmatic activities are high-level conferences.  These conferences help to publicize the Security Studies field in the broader national security/foreign policy communities.  This year the Institute for Foreign Policy Analysis (IFPA) and ISSP joined together to organize and facilitate “Symposium on New Dynamics in Japanese Security Policy,” a one-day symposium at Fletcher to promote an informed exchange of views on the new dynamics of Japan’s security policy and their implications for U.S.-Japanese strategic cooperation going forward.

The symposium provided a unique opportunity for a select group of Japanese and American policy experts, academics, business leaders, and officials to review and explain in some depth key aspects of the Abe administration’s defense and foreign policy reforms aimed at facilitating Japan’s emergence as a “proactive contributor to peace” at both the regional and global levels.  The Honorable Hideshi Tokuchi, F86, Vice Minister for International Affairs at Japan’s Ministry of Defense, was the keynote speaker for the luncheon.

Each year, as part of the seminar on Crisis Management and Complex Emergencies, ISSP includes a weekend crisis simulation exercise.  The 40th anniversary of SIMULEX event was held on November 7-8, 2014 and had more than 160 participants from The Fletcher School and the outside community.  The scenario was entitled “Baltic Crisis and a Chaotic Middle East.”

Lectures by outside experts on topics related to international security remain an important dimension of ISSP.  These presentations, usually in a luncheon/lecture setting, take place throughout the academic year.  Our objective is to draw speakers from a broad cross-section of the professional civilian and military communities, and to design the lecture format in such a way as to give our students maximum opportunity to meet with such experts.  Among the speakers sponsored by the ISSP during the 2014-2015 academic year were:

Dr. Robert Legvold, Visiting Professor, The Fletcher School, and Marshall D. Shulman Professor Emeritus, Department of Political Science, Columbia University: Perspectives on U.S.–Russian Relations.
Dr. Kostas A. Lavdas is Professor of Hellenic and European Studies, The Fletcher School, and Professor of European Politics and Director of the Centre for Political Research and Documentation (KEPET) at the University of Crete: A Transatlantic Relationship for the 21st Century: Advancing Collective Security through Complementarity and Effective Burden Sharing.
Dr. Sung-yoon Lee, F94, F98, is the Kim Koo-Korea Foundation Professor of Korean Studies, and Assistant Professor, The Fletcher School: Five Myths about North Korea.

With support from several external foundations and fellowships, during the 2014-2015 academic year, ISSP granted tuition assistance and research support to a total of 39 master’s-level and PhD students, along with support for two student-organized academic activities. 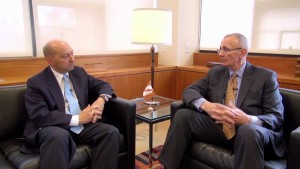 ISSP has also added to its core faculty a new Professor of Practice, Michelle Malvesti, F00. Professor Malvesti worked for several years in the U.S. Intelligence Community as a Middle East terrorism analyst at the Joint Special Operations Command and the Defense Intelligence Agency.  More recently her government service included Senior Director for Combating Terrorism Strategy for the Directorate for Combating Terrorism in the National Security Council, where she advised President Bush and his administration on US counterterrorism policy and strategy.  During the Obama Administration she co-chaired the Presidential study review that reformed the White House organization for homeland security and counter terrorism.