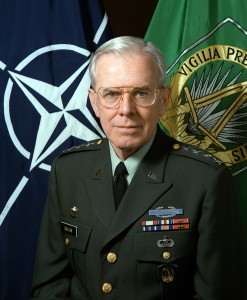 My career has been unusual in that, though I’m employed by neither the military nor the Foreign Service, I have worked for two past NATO Supreme Allied Commanders and one former ambassador.  The second of the former NATO leaders is our current dean, James Stavridis, who made the community aware of the recent passing of his predecessor in both posts, Jack Galvin.  In an email, Dean Stavridis noted:

As The Fletcher School’s forward-looking and innovative leader from 1995-2000, Jack and his legacy are woven into the fabric of the school: he prompted Fletcher’s expanded focus on global business; he established a joint master’s degree in humanitarian assistance between Fletcher and the Friedman School of Nutrition; he oversaw the development of the school’s signature internet-mediated degree program for mid career professionals (GMAP); and he inspired the Institute for Human Security.

As our former Board of Overseers chair, Peter Ackerman, noted back in 2002 at a ceremony for the unveiling of the portrait of Dean Galvin that now hangs in the Ginn Library, “Jack was determined to make Fletcher a better place.  He restructured the school for a post-Cold War environment.  He put a new stamp on Fletcher and was up for any idea that was different, that would make Fletcher fly.”

While the Fletcher community mourns the passing of a great Dean, the rest of the world of course will remember General Galvin for his lifetime of service to the U.S. and its allies, capping a 44-year career in the Army with a 5-year term as Supreme Allied Commander at NATO.  As noted in the Washington Post, General Galvin was known widely as a “prototypical warrior-intellectual,” for his love of literature, commitment to academic scholarship, and mentorship to future leaders.

Many major publications, including The New York Times have run obituaries, and I will leave it to readers to learn more about his interesting career.  Instead I wanted to share a personal observation of his kindness.

Back in about 1997, well before I worked in the Admissions Office, a student working with me, Anthony, became very ill.  For a short but intensely worrisome time, his illness was a mystery.  When it was finally diagnosed — a severe case of encephalitis, contracted during his winter break in California — the information was not at all reassuring.  Fortunately, following an extended hospital stay, Anthony recovered and went on to graduate.

Where does Dean Galvin come into all this?  At the time, he was living in a Tufts-owned house with a small attached apartment.  Dean Galvin and his wife, Ginny, offered the apartment to Anthony’s father, who came to the area and stayed for many weeks until Anthony went from hospital, to rehabilitation facility, to the apartment, and finally back home.  I spent some time with Anthony’s dad, and he was incredibly grateful for the kindness and support that Dean Galvin and Ginny Galvin showed to him.  I remember thinking at the time that the extent of the dean’s support went beyond the requirements of his position, and reflected the type of care that a general might provide to the officers and soldiers under his command.

Jack Galvin was a very special individual and an interesting dean for The Fletcher School.  The School, in its current form, owes much to his leadership.