Our next post in the Faculty Spotlight series comes from Andrew Hess, Professor of Diplomacy and Director of the Southwest-Central Asia and Islamic Civilization Program.  Professor Hess currently teaches Southwest Asia: History, Culture, and Politics, The Globalization of Politics and Culture for Iran, Afghanistan and Pakistan, and The Globalization of Central Asia and the Caucasus.  In his post, Professor Hess describes the curriculum changes he has needed to make to keep his courses current. 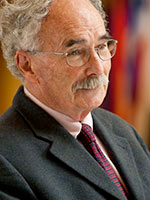 The courses I offer in the fall semester deal with an explosion of complex conflicts from Eastern Europe to China.  Happily this should improve employment opportunities for future diplomats!  But the down side of all this violent activity means I need to constantly adjust course curricula.

In the interest of keeping up with all the turmoil, I am going to describe the additions to our previous semesters’ battles by trying to understand radical change in Iran, Afghanistan and Pakistan and the emerging nation states along the southern edge of the former Soviet Union.  I, however, offer no guarantee on including all that may happen in Southwest and Central Eurasia: I find this region has indeed earned its reputation for being a land of unpredictability.

Diplomacy 265 (The Globalization of Politics and Culture for Iran, Afghanistan and Pakistan) was originally dedicated to understanding the international and internal politics related to key diplomatic issues of the three non-Arabic language speaking nation states east of Iraq, south of Central Asia and west of India. Alas, the power of twenty-first century global change makes it ever more difficult to explain what is happening in this region on the basis of only a national analysis.

The big issue is: Why so much violence and so little in the way of diplomatic solutions in this huge chunk of Eurasia?  The answer is, no doubt, going to be complex; and among the various new explanations for this bleak situation I suggest that the intensified impact of three global trends in this sub-division of Southwest Asia have added to the forces of instability already underway in this strategically important portion of Eurasia.

Very briefly these “trends” are:

And while we are talking about diplomatic problems involving commerce, we should not forget that Afghanistan is probably the world’s largest producer of heroin.

The Globalization of the South Caucasus and Central Asia (Diplomacy 267) course came to the Fletcher curriculum as a response to the increasing strategic importance of this slice of Eurasia during the period of the Cold War (1953-1991).  But the politics of the old bipolar struggle in Eurasia has now been replaced by conflicts between of new nation states now emerging from within the former body of the Soviet Union and the effort of the ruling elite of the Russian Federation to restore in some fashion the prestige of the Russian state.

Meanwhile huge technological forces associated with the economic development of all of Eurasia are linking the heartland of the Continent with the global economy: starting in the last quarter of the twentieth century the almost simultaneous growth of global oil production in the Soviet Union and the transfer under European control of high level petroleum skills into the Persian/Arabian Gulf arena set the stage for the modern geo-politics of energy in Eurasia.  So the two courses (Diplomacy 265 and 267) complement each other in the sense that great and small powers have to develop policies to defend their strategic interests in the production, processing, and transportation oil and gas.

Starting last fall, I have expanded the coverage of the 267 course to include a wider range of states along the edge of the southern frontier of the former Soviet Union.  In the west, we will argue that the Russian seizure of the Crimea is part of the larger political struggle for political power in the center of Eurasia; and it is an event that should be included within the wider Eurasian geo-politics of energy (gas supply for Europe).  At the eastern edge of former Soviet frontier we need to study the diplomatic problems of Russia’s new energy relations with China, in relation to the interests of Eurasia’s Turkish speaking states and societies.  (Uyghurs!).  And of course, I have added some new material concerning the technical revolutions taking place in the petroleum sector, where the international impact is not so clear at this time.

Finally, my current research asks, what role does the sectarian dispute between the Sunni and Shi’i versions of Islam play in the contemporary politics of Southwest Asia?

Outside of the classroom, the Southwest-Central Asia and Islamic Civilization Program involves students in the selection of speakers and the generation of discussions of key events involving Southwest and Central Asia.  When there is student interest, the Program sponsors the online journal (Al Nakhlah) as an effort to encourage students to publish their research papers.  We usually employ two student editors for this project.  And the program also supports summer research efforts for those students who are in the MALD or PhD programs and are working on a topic related to the Southwest and Central Asian courses.  Last, during the fall semester, we celebrate social and cultural cohesion at an annual picnic.