There are two things I happen to like: author talks and community reading projects.  The two come together twice each year at Fletcher when we’re invited to pick up a copy of a book, read it, and then join other members of the community for a session with the author. 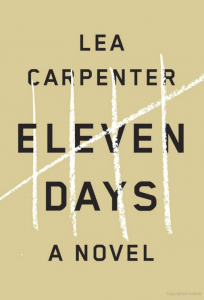 The book for the spring semester was a novel: Eleven Days by Lea Carpenter.  During the talk, moderated by Professor Dyan Mazurana, Ms. Carpenter described the origins of the book and how she conducted her research on Navy SEAL teams.  The discussion was attended by a mix of U.S. and international students, and included many current or former members of the U.S. military.

I expected that, with a diverse audience, there would be numerous different ways of engaging with the book.  I was sure that many people would have been especially drawn to the book’s topics of training and missions, while I connected much more with the story of a mother and her son.  And that’s just how it played out last night.  It was so interesting to hear the questions from the military folk, who were able to relate the plot to their own experience.

But the questions didn’t start and end with the novel’s military theme.  Some questions related directly to the writing process, and there were also a few gender-related questions around the meaning of being a “woman writer” and particularly a woman writing about the military experience, a subject generally tackled by men.

All in all, it was a totally satisfying way to experience the Fletcher community and, as our students often say about their classroom experiences, I learned as much from the audience questions as I did from the author’s answers.  There’s a lot of knowledge resident in the student community and an event like this one puts it on display.