Much as I might try, it’s hard to capture the vibrancy of the Fletcher community.  One way I’ve attempted to do so is simply by listing all the official activities taking place in a month.  Naturally, everything I’ve listed below was in addition to classes, study groups, student activity meetings, etc., etc.  In addition, as you’ll see, students were away for a week in March, shortening the list by 25% or so.  With no further ado, I hope you’ll enjoy seeing what’s been going on here this month.  (I started the list on Monday, February 29.  Leap Days are a rare enough event that including the 29th seemed reasonable.  And I included links to details when I could.)

Monday, February 29:
“Will Business Help or Hinder the Paris Climate Agreement?” A Fletcher Reads the Newspaper event, sponsored by the Center for International Business in the Global Context.

“Military 101: The U.S. Navy,” Captain James Raimondo, U.S. Navy Military Fellow, sponsored by Fletcher Students in Security — one of many events each semester that draws upon the expertise resident in the community.

Tuesday, March 1:
“The Algerian Paradigm,” a lecture by Hamou Amirouche, author and former member of the Algerian National Liberation Army, sponsored by the Fares Center. 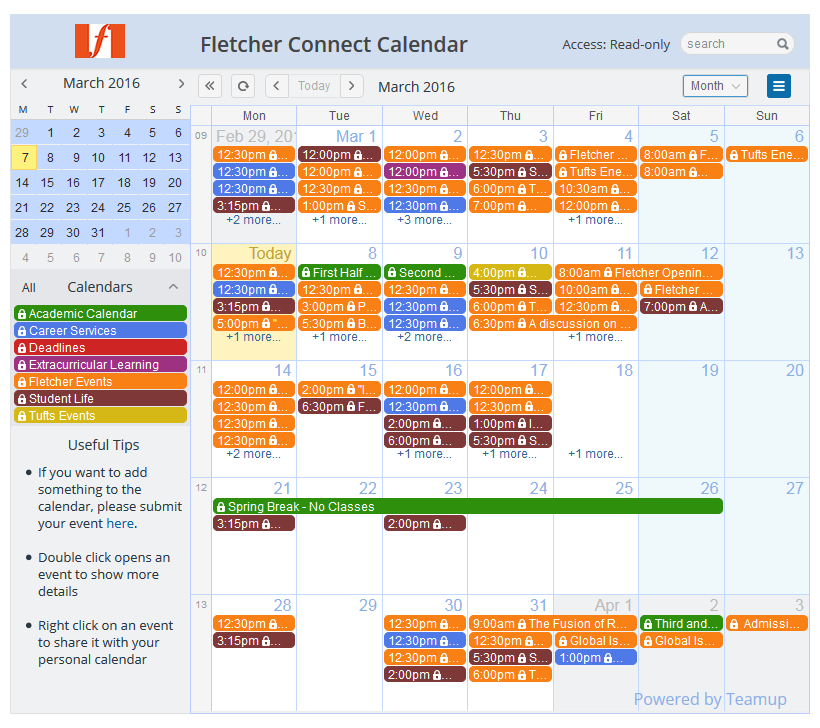 Wednesday, March 2:
“The Changing Shape of Power in National Security,” a luncheon lecture by Juan C. Zarate, chairman and co-founder of the Financial Integrity Network.

Thursday, March 3:
“Greece Pivoting on the Axis of Europe,” a lecture by Efthymios Margaritis, Captain, Hellenic Ministry of Defense, Army Corps of Engineers (and a current Fletcher MA student), sponsored by the Fares Center.

“The Inanity of Infinity,” with Abhishek Maity, MALD ’16, second in this semester’s “The Beauty of Mathematics” series.  Abhishek offered his math series last semester, too.  Who would have guessed that advanced mathematical concepts are what was missing from students’ lives?

Monday, March 7:
“Impact or Investing: Is there a choice to make?” A lecture by Greg Neichin, director of Ceniarth.

“Tel Aviv Nightclubs and West Bank Checkpoints: The Politics of Being Fabulous in the Holy Land,” a conversation and Q&A with Sa’ed Adel Atshan, Visiting Assistant Professor of Peace and Conflict Studies at Swarthmore College, sponsored by the Fares Center for Eastern Mediterranean Studies, Fletcher LGBTQA, the Gender Initiative, and Fletcher Global Women.

Pizza and a movie.  The Fletcher Africana Club and Educators in International Affairs will screen the film, “The First Grader,” and will be joined by Carol Yu, Associate Director of Teacher Evaluation and Selection at Bridge International Academies, which works in Africa to deliver high quality, low cost education.  A perfect evening activity.

“Obama’s Legacy in the Middle East for the Next President,” a lecture by William B. Quandt, Edward R. Stettinius Chair (Emeritus), Department of Politics, University of Virginia, sponsored by the Fletcher Seminar on International Conflict.

Join Ginn Library in celebrating the re-opening of the Fletcher Perspectives Gallery with a new exhibit of selected photography from the Fletcher student community.  The current exhibit, co-curated with David Gilmore (MALD ’16), features 14 thematic images from six photographers, highlighting architecture and skylines from Montreal to Morocco.

Thursday, March 10:
“Civil Disobedience Across the Americas: From Selma to Buenos Aires and Beyond,” a panel discussion with artists Marcelo Brodsky, Jorge Tacla, and Fernando Rosenberg. Moderated by Tufts Professor of History, Peter Winn.  Not actually a Fletcher event, this one takes place at the Aidekman Arts Center.  Fletcher students welcome!

“What Are Numbers? Order and Chaos,” third in this semester’s “The Beauty of Mathematics” series, with Abhishek Maity, MALD ’16.

Social Hour — a weekly event to which all community members are invited to eat, chat, and relax.  Each week’s Social Hour has a different sponsor.  This week, the sponsor is the Arctic Conference.

Monday, March 14:
“Assessing the Costs and Benefits of Mixed and Integrated Farming Systems as an Adaptation Strategy in Mozambique,” a research seminar led by Dr. John Duncan, Fletcher Postdoctoral Scholar of Agriculture, Forests and Biodiversity, sponsored by the Center for International Environment and Resource Policy.  Lunch will be served.

“Apple v. the FBI,” the semester’s second Fletcher Reads the Newspaper event, at which a panel will discuss the legal debate around Apple and the line between security and privacy.

“Extreme Inclusion: A Poverty Graduation Approach in the Arid Lands of Africa,” a discussion of poverty graduation programs in Northern Kenya by Professors Kim Wilson and Jenny Aker, and Kathleen Colson, founder and CEO of the BOMA Project.

Discussion of the current situation in Yemen with Bettina Muscheidt GMAP ’01, Ambassador and Head of Delegation for the European Union to Yemen, sponsored by the Global Master of Arts Program (GMAP), the Institute For Human Security, and the Fares Center for Eastern Mediterranean Studies.

“Understanding the Impact of War and Displacement in Cities: an Information Approach for Urban Settings,” a lecture in the Myron Weiner Series on International Migration at MIT by Fletcher Professor Karen Jacobsen, Acting Director of the Tufts Feinstein International Center.  (For those who can’t get enough of the Fletcher faculty and want to travel to hear them speak.)

Wednesday, March 16:
Board Service: The Why, How, and What It Is Like, of Serving on Boards as Part of a Post-Fletcher Career, sponsored by Fletcher’s International Business Club, the Institute for Business in the Global Context, and the Fletcher Alumni Club of Boston.

“Turmoil in Yemen: Uprising, Civil War and Saudi-Led Intervention,” a conversation and Q&A with Rashed Al Dhaheri, Doctoral Fellow at the Fares Center for Eastern Mediterranean Studies.  (Rashed has since defended his dissertation and can now be called Dr. Al Dhaheri!)

“Israel in Pursuit of Peace: The Role of Religion,” Dr. Tal Becker, fellow at the Shalom Hartman Institute in Jerusalem, sponsored by the Fares Center.

Social Hour — a weekly event to which all community members are invited to eat, chat, and relax.  This week, the sponsor is the Fletcher China Studies Society.

Friday, March 18:
Spring break begins at the end of classes

Friday, March 18-Sunday, March 27:
Fletcher treks!  Groups of students will travel to Cuba and to Israel/West Bank.  These student-organized (and unofficial) educational trips are subsidized, but the groups are limited in size and students must apply to join.

“Technology Transfer and Adoption for Climate Resilience,” a research seminar (over lunch) with Laura Kuhl, doctoral candidate at the Fletcher School, sponsored by the Center for International Environment and Resource Policy.

“Lean Production, Sustainable Consumption: Lessons from the Global Seafood Supply Chain,” a lecture by Roger Berkowitz, President & CEO of Legal Seafoods, sponsored by the Institute for Business in the Global Context.

Tuesday, March 29:
“The Future of FinTech 2.0,” a round table discussion with Arthur Sculley, senior fellow with Fletcher’s Center for Emerging Market Enterprises, sponsored by the Institute for Business in the Global Context.

“Faces Of Our Community,” a TED-style event featuring Fletcher students and other members of the community.

Wednesday, March 30:
“The Hazards in Attempting Rapid Attribution of Cyber Attacks,” a luncheon lecture with Eric Greenwald, General Counsel for the Cybersecurity Company Redacted and former Senior Director for Cybersecurity on the National Security Council Staff, sponsored by the International Security Studies program.

Andrea Glorioso, Counselor for ICT and the digital economy at the Delegation of the European Union to the U.S. will speak on future prospects for digital markets and transatlantic relations in a digital context, as well as ongoing discussions on privacy issues in the EU.  Sponsored by Fletcher’s Cyber Working Group, the Hitachi Center, and the Murrow Center.

“Palestine and Syria: Transition and Upheaval in the Middle East,” lunch discussion with Mouin Rabbani, analyst, commentator and researcher.  Sponsored by the Fares Center.

Thursday, March 31:
“Technologies to Bend the Arc of the Future,” a luncheon lecture with Dr. Arati Prabhakar, Director of the Defense Advanced Research Projects Agency (DARPA), sponsored by IBGC Speaker Series and the Tufts Institute for Innovation.

“Opportunities and Challenges for Peace and Democracy in the African Great Lakes Region,” Thomas Perriello, U.S. Special Envoy for the Great Lakes Region of Africa, sponsored by the Institute for Human Security.

“The Ancients: From the Vedas to Al-jabr,” final session of this semester’s “The Beauty of Mathematics” series, this session sponsored by the Religion, Law, and Diplomacy Club.

Social Hour — a weekly event to which all community members are invited to eat, chat, and relax.  Hosted this week by Fletcher Veterans.

Thursday, March 31 and Friday, April 1:
The Fusion of Religion and Nationalism in Comparative Perspective: Implications for Conflict Dynamics, with keynote speaker Michael Sells, John Henry Barrows Professor of Islamic History and Literature at the Divinity School of the University of Chicago.  What better way to close out a crazy busy month than with a two day conference?

“Climate Change: The Role of the University,” a two-day symposium on the role that universities will play as the world moves to implementing the Paris Agreement, sponsored by the Provost’s Office and the Tufts Institute for the Environment in collaboration with Tufts Climate Action.

And that sums it up.  I wish I could say that I managed to capture every single event during the month, but I know that I didn’t.  Still, even this 90% complete list gives you a sense of how much is happening every day, how diverse the different options are, and how regularly students can score a lunch, for the low price of enjoying a lecture that interested them anyway.