Students aren’t the only members of the community who close out a chapter of their lives at Commencement.  In some years, graduation day also marks the start of a professor’s new less-than-daily relationship with Fletcher. 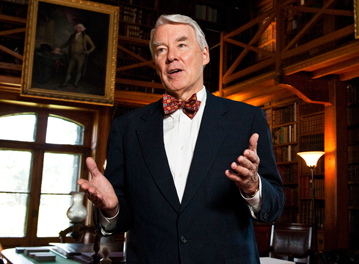 Following this 2015-2016 academic year, Alan K. Henrikson, the Lee E. Dirks Professor of Diplomatic History, and Fletcher’s Director of Diplomatic Studies, will conclude his 44-year teaching career at Fletcher and move on to whatever comes next.  Professor Henrikson has taught U.S. foreign policy to international and U.S. students alike, acquiring a very loyal and devoted following among current students and alumni.

I would describe Professor Henrikson as singularly dedicated to the art of teaching.  I aim to make a distinction here between simply being a great teacher (there are many of them at Fletcher) and putting teaching at the center of everything.  It is in that devotion to the classroom that Professor Henrikson is the leader among his peers.

At the end of the fall semester, the last one in which he would teach DHP D200: Diplomacy: History, Theory, and Practice, Professor Henrikson shared two things with his colleagues on the faculty.  The first was the text of his final exam for the class, and the second was a photo.  He noted:

As you will see, if you have a chance to look through the examination paper, Diplomacy 200, which I think of as the cornerstone of diplomatic studies at The Fletcher School of Law and Diplomacy, “covers” nearly all of the subjects we teach at the School — and, I believe, in an integrating and integrated way.  The students draw from other fields in which they are working, as well as from their own national-cultural and personal experiences.  And, I hope, they bring a diplomatic (and diplomatic-historical) understanding back to their intellectual and other activities in those fields, now and in their future professional careers and lives.

Several members of the faculty responded to Professor Henrikson’s email and I would like to share a few of the responses.  (Note that several current professors were once Fletcher students.)

Professor Diana Chigas, F88: As an alum of D200, I can say that it was an influential course in my Fletcher education, both because of its integrated and historical perspective, and because of the infectious nature of your obvious love for diplomatic history and your commitment to your students.

Professor Ian Johnstone: I saw some of your past exams and was always impressed by the depth and scope, as well as by the way you integrate history and current events.  You outdid yourself this time!  That course is a foundation for so much of what we do at the School.  It is hard to imagine you won’t be teaching it again.

Professor Sulmaan Khan:  I agree with Ian, Alan.  It’s hard to imagine Fletcher and our broader curriculum without your teaching.

Professor Antonia Chayes: Reading your complex and erudite exam, I can only regret that I never had the chance to take your course.  Thank you so much for sharing it with us.

Dean Bhaskar Chakravorti: I will write an essay response to one of your prompts (too tempting to let them go) and will struggle with knotting my bow tie over the holidays in honor of the passing of an era.

Kathleen Ryan, F87, director of the Office of Development and Alumni Relations: Also as an alum of D200, I love seeing this — both the bow ties and the test.  Really glad I took the test when I did!  You cannot know how much you mean to so many former students.  A legend.  So thrilled that you will be giving the Friday night lecture to kick off the reunion in May.  Sure to be wonderful!

Professor Leila Fawaz: A lovely tribute for a cherished teacher.  I am very glad you shared the wonderful photo with us.  We appreciate all you had done for us all at the School and the University.

Professor Elizabeth Prodromou, F83: Thank you for sharing this message and photo, both of which speak to the intellectual excitement, graciousness, and civility, which are your continuing legacy to generations Fletcher students (including many of us among them!).

In a note to me, Professor Prodromou further wrote: “He leaves an extraordinary legacy at Fletcher — his was an approach to teaching, learning, and scholarship that is rooted in a classic understanding of education as a experience in becoming a fuller, enlightened, inquisitive, and alive human being.”

And now the photo from his final D200 class, which will explain all the above references to bow ties, an Alan Henrikson trademark look. 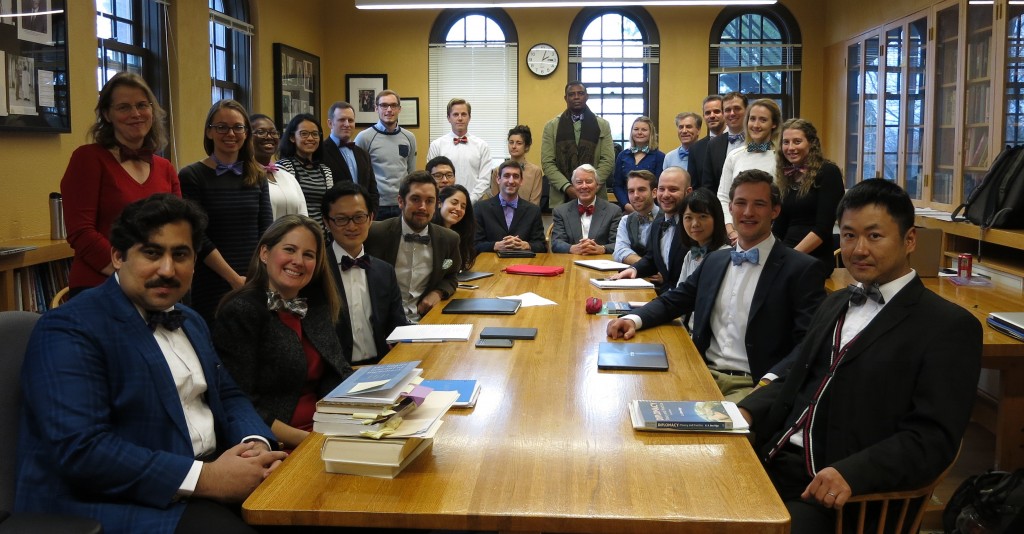 Professor Henrikson will address the community, including this year’s graduates and alumni visiting for their reunion, tomorrow afternoon, on the topic of “Fletcher: A Great Place to Teach.”  I will miss running into Alan Henrikson in the hallways and I wish him the very best.  But I’ll give the final word to Frances Burke, one of Professor Henrikson’s students this year.  When I asked her for her thoughts, Frances wrote:

Whether sitting in Professor Henrikson’s “Diplomacy” class or his U.S. Foreign Relations classes, every moment was a treasure.  His depth of knowledge was, of course, daunting, as each comment on a historical period cascaded into the details of a particular statesman, or comments on esoteric cartography, or asides regarding a special envoy, or opinions on a crucial summit.  Most of us left lectures awestruck by our own ignorance.  Professor Henrikson’s deep, deep knowledge of American history and foreign policy was illuminated by his obvious adoration for his subjects.  During one class, when describing reportage emerging from the Spanish Civil War, he paused to sing a song of the resistance, concluded by a sweet smile and trademark laugh.  You could see how much he loved his calling.  His departure rips a great hole in the grand tapestry of Fletcher teaching, as he so vibrantly twined the threads of history, diplomacy, and foreign relations in a way only a truly gifted teacher can do.