Our next Five-Year Update comes from Vincent Fennell, whom I recall spent quite a bit of time around the Admissions Office during his two years in the MIB program.  I recently caught up with him at an event, and I was reminded why it was so delightful to see him regularly.

I admit there’s a certain irony in writing an update about “life since Fletcher” when I’m currently only 30 minutes away from the Fletcher campus.  However, it’s more a case of things coming full circle, rather than sitting still.  Let me explain. 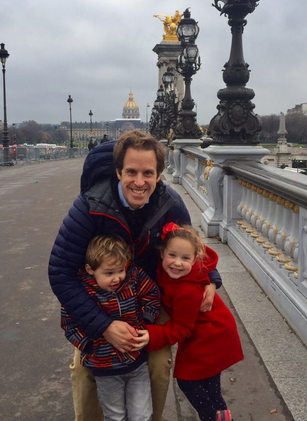 Before I joined the Fletcher MIB class of 2011, I worked at State Street Corporation in Boston.  I decided to pursue an MIB as a way of developing my passion for international business.  I had seen during my time at State Street that no business happens in a vacuum.  There are so many “non-business” variables to an internationally successful business that I felt these were best addressed in an International Affairs School.  I had already lived a pretty international life — albeit tame by Fletcher standards — but I wanted an education that could help me try to make sense of it all, help me become, in the words of the late Dean Bosworth, “culturally fluent.”

After I graduated from Fletcher in 2011, my wife, daughter, and I moved to England where I started a job at the Strategy Office for Hitachi Ltd. in their European Headquarters.  This job came as a direct result of the internship I had in Tokyo with Hitachi the summer before.  In what might be a Fletcher first, I was an Irishman who got a job in London while living in Boston after an internship in Tokyo.

Working for Hitachi was a dream post-Fletcher job for me.  Each and every week felt like an applied session of the courses I had taken at Fletcher.  Some weeks I was involved in Smart City discussions with the Japanese Ministry for Economy in Spain, while other times I was helping lay the foundations for a renewable hydrogen energy storage system at the Nissan test facility at their factory in Sunderland.  At Fletcher I had taken a course on Petroleum in the Global Economy.  This proved to be an invaluable foundation in energy discussions that I referred to constantly.

If I wasn’t focused on Smart Cities, I was helping negotiate the terms of a first of its kind Smart Energy Grid demonstration project in the UK or speaking with the Istanbul municipality about about municipal water network management systems.  This is where I gained a whole new appreciation for my negotiation course and the importance of frameworks and BATNAs (Best Alternatives to a Negotiated Agreement).

Toward the end of my tenure at Hitachi, I was asked to undertake a market analysis on the nascent “Industry 4.0” or Fourth Industrial Revolution.  Industry 4.0, simply put, is a catch-all for the automation of factories.  Through this research and by meeting with a wide variety of software companies and manufacturing companies, I found the catalyst for the next step in my career: digitization.

Digitization and Industry 4.0 were not topics I had really explored in great detail while at Fletcher.  I had taken courses in Innovation and even explored an internship with a few tech startups, but I always thought that I wasn’t “techie” enough.  I’m not a software engineer and didn’t know anything about coding.  What I experienced after Fletcher is the understanding of the critical need for both clear communication and lateral thinking in the technology arena.

Midway through 2015 I was offered a chance to move back to the U.S. and work with my former team at State Street, where I currently lead various internal digitization initiatives.  My role is to help make State Street a market leader in the financial services industry.  Digitization is rapidly changing the realm of possibilities within the financial services sector and the business is significantly different than when I left in 2011.  It’s really exciting to be at the frontier of a changing global industry.

The last thing I want to say is about the Fletcher community.  When I was at Fletcher everyone always talked about the Fletcher family as an invaluable resource.  While I was at Tufts, this was always tangible in the form of people to reach out to with career-related questions.  It wasn’t until I left Fletcher that I realized the true value of this global community.  I feel inspired, fortunate, and proud to be a member of this unique and wonderful tribe.