As I’ve often written before, work at Fletcher in the summer has its own rhythms.  The School remains quiet from late May to early August, but we’re not “un-busy.”  We all have a variety of projects going and that’s before we start the serious prepping that precedes the fall semester.  Meanwhile, because admissions folk tend not to take much vacation time from September to May, we’re all in and out of the office.  I’ve been taking Mondays off, which has made a mess of my usual blog patterns.

When I reported back to work yesterday, I heard the quiet hum of voices around the Hall of Flags and near some of the lecture rooms.  While I was enjoying a long weekend, students in the Global Master of Arts Program had arrived!  These 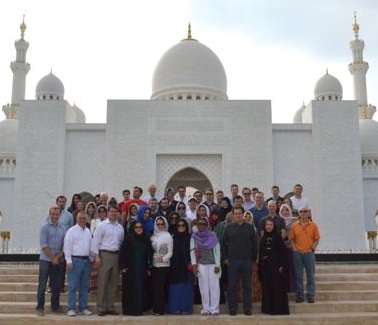 GMAPers will be on campus for two weeks completing their yearlong program, including submitting their Capstone Projects.  Then, on July 31, a new GMAP class will arrive for their first two-week residency.

(For those unfamiliar with the GMAP format, students (who are mid-to-senior-level professionals) bracket their program year with two two-week sessions at Fletcher.  In between the sessions, their fall and spring semesters are delivered via internet-mediated instruction, punctuated by an additional two-week residency out in the world.  The photo to the right shows the program in Abu Dhabi in 2014.)

The truth is, GMAP students have little contact with students in Fletcher’s traditional residential programs.  But after they graduate, GMAP alumni forge the relationships with the larger community that characterize the Fletcher family experience.  They join alumni clubs, attend reunions, and have proven to be strong supporters of MALDs, MIBs, etc., creating the connection that didn’t exist as they pursued their degrees on different academic calendars.

For now, it’s nice to have some company in the building, and we’re happy to welcome GMAP!