It’s great to have the Student Stories bloggers back on campus.  I’m in the process of selecting new writers even as continuing writers are sending me their first posts of the academic year.  Kicking off the summer reports is Mariya.  As it happens, she first wrote about her summer for the Fletcher News & Media page.  Check that out for the details on her work.  Today, she’ll tell us about some of her out-of-office activities. 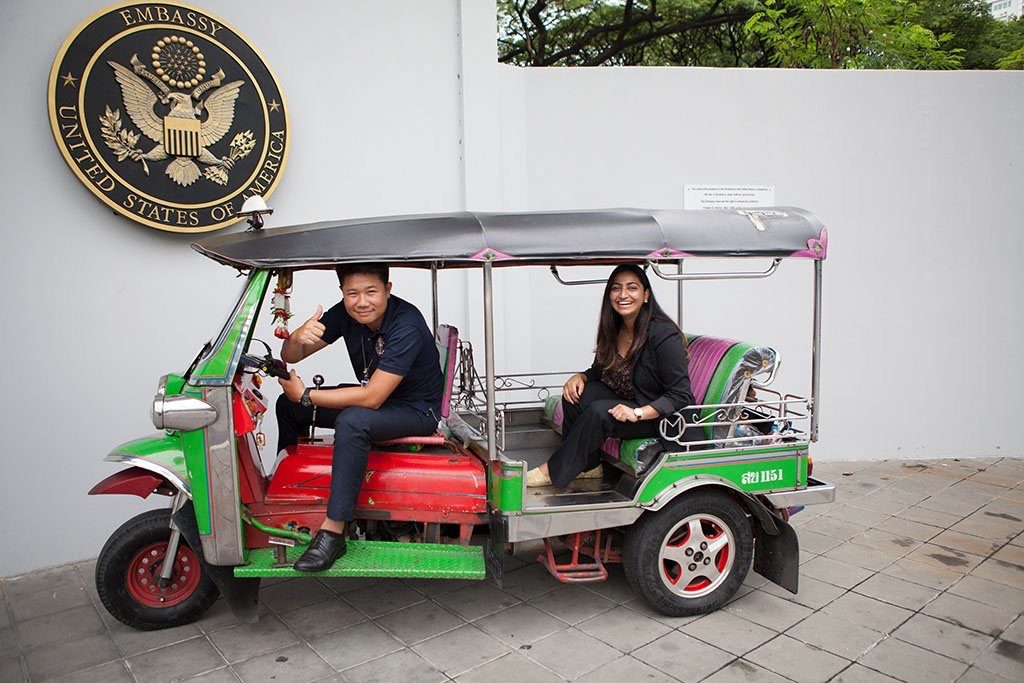 While my internship at U.S. Embassy Bangkok was phenomenal, I want to share with you adventures that occurred outside the office.  Here is an assorted list of 14 unexpected things I did this summer — mostly in Bangkok, but also a few in South Korea and Singapore — that are not mentioned in the interview linked above. 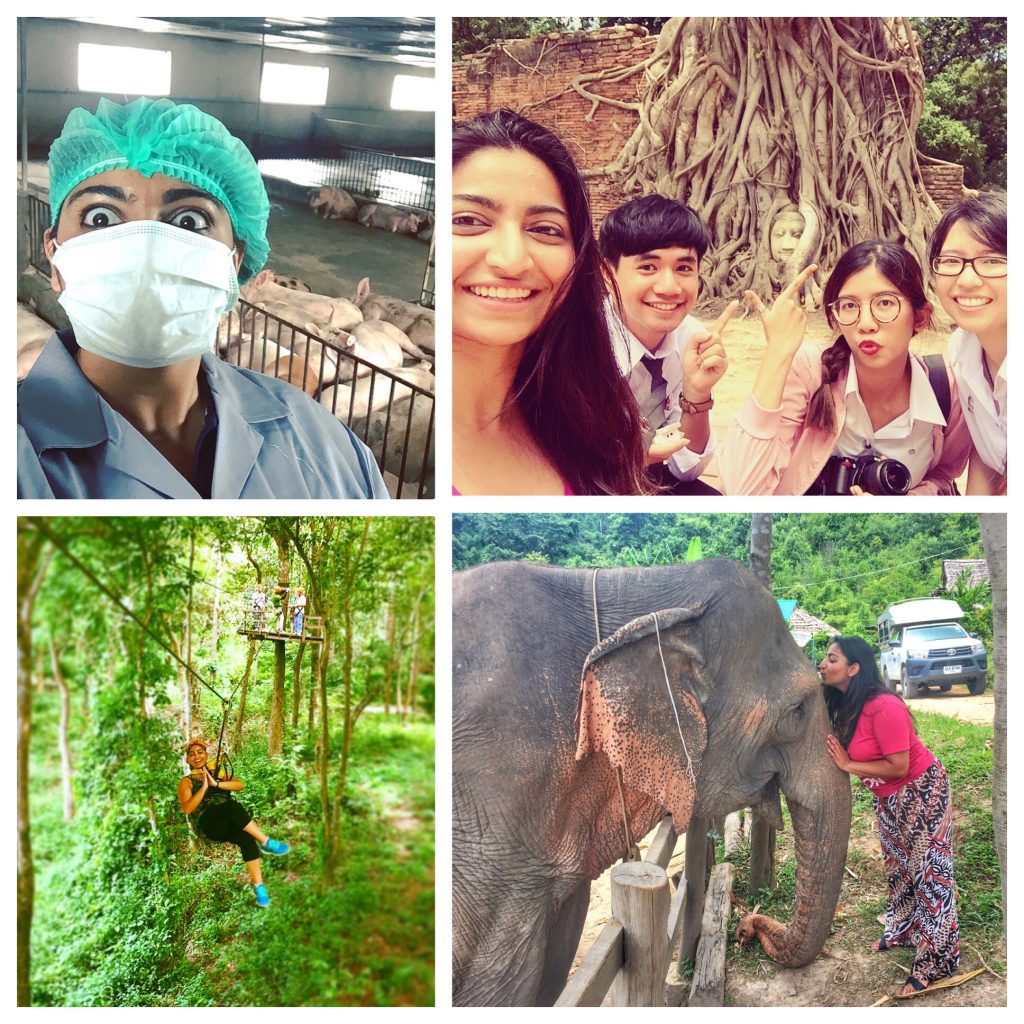 1. Kissed, fed, and bathed with elephants at an elephant sanctuary in the northern city of Chiang Mai.  I learned that elephants are not camera-shy — one of them even flapped his ears in a video with me!  Too bad the elephants were a bit heavy to zip line with me afterward.

2. Became addicted to “boba” (bubble tea), especially green tea flavor.  I also loved coconut water, which I ordered at my every meal; and yes, I carved out the coconut with a spoon afterward.

3. Ate a range of exotic fruits I had never heard of or seen before, including mangosteen, pomelo, rambutan, water chestnuts, dragon fruit, papaya, and durian (known as the “King of Fruits”).  Fresh fruit from the street vendors was only $1.20 — I felt like the queen of fruits.

4. Toured various temples in Bangkok with Fletcher classmates Jittipat and Takuya.  In Thai, “wat” means temple, and it was interesting to learn about and compare the architecture and intricate designs of Wat Pho, Wat Saket (Golden Mount), Loha Prasad, Wat Benja, and the Grand Palace.  “Wat” fun!

5. Interviewed a Fletcher alumni couple, Deputy Chief of Mission Peter Haymond and his wife Dusadee Haymond, over lunch at their home.  Keep an eye out for the exclusive interview coming soon in my next blog post!

6. Visited pork, cattle, poultry, and dairy farms to learn about the efforts of the U.S. Department of Agriculture.  My internship supervisor was keen on my learning about the interagency process at an embassy and I definitely learned a lot about the “farm to table” supply chain process.

7. Shopped until I dropped — literally — at the Chattuchuk Weekend Market.  After a few hours in the heat and maddening crowds at the market, which sold everything you could ever imagine at bargain prices, I would come home and collapse on my bed.

8. Snorkeled for the first time during a speedboat daytrip to Phi Phi Islands with my college friend Dashawn, who was traveling for the first time outside of the United States.  Our weekend in Krabi also included riding ATV’s through a muddy obstacle course, riding an elephant through the jungle, shopping for gifts at the night market, and attempting to hike the monkey-ridden Tiger Cave Trail before sunset.  I am honored that Dashawn spent his first international trip with me. 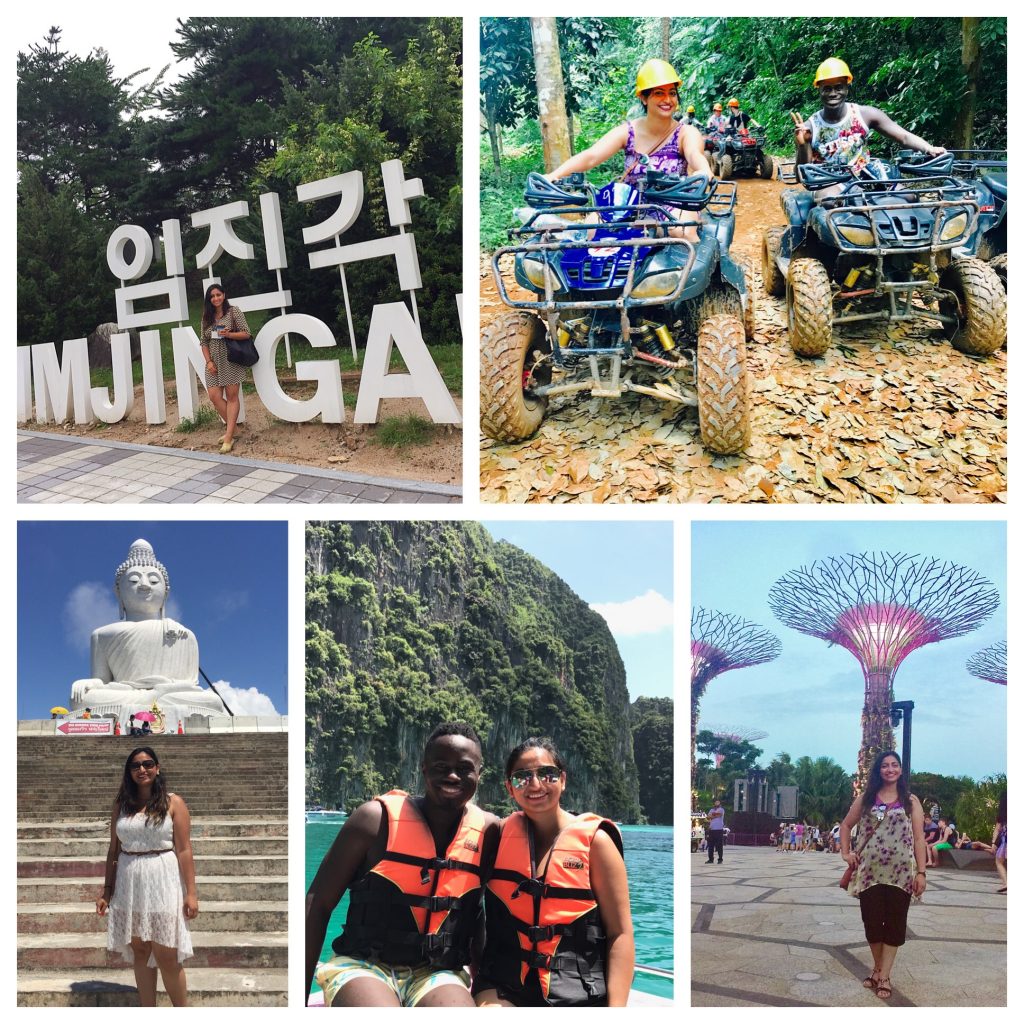 9. Rode motorbikes that weaved through traffic.  While not the safest choice, they were definitely faster than the local “tuk tuk,” Thailand’s version of a rickshaw.

10. Invested in a custom-made suit in Phuket after feeling major FOMO (fear of missing out) when another visiting friend purchased multiple suits for his business school endeavors.  Tuk tuk drivers have a habit of dropping you off at suit stores to lure you in, and it’s quite tempting (case in point), so be careful if you visit Bangkok!

11. Relaxed at the spa at least once a week.  Thai massage is famous for combining acupressure techniques and yoga postures; in other words, compressing, pulling, stretching and rocking your body in every which direction.

12. Was captivated by the beauty of Super Trees and multimedia shows on the waterfront in Singapore.  Shortly after Ramadan, on Eid al-Fitr holiday, I was lucky to tour the Istana, the official residence of the President of Singapore, because it is open to the public only a few times during the year.  Singapore is known for its “racial harmony” and it was beautiful to see a mosque, Hindu temple, and a Buddhist temple lined up on the same street downtown.

13. Walked through the Third Infiltration Tunnel, one of four known tunnels under the border between North Korea and South Korea, as part of a tour of the demilitarized zone (DMZ).  During the DMZ tour, we also visited Imjingak Park, Freedom Bridge, and the Dora Observatory, where I looked across the border into North Korea.  I felt like I was at the juncture of history and present.

14. Had serendipitous encounters with Fletcher friend Angga and a high school friend in Seoul. The Fletcher family, and apparently the West Potomac High community, is in every corner of the world.

A wise man once said, “we have nothing to lose but a world to see.”  With that mindset, I said yes to every adventure that knocked on my door, and blogged, as much as I could, about all of them. 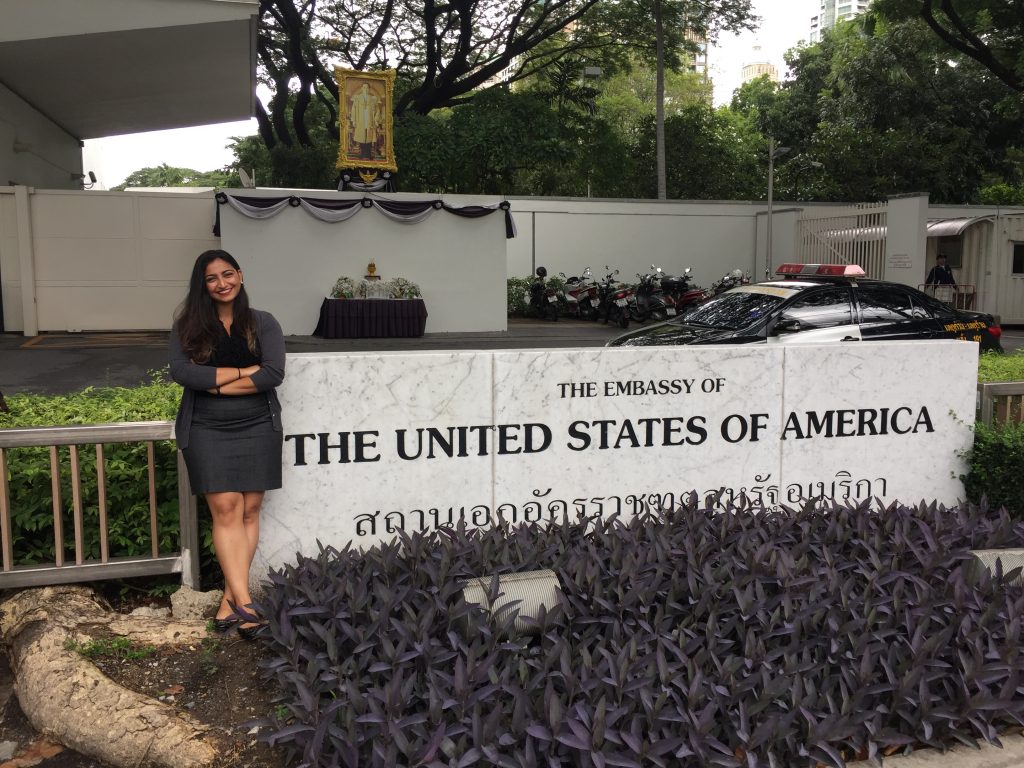