The second of the new Student Stories bloggers is Gary, who started the PhD program in September.  Today he shares the long road that he took to Fletcher.

My path to Fletcher started in 2012.  I was living in the Denver, Colorado area and I’d just completed a two-year stint on the Olmsted Scholar Program, studying for a master’s degree and living in Taiwan with my family.   It was time to pick my next big “stretch” goal.  After doing some research, I discovered that one lucky Marine Corps officer per year was assigned to a fellowship at The Fletcher School.  From the Fletcher website, it looked like a dream come true – immersed in international affairs, surrounded by students from all corners of the globe, making connections and building relationships.  How could I make it happen?  I knew that because of my rank and career timing, it would be a few years before I would be eligible for the fellowship, but in the meantime, I wanted to fill any gaps in my resume to make myself as competitive as possible.  Reflecting back now, this sounds a lot like the advice that Fletcher’s Office of Career Services has provided to all the first-years as we navigate the excellent Professional Development Program, designed to prepare us for post-Fletcher careers just as we begin our studies here. 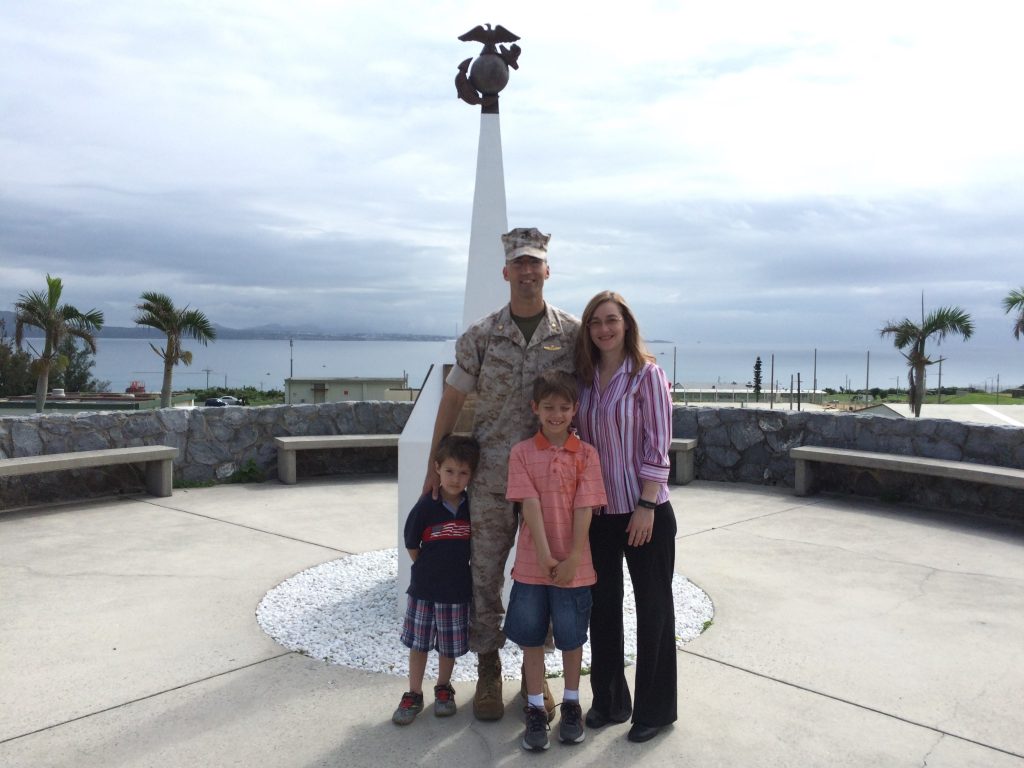 I reached out to that year’s Fletcher Marine Corps fellow to ask how I could maximize my competitiveness for the fellowship.  He wrote back almost right away — his advice was just to keep on doing what I was doing.  And make sure to rank Fletcher at the top of my list when it came time to complete my “dream sheet” ranking of schools and fellowships available for majors, the next military rank higher than mine at the time.  While I was happy to have received a response so quickly, I was a little disappointed with the answer — was there really nothing I could do to prepare as I waited several years to become eligible?

In the summer of 2016, I had been promoted to the appropriate rank and it was time, at last, to fill out my “dream sheet.”  Of all the excellent options, I ranked Fletcher #1, just as I had earlier been told to do.  In the meantime, I had completed an additional master’s degree and been published in a few outlets to maximize my competitiveness.  I put some thought into a rationale for why I should be chosen over all the other majors in the Marine Corps for this opportunity, wrote it up to accompany my dream sheet, and hit send.  More waiting ensued.

The news came through in December 2016.  I was in Okinawa, Japan, near the end of a three-year assignment.  I logged into my email early one morning, and there they were, the results of the selection board – I was going to Fletcher!  Later, I would be told that because of Fletcher’s foreign language proficiency requirement, the officer selected for the fellowship was the first one picked from the entire cohort of several hundred officers.

After the elation of being selected for Fletcher had subsided a bit, I analyzed the situation.  Of course, I still needed to apply and gain admission.  Typically, the Marine officer at Fletcher pursues the one-year mid-career MA degree program, which is ideal for obtaining a great master’s degree while keeping officers close to their normal military career track.  This was the path taken by the Marine Corps’ most famous Fletcher alum, General Joseph F. Dunford, Jr., current Chairman of the Joint Chiefs of Staff, and things turned out well for him!  However, coming into the fellowship I already had two master’s degrees and had recently begun looking for a way to get started on a PhD.  I knew that Fletcher had a great PhD program, but by the time I received notice from the Marine Corps, the application deadline had already passed.  I reached out to the Admissions team, and they agreed to allow me to submit a late PhD application.  I turned my focus to producing a quality application and submitted it as soon as I could.  I’d already been waiting years for this opportunity, but I would have to wait a little longer for the results.  No matter what happened, I was bound to have a positive outcome: in either the MA or PhD program, I would be at Fletcher the following fall.

When the admissions result came back in March 2017, my unit was in the midst of a major theater military exercise involving many foreign partners in Japan and Korea.  I had to read the notice a couple times to make sure my eyes were not playing tricks on me.  Every time I looked at the letter, it still said the same thing: I had been admitted to the PhD program!  I excitedly told my boss, who relayed the news to our organization’s commanding general and, during the busy ongoing exercise, I soon had a brief meeting with Lieutenant General Lawrence Nicholson, who congratulated me in person and told me to do great things, study hard, and make the Corps proud.

Now, as what I believe to be the first active-duty U.S. Marine Corps officer in Fletcher’s PhD program, I continue to work to define the administrative parameters associated with the opportunity.  As I mentioned earlier, Marines typically get only one year at Fletcher — not enough time to make much headway on a PhD.  But I was pleased by the flexibility and openness I found as I worked with key Marine Corps stakeholders.  To my delight, all parties reached an agreement allowing me to have a second year at Fletcher.  During the two years, I should be able to complete the three semesters of coursework required for external PhD admits and the written and oral comprehensive exams in my two concentration areas (International Security Studies and Pacific Asia), and defend a dissertation proposal — ambitious but not impossible to achieve, if planned and executed properly. 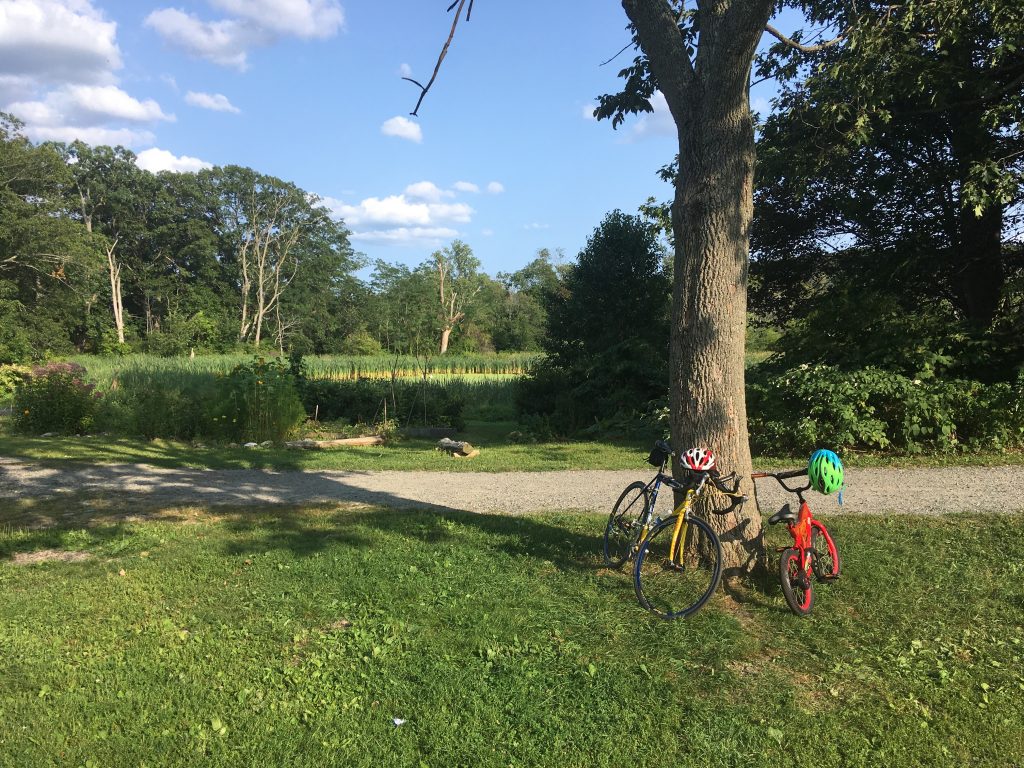 Unlike most other students writing on the Fletcher Admissions Blog, as a career military officer with over 18 years of service, I also come to Fletcher with my family, a wife and two sons.  We’ve greatly enjoyed the few months we’ve had in the Boston area since moving here in July and are looking forward to taking advantage of the diverse range of opportunities and activities in our home community of Arlington and in the surrounding towns, cities, and states.  One simple thing we enjoyed over the summer was easy access to great biking on the Minuteman Bikeway.  Now fall’s brilliant foliage and crisp, cool morning air is a great treat that we haven’t always been able to enjoy as we have moved between Hawaii, California, Taiwan, Colorado, Japan, and now Massachusetts.